You have reached the cached page for https://www.rottentomatoes.com/m/peppermint_2018
Below is a snapshot of the Web page as it appeared on 1/22/2021 (the last time our crawler visited it). This is the version of the page that was used for ranking your search results. The page may have changed since we last cached it. To see what might have changed (without the highlights), go to the current page.
You searched for: peppermint movie We have highlighted matching words that appear in the page below.
Bing is not responsible for the content of this page.
Peppermint (2018) - Rotten Tomatoes
Home
Top Box Office
Tickets & Showtimes
DVD & Streaming
TV
News 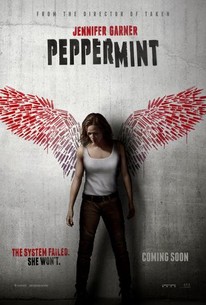 Riley North awakens from a coma after surviving a brutal attack that killed her husband and daughter. When the system shields the murderers from justice, Riley sets out to transform herself from citizen to urban guerrilla. Channeling frustration into motivation, the young widow spends years in hiding -- honing her mind, body and spirit to become an unstoppable force. Eluding the underworld, the police and the FBI, Riley embarks on a deadly quest to deliver her own personal brand of punishment.