You have reached the cached page for https://recession.tips/panic-of-1907/
Below is a snapshot of the Web page as it appeared on 2/21/2021 (the last time our crawler visited it). This is the version of the page that was used for ranking your search results. The page may have changed since we last cached it. To see what might have changed (without the highlights), go to the current page.
You searched for: panic of 1907 wikipedia We have highlighted matching words that appear in the page below.
Bing is not responsible for the content of this page.
The Panic Of 1907 - Recession Tips Press "Enter" to skip to content 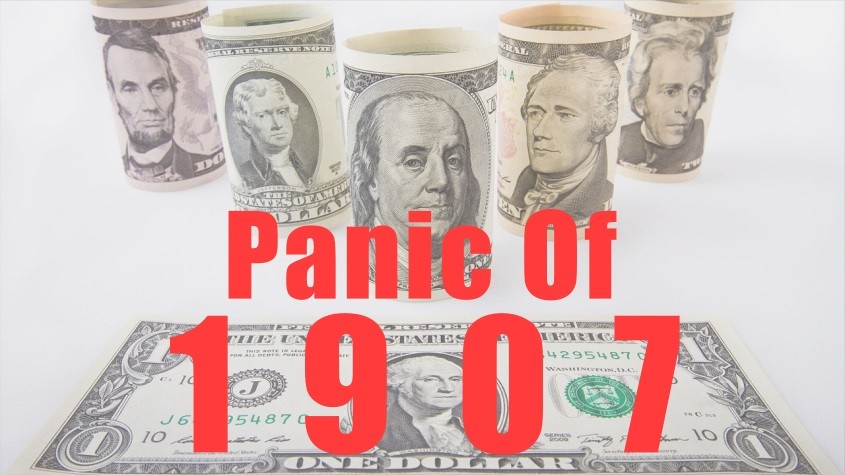 The Panic of 1907 in the U.S., also known as the “Knickerbocker Crisis”, resulted in an unprecedented stock market crash at a time of economic prosperity. The rise of ‘trust companies’ and the risks they brought with them had been ignored a little too long.

In the early 1900s, the U.S was experiencing unprecedented economic growth. Key industries of the era included iron and steel, printing and publishing, lumber, liquor, cotton and textiles, and various industries related to construction. The American population underwent a period of significant growth, growing from 31 million in 1860 to 92 million by 1910.

Having recovered from the 1893 depression, and with a few prospectors making their fortunes on the Klondike Gold Rush, the economy was once again on a clear expansion path. Americans had been urbanizing and moving to cities steadily throughout the Second Industrial Revolution, and by 1900, as many as 40% of Americans lived in cities. This saw electrification become another leading industry in the early 1900s.

With this sturdy, structural growth, the appetite for the rewards of risk grew, particularly in financial markets. The growth, founded in construction and human settlements, was tangible. The growing economy had seen an increase in the use of financial and corporate institutions such as trust companies, and stock prices had been growing steadily.

In the latter part of the decade, however, things began to change. The 1907 financial crisis soon brought the financial sector to a grinding halt. A sudden stock market crash brought with it a major credit crunch.

Much of the growth of the era was centered around key players in the industrial space, as was frequently the case in America’s industrial history. The Merger movement, which began in 1895 following the 1893 panic and depression, saw sustained centralization of market power and wealth. Andrew Carnegie dominated the steel industry, while Rockefeller practically owned the country’s oil supplies. These industry giants monopolistically grew the U.S. economy throughout the Gilded Age, which lasted until around 1900 by some accounts.

In 1900, America returned to the Gold Standard, bringing to an end the exchange of silver for gold. With the centralization of financial power in markets, and the return to Gold Standard, new financial innovations began to emerge along with the rise of financial capitalism.

The Great Merger Movement in America also gave rise to one particular financial innovation. The rapid rise of trust companies added a layer of instability and turned out to be a major engine for the 1907 financial crisis.

At the time, trust companies competed with banks for deposits, and trades, but were subject to lower reserves and were not regulated by the financial system in the same way that the banks were. What began as mainly insurance houses for wealthier clients, grew into a burgeoning financial industry which fueled mergers, and added substantially to the GDP growth of the time.

By 1907 they were substantial lenders to the New York equity markets, and were well entrenched, but were not required to hold collateral for these loans. They became a critical part of a process of clearing trades using call loans (unsecured overnight loans), instruments which chartered commercial banks could not use. This gave a false sense of liquidity to the market, and as investors realised this overnight period of zero-collateral and rapidly withdrew funds from trust companies, this essential liquidity source was soon taken out of play.

In 1906, a major earthquake in San Francisco resulted in a liquidity crunch as much needed resources were drawn to the devastated city. Although a seemingly isolated event, the effects of this were felt throughout the country.

Although there is a complex set of underlying causes for the panic of 1907, the trigger, like in most stock financial panics, started with a few men, and an asset – in this case, shares in United Copper.

The result was a run on banks which lasted weeks and left few unscathed. Two investors, namely Heinz and Morse took a speculative investment in a copper mining company: United Copper. The pair aimed to ‘corner the market’ for shares in United Copper. It was on October 16th 1907 that the two men aimed to take a critical mass of United Copper stock, and failed.

When their scheme failed, depositors in any banks associated with the pair hurried to secure their funds, and this loss of confidence soon spread to many state and local banks, affecting businesses throughout the country. The New York Clearing House made a public announcement four days later, assuring investors that the banks had been investigated and were solvent, but this did little to stem the panic. The clearing house continued to have to be the ultimate lender against loans to keep the banks afloat.

From this point, things moved fast. The National Bank of Commerce aimed to secure Knickerbocker Trust with a generous credit extension to cover the sudden massive withdrawals, under the assumption that the New York Clearing House would honor this transaction with a loan to the bank.

Under scrutiny for allowing Trust Companies to operate with too little oversight, this request for a loan on behalf of the Knickerbocker Trust was declined. Such concessions were, after all, reserved for members of the clearing house payments system – the Clearing House Association, which never extended to trust companies.

J. P. Morgan, on hearing about the panic, hitched his Pullman to a steam engine and made his way back to New York overnight. He was 70 and his experience of rescuing wayward institutions in the time of financial crisis no doubt made him well aware of what was to come. In an instant amplification of panic so often seen in overly leveraged financial markets, this news, that Knickerbocker did not qualify for help, was applied by the public to trust companies in general, and rightly so.

J. P. Morgan galvanized people into action and set about stabilizing the panic. On closer investigation by a group of financiers who aimed to rescue a number of institutions after the crisis, with J. P. Morgan at the helm, Knickerbocker was found to be insolvent, but by this stage, the message to the public was clear. The run on banks and trust companies was a frenetic scramble to collect hard cash as fast as possible.

Even after distancing itself from the businessmen connected to the scandalous speculators, the National Bank of Commerce was forced to sever ties as the clearing house for Knickerbocker, and the following day, after losing some $8 million in demand deposits, Knickerbocker ceased to operate.

The panic which ensued took place over a three-week period in October and November of 1907. The financial crisis was so severe that the New York Stock Exchange saw a year-on-year decline of some 50%. Following the run on Knickerbocker Trust, depositors began pulling money out of a number of banks and trusts.

The panic of 1907 led to the founding of the U.S. Federal Reserve system, which was enacted in 1912. The American public had witnessed one too many financial crises, and the Federal Reserve System allowed for centralized control of the money system. The idea was to place the government in a better position to be able to deal with future panics. This body sets levels of required reserves and are ultimately responsible for overseeing banks.

Another outcome was a growing skepticism about J. P. Morgan and other New York bankers. Although they too lost in the Panic of 1907, J. P. Morgan achieved a de facto monopoly after the crisis. A special committee, the Pujo Committee, was convened, and Morgan was thoroughly interrogated. He held, through his testimony, that banking and financial transactions are founded in trust and character, and are fundamentally psychological in nature. The famous exchange is as follows:

Untermeyer: “Is not commercial credit based primarily upon money of property?”

Morgan: “No, Sir, the first thing is character.”

Untermeyer: “Before money or property?”

Morgan: “Before money or anything else. Money cannot buy it … a man I do not trust could not get money from me on all the bonds in Christendom.”

Morgan died shortly after the end of the hearings. The main outcome was resolution around the Lender of Last Report, a pivotal role of central banks to this day.

The panic of 1907, or also known as the “Knickerbocker Crisis”, was one of the most severe recessions in the United States that occurred when the stock market crashed by 50%.

The panic of 1907 was the first financial crisis of the twentieth century and considered the most severe bank panic that affected the national banking system of the United States.

Despite its destruction, the panic of 1907 was also considered as the most transformative panic, as this recession led to the creation of the Federal Reserve System.