You have reached the cached page for https://www.usgs.gov/core-science-systems/national-geospatial-program/us-topo-maps-america
Below is a snapshot of the Web page as it appeared on 6/23/2021 (the last time our crawler visited it). This is the version of the page that was used for ranking your search results. The page may have changed since we last cached it. To see what might have changed (without the highlights), go to the current page.
You searched for: national topographic system wikipedia usa We have highlighted matching words that appear in the page below.
Bing is not responsible for the content of this page.
US Topo: Maps for America
Skip to main content
National Geospatial Program+
Science+

Employees in the News

US Topo: Maps for America

Building on the success of more than 130 years of USGS topographic mapping, the US Topo series is a new generation of maps of the American landscape. US Topo topographic maps are produced by the National Geospatial Program of the U.S. Geological Survey (USGS). The project was launched in late 2009, and the term “US Topo” refers specifically to quadrangle topographic maps published in 2009 and later. These maps are modeled on the familiar 7.5-minute quadrangle maps of the period 1947-1992, but are mass-produced from national GIS databases on a repeating cycle. US Topo maps repackage geographic information system (GIS) data in traditional map form; this benefits non-specialist map users, as well as applications that need traditional maps.

US Topo maps can be downloaded free of charge from several USGS websites. All maps can be viewed and printed with Adobe Reader or comparable PDF viewing software. Limited GIS functionality, such as displaying ground coordinates, is available with all maps, and the layered construction of the PDF files allows users to turn data layers on and off.

The maps include layers not present on most traditional topographic maps, such as aerial photo and shaded relief images. Many additional feature classes have been added over the life of the project, and new and better data sources have been found for others. A challenge has been finding national datasets for all the feature types of a traditional topographic map. See this FAQ for more information about specific layers.

US Topo maps are produced by the USGS National Geospatial Technical Operations Center. The first 3-year production cycle for the conterminous 48 states was completed in September 2012, and the second in September 2015. The third cycle is planned for completion in 2018. Hawaii, Puerto Rico, and US Virgin Islands also have US Topo coverage. Alaska has partial coverage, which is expected to be completed in 2022.

More information about US Topo maps:

How US Topo Maps Differ from Traditional USGS Topographic Maps

Historical Topographic Maps - Preserving the Past 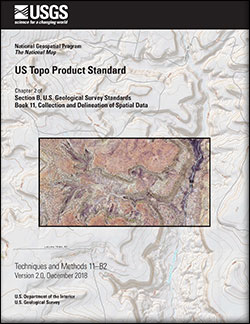 This document defines a U.S. Geological Survey (USGS) digital topographic map. This map product series, named “US Topo,” is modeled on the now historical USGS 7.5-minute (1:24,000 scale) topographic map series produced and printed by the USGS from 1947 to 2006. US Topo maps have the same extent, scale, and general layout as the historical... 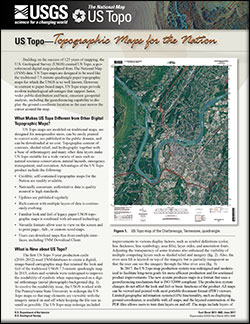 US Topo—Topographic maps for the Nation

Building on the success of 125 years of mapping, the U.S. Geological Survey created US Topo, a georeferenced digital map produced from The National Map data. US Topo maps are designed to be used like the traditional 7.5-minute quadrangle paper topographic maps for which the U.S. Geological Survey is so well known. However, in contrast to paper-...