You have reached the cached page for https://eleceed.fandom.com/wiki/Eleceed_Wiki
Below is a snapshot of the Web page as it appeared on 11/24/2021 (the last time our crawler visited it). This is the version of the page that was used for ranking your search results. The page may have changed since we last cached it. To see what might have changed (without the highlights), go to the current page.
You searched for: my dear cold-blooded king manga sub indo We have highlighted matching words that appear in the page below.
Bing is not responsible for the content of this page.
Eleceed Wiki | Fandom
Eleceed Wiki
Register
Don't have an account?
Sign In
Advertisement 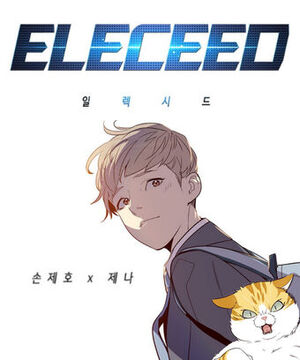 Eleceed is a fantasy and action Korean Webtoon written by Son Jae Ho and illustrated by ZHENA. It can be found on Naver (in Korean) and WEBTOON (in English). It's updated every Tuesday and is rated 9.9/10.0 stars on Webtoons.

Jiwoo is a kind-hearted young man who harnesses the lightning-quick reflexes of a cat to secretly make the world a better place – one saved little child or foster pet at a time. Kayden is a secret agent on the run, who finds himself stuck in the body of a…um…decidedly fat old fluffy cat. Together, armed with Jiwoo’s superpowers and Kayden’s uber-smarts, they’re out to fight those forces who would let evil rule this world. That is, if they can stand each other long enough to get the job done.