You have reached the cached page for https://www.dailymail.co.uk/tvshowbiz/article-4129742/Kate-Bosworth-gazes-adoringly-husband-Michael-Polish.html
Below is a snapshot of the Web page as it appeared on 12/3/2020 (the last time our crawler visited it). This is the version of the page that was used for ranking your search results. The page may have changed since we last cached it. To see what might have changed (without the highlights), go to the current page.
You searched for: michael polish We have highlighted matching words that appear in the page below.
Bing is not responsible for the content of this page.
Kate Bosworth gazes adoringly at husband Michael Polish | Daily Mail Online

The look of love! Kate Bosworth looks elegant in beaded LBD as she gazes adoringly at husband Michael Polish at fashion show in Berlin

By Ekin Karasin For Mailonline

They tied the knot in a lavish Mexican-inspired wedding three years ago.

But Kate Bosworth and Michael Polish looked as loved-up as ever as they attended Marc Cain's Fall/Winter '18 collection in Berlin, Germany, on Tuesday.

The beaming actress, 34, looked incredible in an intricately beaded LBD as she wrapped an arm around the handsome director, 46, during Mercedes-Benz Fashion Week. 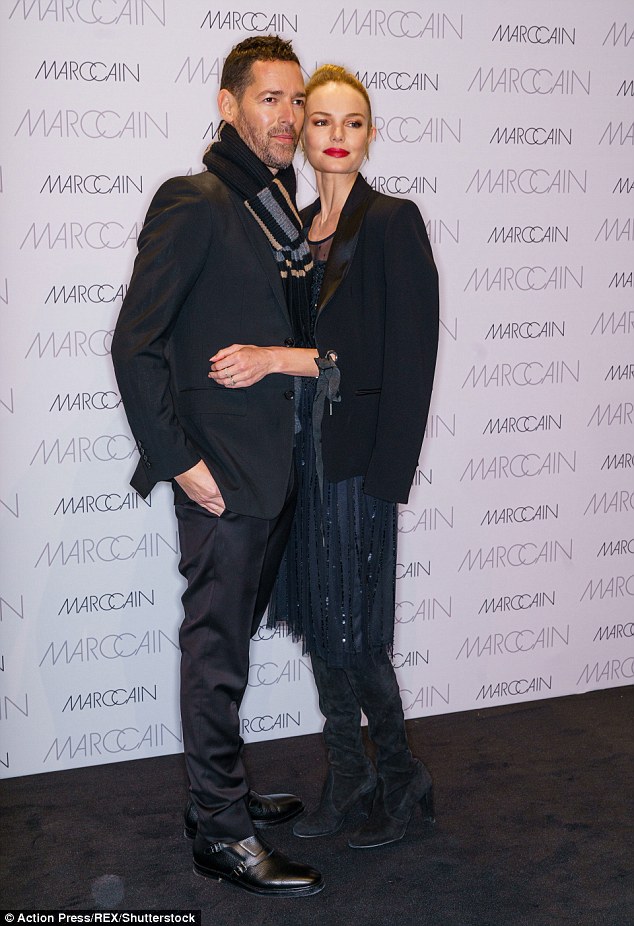 Cute couple! Kate Bosworth, 34, and Michael Polish, 46, looked as loved-up as ever as they attended Marc Cain's Fall/Winter '18 collection in Berlin, Germany, on Tuesday

The blonde beauty ruled the black carpet in the embellished dress, which featured a delicate semi-sheer panel and tulle skirt.

Sticking to a classic monochrome palette, the actress added some knee-high black suede boots and a box clutch.

Scraping her blonde hair into a sleek topknot, Kate showcased her alabaster skin with a slick of berry lipstick and smoky eyeshadow. 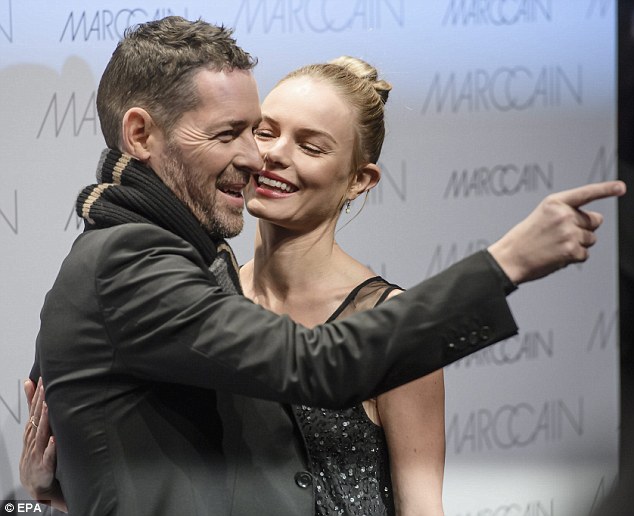 The look of love: Kate gazed adoringly at her husband

Kate spoke candidly about her love for Michael in an interview with Marie Claire last year.

After meeting on the set of Big Sur in 2012, she explained: 'There are so many people that hook up on movies, and you wonder if that's real, so we didn't go there.

'I think we were both experienced to know that if this was the real deal, we could wait to see what would happen.' 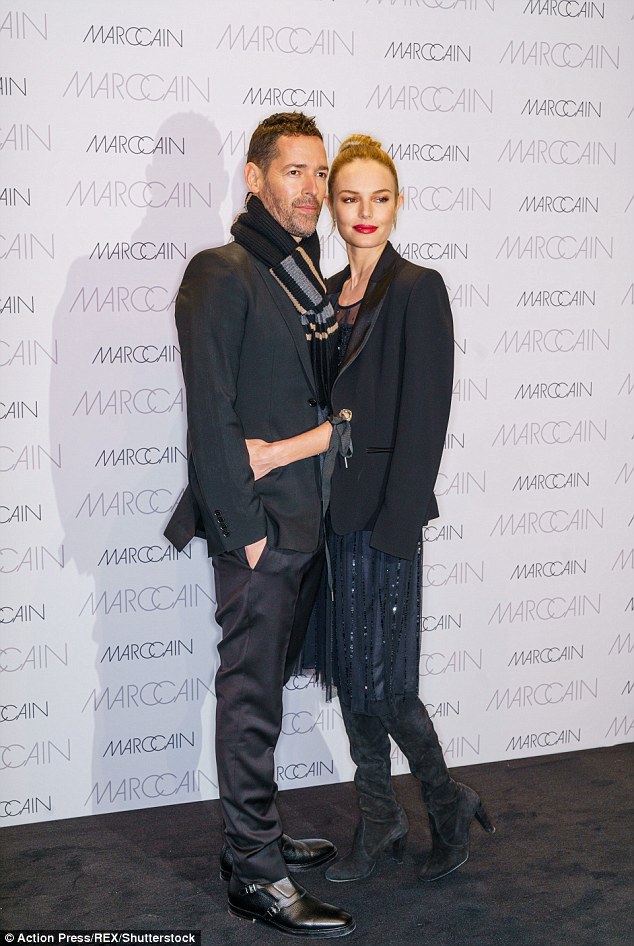 Looking dapper: Michael looked smart in a navy suit with monk shoes and a striped scarf 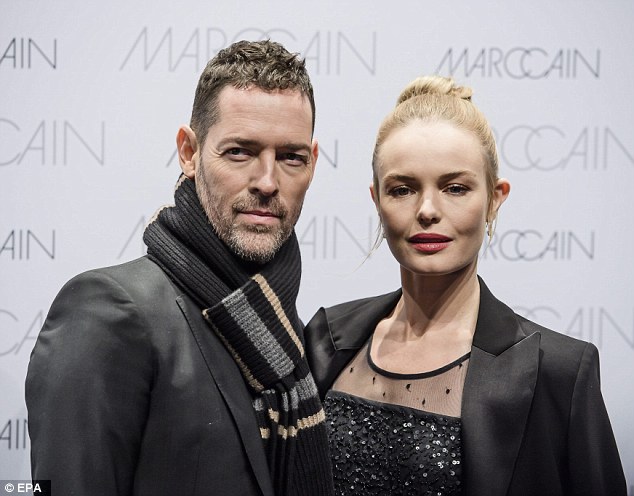 Sweet: The couple married in 2013, a year after meeting on the set of Big Sur 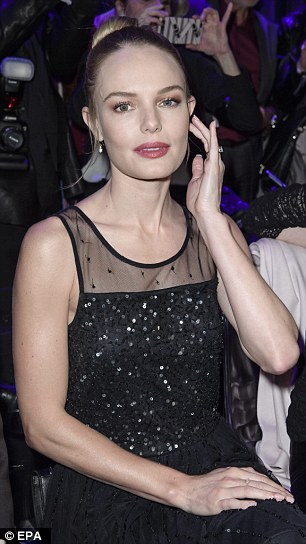 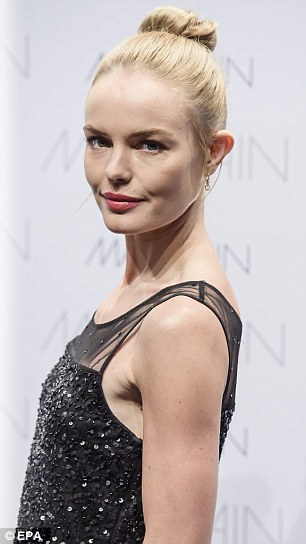 Stunning: Scraping her blonde hair into a sleek topknot, Kate showcased her alabaster skin with a slick of berry lipstick and smoky eyeshadow 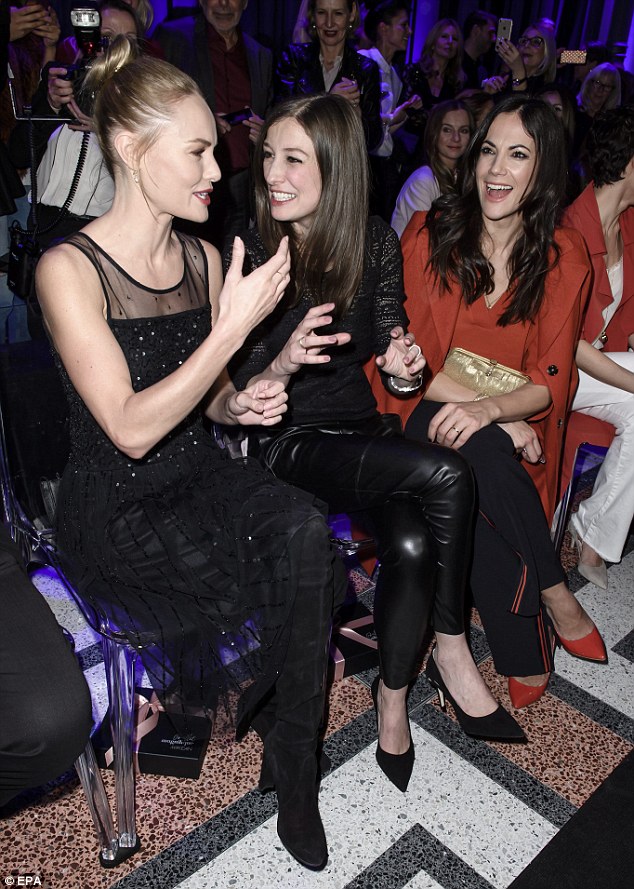 Having a whale of a time! Kate mingled with actresses Alexandra Maria Lara and Bettina Zimmermann talk prior to the presentation of the Fall/Winter 2017/18 collection by Marc Cain 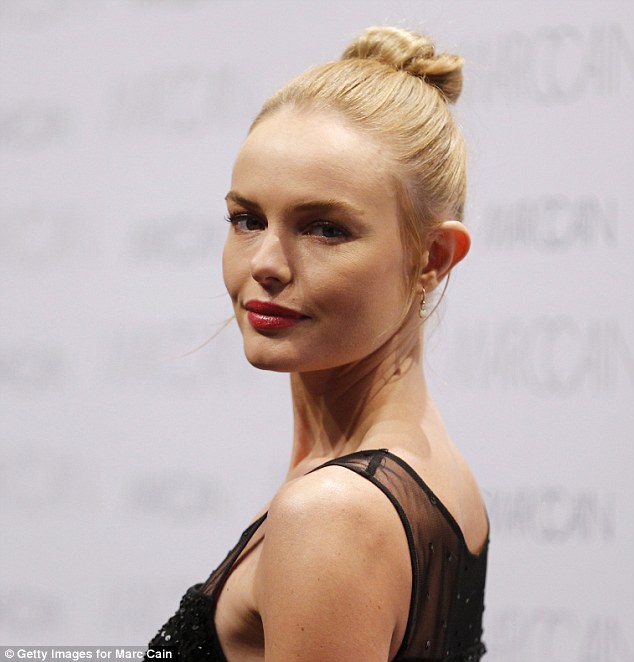 Ready for her close-up: Kate oozed Old Hollywood glamour with her pared-back outfit 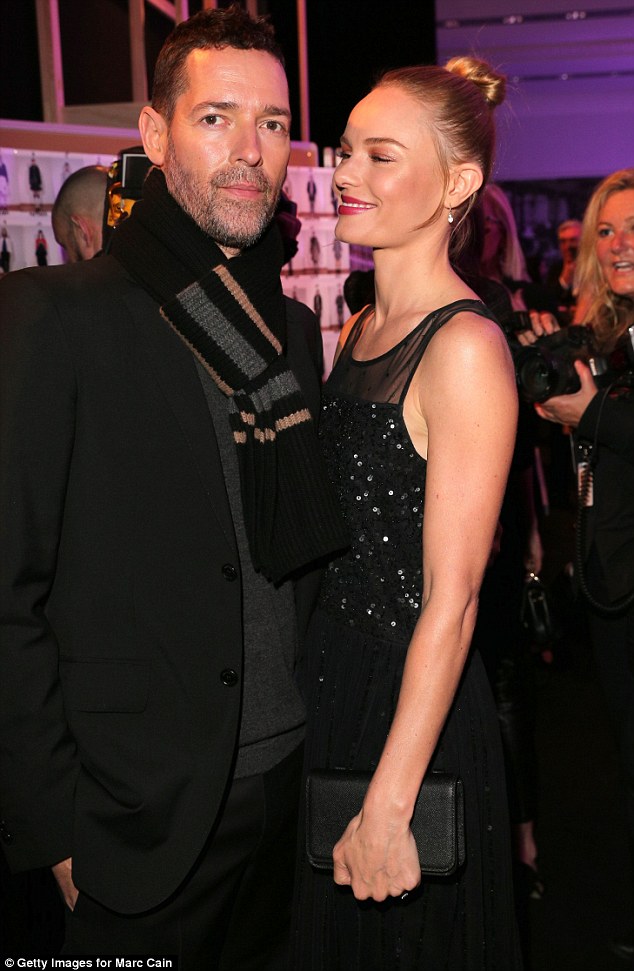 Cosy couple: Kate and Michale looked every inch the cosy couple, sticking close to each other's sides during the fashion show 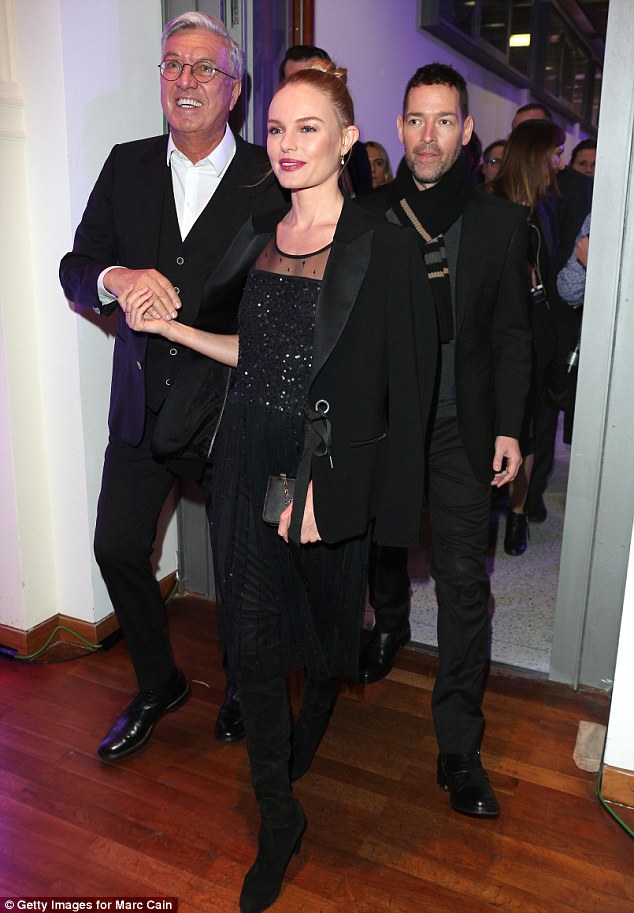 VERY fashionable friends: The couple joined Hlemut Schlotterer, the founder of Marc Cain at the show 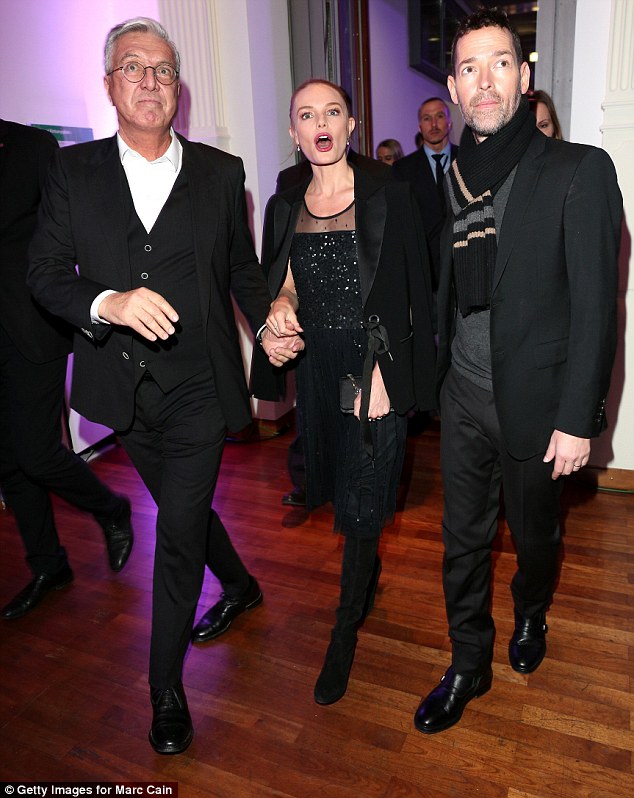 V.I.Ps: The couple appeared to be Helmut's guests of honour at the show 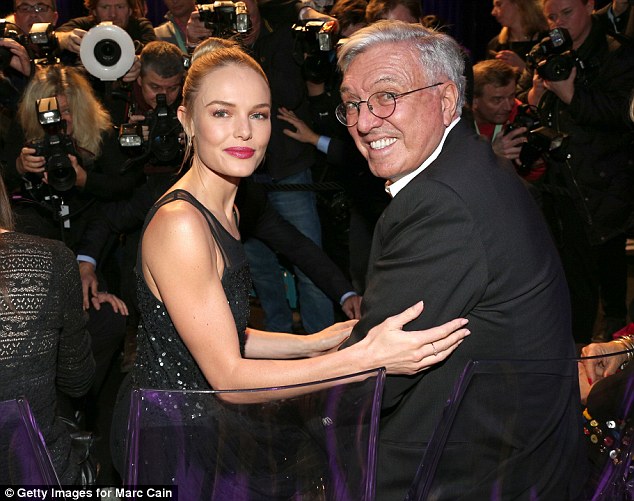 On the FROW: Kate and Helmut were all smiles as the man behind the brand and the actress were snapped together on the FROW 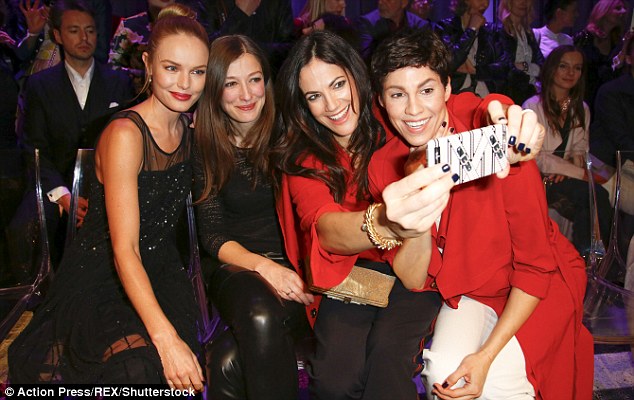 In good company: Kate was joined by (L-R) Alexandra Maria Lara, Bettina Zimmermann and Jasmin GeratMalaikaraiss on the front row

True love blossomed and they got married on August 31, 2013 at The Ranch at Rock Creek in Philipsburg, Montana.

In marrying Michael, Kate is now step-mother to Jasper, his 16-year-old daughter from his first marriage to makeup artist Jo Strettell.

Michael popped the big question to Ms Bosworth during a visit to South Korea after a year of dating.

He presented her with a platinum and diamond engagement ring from 1920s France, purchased from a jewelry store in New York. 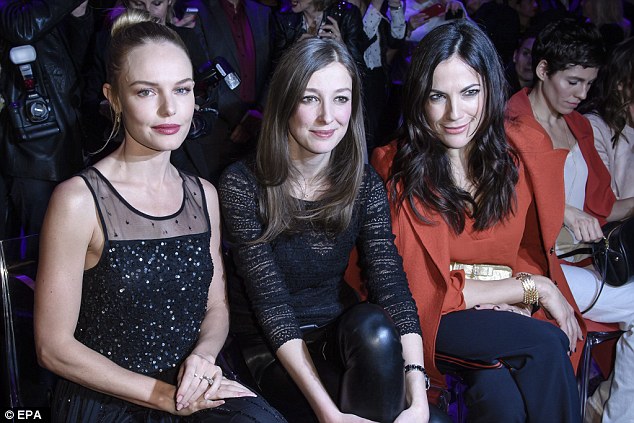 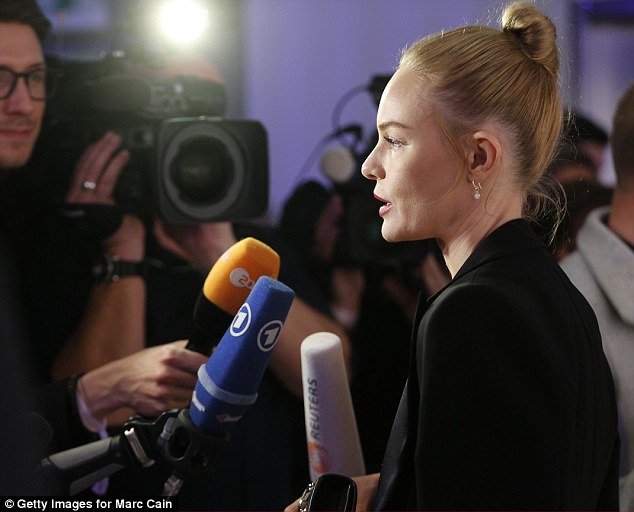 Poised: The actress looked composed as she chatted away on the black carpet 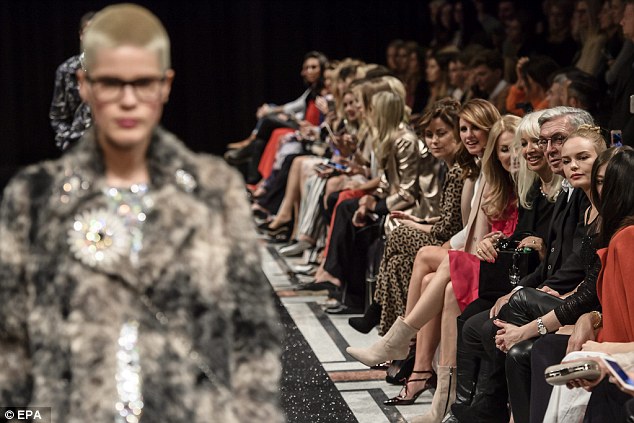 Opulent: The Marc Cain show was full of models swathed in fur and sequins 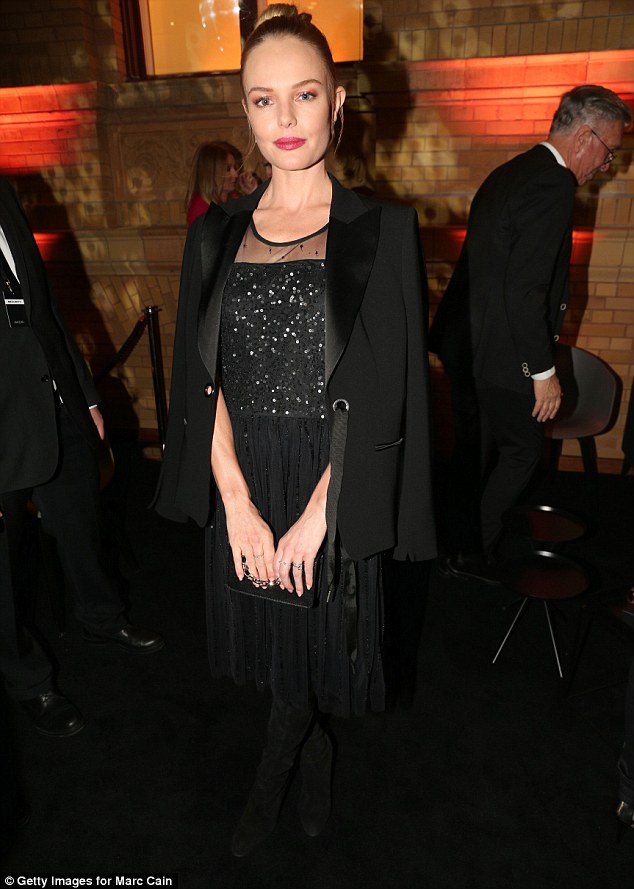 Chic: The actress looked the epitome of chi and understated style as she mingled with other fashionistas after the show 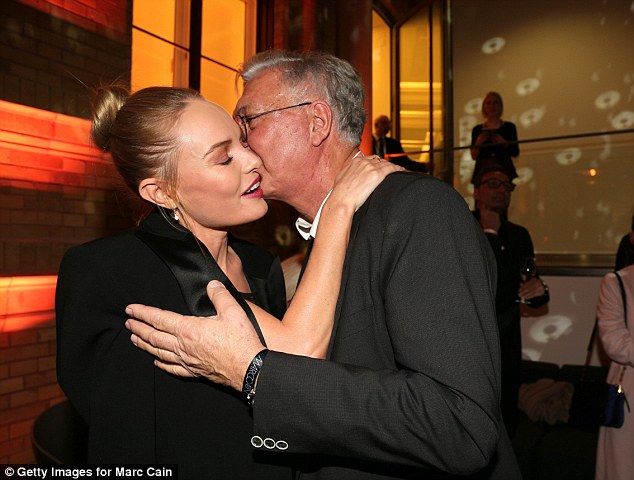 Congrats! Helmut and Kate shared a touching moment after the show