You have reached the cached page for https://wikimili.com/en/Mauser_Model_1895
Below is a snapshot of the Web page as it appeared on 10/19/2020 (the last time our crawler visited it). This is the version of the page that was used for ranking your search results. The page may have changed since we last cached it. To see what might have changed (without the highlights), go to the current page.
You searched for: mauser chileno 1895 wikipedia We have highlighted matching words that appear in the page below.
Bing is not responsible for the content of this page.
Mauser Model 1895 - WikiMili, The Best Wikipedia Reader

The Mauser Model 1895 is a bolt operated magazine fed rifle using the 7×57mm Mauser cartridge. It was exported to many overseas powers, including the Chilean forces which adopted as the Fusil Mauser Chileno Mo 1895. [1] It is the first major modification of the Mauser Model 1893 and was produced by Deutsche Waffen und Munitionsfabriken, known as DWM, and Ludwig Loewe Company from 1895 to 1900. [2]

The Model 1895 was also deployed to republic of the Orange Free State and the South African Republic (more commonly known as “Transvaal”) by DWM shortly after the Jameson Raid in December 1895 to deal with the shortage of modern magazine fed rifles for the state army. [1] Roughly 50,000 Mauser rifles were ordered but only 37,000 were delivered because DWM diverted them to fulfill their contract with the Chilean army. [2] Due to many rifles being diverted to Chile, many of the rifles in that country bore the inscription “O.V.S” (Oranje Vrij Staat), Orange Free State. The Model 1895 brought to the “Transvaal” was also known as "Boer Model" Mauser [3] and were marked “O.V.S” (Oranje Vrij Staat) just above the serial number accompanied by MOD.MAUSER and the date of the manufacturer. Because of this issue, a misunderstanding occurred regarding the identification between the Model 1896 and Model 1897. At the time, an Afrikaans farmer (Also known as a Boer) could purchase a Mauser Model 1895 at a price of £3, another variant known in Afrikaans as Plezier Mauser was sold slightly above cost by the respective governments and private dealers for sport and private use. [4] These rifles varied in stock style, barrel, sight lines and ornamentation. Some of the last rifles delivered by DWM were equipped with turned down bolt handles which made them suitable for the South African farmers on horseback. Work on the manufacturing of the Mauser Model 1895 was halted in 1899 by the Second Boer War. [1]

The Mauser Model 1895 also saw service in Mexico, Costa Rica, Paraguay, Iran, El Salvador and Honduras. [1] Mauser Model 1895 rifles and carbines were the standard weapons of the various Mexican armies during the Mexican Revolution [5] while the Paraguayan rifles saw combat during the Chaco War. [6]

The Mauser Model 1895 is a modification of the Mauser Model 1893. The flush-mounted staggered column box magazine has a capacity of 5 smokeless powder 7×57mm Mauser cartridges. [7] The magazine can be loaded from a stripper clip, or with individual rounds. The stock has a straight wrist and a handguard which stretches from the receiver ring to the lower barrel band. The upper band has a lug for the Model 1895 bayonet.

Also known as the Carabina Mauser Chilena Modelo 1895, this shortened variant was primarily designed for cavalry and artillery. This model is similar in design to the Mauser Model 1895 except for the fact that it is smaller. It is only 37.3 in (947 mm) long with an 18.3 in (465 mm) barrel. It was also closely related to the short rifle except that the sling swivels are on the left side of the barrel band and on the stock behind the wrist. It also has the same modified form of the bent bolt handle as the short rifle. [2] 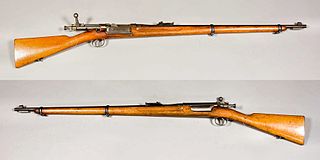 The Krag–Jørgensen is a repeating bolt action rifle designed by the Norwegians Ole Herman Johannes Krag and Erik Jørgensen in the late 19th century. It was adopted as a standard arm by Denmark, the United States and Norway. About 300 were delivered to Boer forces of the South African Republic.

Mauser, originally Königliche Waffen Schmieden, is a German arms manufacturer. Their line of bolt-action rifles and semi-automatic pistols has been produced since the 1870s for the German armed forces. In the late 19th and early 20th centuries, Mauser designs were also exported and licensed to many countries which adopted them as military and civilian sporting firearms. The Mauser Model 98 in particular was widely adopted and copied, and is the foundation of many of today's sporting bolt action rifles.

The SKS is a Soviet semi-automatic carbine chambered for the 7.62×39mm round, designed in 1943 by Sergei Gavrilovich Simonov. Its complete designation, SKS-45, is an initialism for Samozaryadny Karabin sistemy Simonova, 1945. The SKS was an extremely reliable, simply constructed weapon with two unique distinguishing characteristics: a permanently attached folding bayonet, and a hinged non-detachable magazine. However, it was incapable of fully automatic fire and limited by its ten round magazine capacity, and was rendered obsolescent by the introduction of the AK-47 in the 1950s. The SKS was only briefly a standard infantry weapon in front-line units of the Soviet Armed Forces before being replaced by the AK-47. 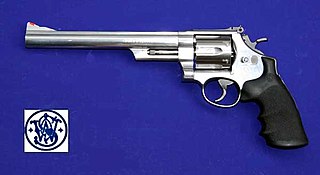 The Smith & Wesson Model 29 is a six-shot, double-action revolver chambered for the .44 Magnum cartridge and manufactured by the United States company Smith & Wesson. 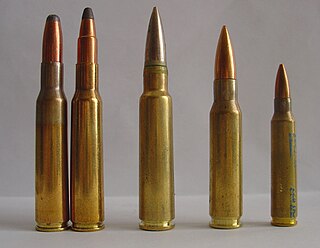 The 7×57mm Mauser (designated as the 7mm Mauser or 7×57mm by the SAAMI and 7 × 57 by the C.I.P. is a first-generation smokeless powder rimless bottlenecked rifle cartridge. It is known as .275 Rigby in the United Kingdom. It was developed by Paul Mauser of the Mauser company in 1892 and adopted as a military cartridge by Spain in 1893. It was subsequently adopted by several other countries as the standard military cartridge, and although now obsolete as a military cartridge, it remains in widespread international use as a sporting round. Many sporting rifles in this calibre were made by British riflemakers, among whom John Rigby was prominent; and, catering for the British preference for calibres to be designated in inches, Rigby called this chambering the .275 bore after the measurement of a 7 mm rifle's bore across the lands.

The Mannlicher M1895 is a straight pull bolt-action rifle, designed by Ferdinand Ritter von Mannlicher that used a refined version of his revolutionary straight-pull action bolt, much like the Mannlicher M1890 carbine. It was nicknamed the Ruck-Zuck-Gewehr by Austrian troops and "Ta-Pum" by Italian troops who even wrote a song about it during World War I.

The Gewehr 98 is a German bolt action rifle made by Mauser firing cartridges from a 5-round internal clip-loaded magazine. It was the German service rifle from 1898 to 1935, when it was replaced by the Karabiner 98k, a shorter weapon using the same basic design. The Gewehr 98 action, using a stripper clip loaded with the 7.92×57mm Mauser cartridge, successfully combined and improved several bolt action engineering concepts which were soon adopted by many other countries including the UK, Japan, and the US. The Gewehr 98 replaced the earlier Gewehr 1888 as the main German service rifle. It first saw combat in the Chinese Boxer Rebellion and was the main German infantry service rifle of World War I. The Gewehr 98 saw further military use by the Ottoman Empire and Nationalist Spain.

The Nagant M1895 Revolver is a seven-shot, gas-seal revolver designed and produced by Belgian industrialist Léon Nagant for the Russian Empire. 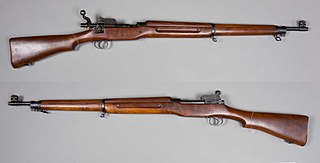 The M1917 Enfield, the "American Enfield", formally named "United States Rifle, cal .30, Model of 1917" is an American modification and production of the .303-inch Pattern 1914 Enfield (P14) rifle developed and manufactured during the period 1917–1918. Numerically, it was the main rifle used by the American Expeditionary Forces in Europe during World War I. The Danish Sirius Dog Sled Patrol on Greenland still use the M1917, which performs reliably in Arctic conditions, as their service weapon.

The Mauser Model 1871 adopted as the Gewehr 71 or Infanterie-Gewehr 71, or "Infantry Rifle 71" was the first rifle model in a distinguished line designed and manufactured by Paul Mauser and Wilhelm Mauser of the Mauser company and later mass-produced at Spandau arsenal.

The Beretta Stampede is a single-action revolver manufactured by Beretta that is an exact clone of the Colt Single Action Army "Peacemaker". 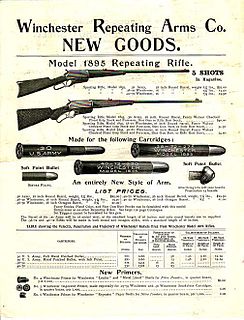 The Mauser Model 1893 is a bolt-action rifle commonly referred to as the Spanish Mauser, though the model was adopted by other countries in other calibers, most notably the Ottoman Empire. The M1893 was based on the experimental M1892 rifle, which Paul Mauser developed for the Spanish Army as part of a program to correct deficiencies in the earlier 1889, 1890, and 1891 series of Mauser rifles. The M1893 introduced a short staggered-column box magazine that fit flush with the bottom of the stock; the magazine held five smokeless 7×57mm Mauser rounds, which could be reloaded quickly by pushing a stripper clip from the top of the open bolt.

The Mauser Model 1889 was a bolt-action rifle of Belgian origin. It became known as the 1889 Belgian Mauser, 1891 Argentine Mauser, and 1890 Turkish Mauser.

The FN P-12 shotgun is a pump-action 12-gauge shotgun designed and manufactured by FN Herstal assembled in Portugal. The weapon, which was introduced during the summer of 2012, is intended to complement the FN SLP. 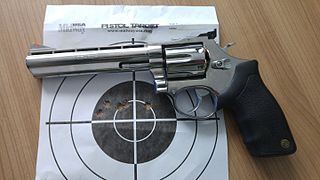 The Taurus Model 689 is a double action/single action .357 magnum revolver produced in Brazil by Taurus (manufacturer). The Taurus 689 was produced from 1988–1998. It is DA/SA action. The Taurus 669 model is essentially identical but has a non-vented barrel rib.

The Mauser Model 1904 and Model 1907 were Gewehr 98 pattern bolt-action battle rifles produced by Mauser and Deutsche Waffen und Munitionsfabriken (DWM). They were designed for export market. Copies were later produced in China and in Spain.

The Steyr Model 1912 were Gewehr 98 pattern bolt-action battle rifles produced by Steyr before World War I. They were designed for export market. During the war, they were also used by the Austro-Hungarian Army.