You have reached the cached page for https://scandal.fandom.com/wiki/Portia_de_Rossi
Below is a snapshot of the Web page as it appeared on 6/18/2021 (the last time our crawler visited it). This is the version of the page that was used for ranking your search results. The page may have changed since we last cached it. To see what might have changed (without the highlights), go to the current page.
You searched for: matthew del negro portia de rossi net worth We have highlighted matching words that appear in the page below.
Bing is not responsible for the content of this page.
Portia de Rossi | Scandal Wiki | Fandom

Portia Lee James DeGeneres (born Amanda Lee Rogers; January 31, 1973), also known professionally as Portia de Rossi, is an Australian and American actress, model, and philanthropist. She is known for her roles as lawyer Nelle Porter on the American television series Ally McBeal—for which she won a Screen Actors Guild Award in 1999—and as Lindsay Fünke on the American television sitcom Arrested Development. She also portrayed Veronica Palmer on the ABC television sitcom Better Off Ted, and Olivia Lord on the television drama Nip/Tuck. De Rossi is married to comedian and television host Ellen DeGeneres.

Portia de Rossi has had a widely varied career, captivating audiences in both television and film. In addition to starring as Elizabeth North on Scandal, De Rossi most recently starred in the return of the cult classic show, “Arrested Development,” which aired on Netflix in May 2013. She reprised her role as ‘Lindsay Bluth Funke’ in the critically acclaimed and Emmy Award-winning comedy. De Rossi released her memoir, Unbearable Lightness: A Story of Loss and Gain, in November 2010 with Atria Books. Her book debuted on the New York Times Bestseller List at No. 3 and was on the list for five weeks.

De Rossi previously starred on ABC’s comedy, “Better Off Ted” as ‘Veronica Palmer.’ She also previously starred as the enigmatic lawyer ‘Nelle Porter’ on FOX’s widely successful show, “Ally McBeal.” De Rossi also starred as a series regular in the fifth season of the popular FX original drama series “Nip/Tuck” as ‘Olivia Lord,’ a holistic medicine practitioner who has problematic relationships with both her girlfriend, Julia, and her out-of-control daughter. De Rossi received her first acting break in the feature film “Sirens,” starring opposite Hugh Grant, Sam Neil and Elle Macpherson, and went on to become an international and critical success.

De Rossi also co-starred alongside Richard Dreyfuss and Tim Allen in “Who Is Cletis Tout?,” as well as Dennis Hopper and Melanie Griffith in “The Night We Called It A Day.” Some of De Rossi’s other film credits Include “I Witness,” “Scream 2,” “Stigmata,” “Women In Film,” and “The Invisibles.” In 2002, she starred in the television movie “America’s Prince: The John F. Kennedy Jr.Story,” in which she portrayed Carolyn Bessette Kennedy.

Portia’s - Behind the Scenes Photos 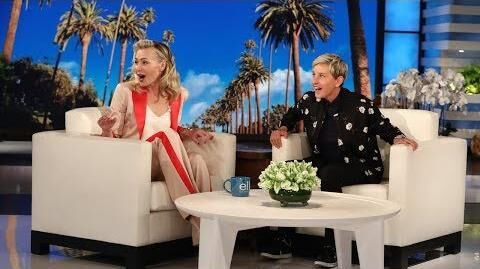 Click on any or all of the links below to view more information about Portia de Rossi and a full filmography.

Retrieved from "https://scandal.fandom.com/wiki/Portia_de_Rossi?oldid=71205"
Community content is available under CC-BY-SA unless otherwise noted.