You have reached the cached page for https://wikimili.com/en/Matt_Barrie_(sportscaster)
Below is a snapshot of the Web page as it appeared on 4/8/2020 (the last time our crawler visited it). This is the version of the page that was used for ranking your search results. The page may have changed since we last cached it. To see what might have changed (without the highlights), go to the current page.
You searched for: matt barrie (sportscaster) wikipedia page We have highlighted matching words that appear in the page below.
Bing is not responsible for the content of this page.
Matt Barrie (sportscaster) - WikiMili, The Free Encyclopedia

Matt Barrie (Scottsdale, Arizona) is a sportscaster for ESPN's SportsCenter . He joined the show in March 2013. [1] Prior to joining ESPN, Barrie covered high school sports for Dallas/Fort Worth station KXAS-TV. Barrie has also worked as a sports broadcaster on radio and television in Columbia, South Carolina. [2] 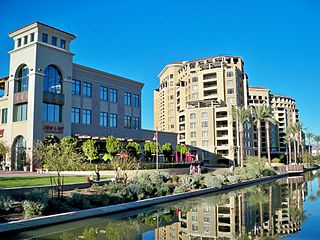 Scottsdale is a city in the eastern part of Maricopa County, Arizona, United States, part of the Greater Phoenix Area. Named Scottsdale in 1894 after its founder Winfield Scott, a retired U.S. Army chaplain, the city was incorporated in 1951 with a population of 2,000. The 2015 population of the city was estimated to be 236,839 according to the U.S. Census Bureau. The New York Times described downtown Scottsdale as "a desert version of Miami's South Beach" and as having "plenty of late night partying and a buzzing hotel scene." Its slogan is "The West's Most Western Town."

ESPN is a U.S.-based pay television sports channel owned by ESPN Inc., a joint venture owned by The Walt Disney Company (80%) and Hearst Communications (20%). The company was founded in 1979 by Bill Rasmussen along with his son Scott Rasmussen and Ed Egan.

SportsCenter (SC) is a daily sports news television program that serves as the flagship program of American cable and satellite television network ESPN. Originally broadcast only once per day, SportsCenter now has up to twelve airings each day; the program features highlights and updates, and reviews scores from the day's major sporting events, along with commentary, analysis previewing upcoming games, feature segments, and news stories from around the sports world.

Barrie is a graduate of the Walter Cronkite School of Journalism at Arizona State University. [2]

The Walter Cronkite School of Journalism and Mass Communication, is one of the 24 independent schools at Arizona State University and is named in honor of veteran broadcast journalist Walter Cronkite. The school, which is located at the downtown Phoenix campus, offers several undergraduate and graduate programs in journalism, and in fall 2011, launched its first doctoral program in journalism and mass communication. 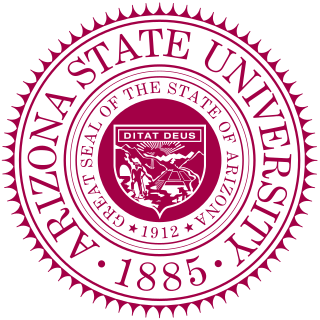 The Pac-12 Conference is a collegiate athletic conference that operates in the Western United States, participating in 24 sports at the NCAA Division I level. Its football teams compete in the Football Bowl Subdivision, the higher of two tiers of NCAA Division I football competition.

The Western Athletic Conference (WAC) is an American collegiate athletic conference formed on July 27, 1962 and affiliated with the National Collegiate Athletic Association (NCAA) Division I. The WAC covers a broad expanse of the western United States, with member institutions located in Arizona, California, New Mexico, Utah, and Washington, along with the "non-western" states of Missouri and Illinois, as well as Texas. 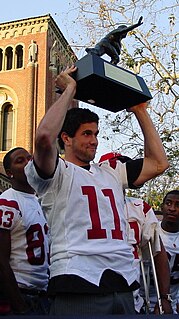 Matthew Stephen Leinart is a former American football quarterback who now works as a studio analyst for Fox Sports’ college football coverage. He played college football at the University of Southern California (USC) from 2001 to 2005. He was the starting quarterback for the Trojans in 2003, 2004, and 2005. As junior in 2004, he won the Heisman Trophy. Leinart played professionally in the National Football League (NFL) for the Arizona Cardinals (2006–2009), Houston Texans (2010–2011), Oakland Raiders (2012), and Buffalo Bills (2013). Leinart signed a deal with the Pac-12 Network, making his official debut as a Studio Analyst on August 30, 2014. He is a recurring guest, via voicemail, on the Barstool Sports podcast Pardon My Take. Leinart was inducted into the College Football Hall of Fame on December 5, 2017.

Luke Theodore Walton is an American professional basketball coach and former player who is the head coach of the Sacramento Kings of the National Basketball Association (NBA). He played 10 seasons in the NBA as a forward, winning two NBA championships with the Los Angeles Lakers. He also won a title as an assistant coach with the Golden State Warriors, and was the head coach for the Lakers from 2016 through 2019.

Richard Sean Salisbury is an American football analyst, former NFL and CFL quarterback, and actor. He is currently the host of The Sean Salisbury Show on SB Nation Radio. 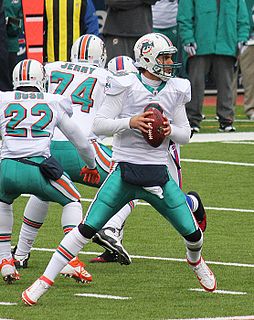 Matthew Erickson Moore is a former American football quarterback. He was signed by the Dallas Cowboys as an undrafted free agent in 2007, and has also played for the Carolina Panthers and Miami Dolphins. He played college football at UCLA and Oregon State.

Matthew Montgomery Barkley is an American football quarterback for the Buffalo Bills of the National Football League (NFL). He played college football at Southern California, and was drafted by the Philadelphia Eagles in the fourth round of the 2013 NFL Draft. He has also played for the Chicago Bears, Arizona Cardinals, San Francisco 49ers and Cincinnati Bengals.

Matthew Francis Kalil is an American football offensive tackle for the Houston Texans of the National Football League (NFL). He played college football at USC, and was drafted by the Minnesota Vikings fourth overall in the 2012 NFL Draft.

Patrick De'mon Peterson Jr. is an American football cornerback for the Arizona Cardinals of the National Football League (NFL). He played college football at Louisiana State University (LSU), where he won the Chuck Bednarik Award as the best defensive player in the country, the Jim Thorpe Award as the best defensive back, and was unanimously recognized as an All-American. He was selected fifth overall by the Cardinals in the first round of the 2011 NFL Draft. Peterson has been invited to the Pro Bowl in each of his first eight seasons in the NFL.

Tyrann Devine Mathieu is an American football safety for the Kansas City Chiefs of the National Football League (NFL). He played college football for Louisiana State University (LSU). In college he developed a reputation for causing turnovers, setting a Southeastern Conference (SEC) record with 11 career forced fumbles and earning the nickname "Honey Badger". In his sophomore season, he was recognized as a consensus All-American, won the Chuck Bednarik Award as the best defensive player in college football, and was a finalist for the Heisman Trophy. Mathieu was dismissed from the LSU football program after that season due to a violation of team rules.

Andrew Christian Wiggins is a Canadian professional basketball player for the Minnesota Timberwolves of the National Basketball Association (NBA). He played college basketball for the Kansas Jayhawks before being drafted with the first overall pick in the 2014 NBA draft by the Cleveland Cavaliers, making him just the second Canadian to be taken number one overall in the NBA draft. He went on to earn NBA Rookie of the Year honours for the 2014–15 season. Wiggins is also a member of the Canadian national team.

The 2013 Major League Baseball season started on March 31 with a Sunday night game between the Texas Rangers and the Houston Astros. Opening Day for most clubs was a day later on April 1. The regular season ended on September 30, extended one day for a one-game playoff between the Tampa Bay Rays and the Texas Rangers to decide the second American League Wild Card winner.

William Sutton is an American football defensive tackle for the Arizona Hotshots of the Alliance of American Football (AAF). He was drafted by the Chicago Bears in the third round of the 2014 NFL Draft. He played college football at Arizona State. 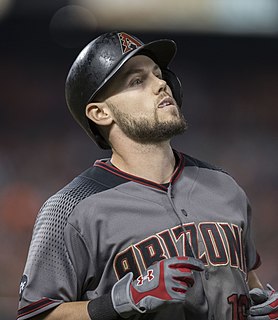 Christopher Scott Owings is an American professional baseball utility player for the Kansas City Royals of Major League Baseball (MLB). He previously played in MLB for the Arizona Diamondbacks. He has played shortstop, second base, and center field.

Matthew Lee Andriese is an American professional baseball pitcher for the Arizona Diamondbacks of Major League Baseball (MLB). He previously played for the Tampa Bay Rays.

Rondae Jaquan Hollis-Jefferson is an American professional basketball player for the Brooklyn Nets of the National Basketball Association (NBA). He played college basketball for the Arizona Wildcats team from 2013 to 2015.

Kyle Allen is an American football quarterback for the Carolina Panthers of the National Football League (NFL). He played college football for the Texas A&M Aggies and Houston Cougars.

Deandre Edoneille Ayton is a Bahamian professional basketball player for the Phoenix Suns of the National Basketball Association (NBA). He played for the Arizona Wildcats in the Pac-12 Conference in the 2017–18 season and was a consensus five-star prospect in the Class of 2017, as well as a McDonald's All-American. Ayton was selected with the first overall pick in the 2018 NBA draft by the Suns.

Matthew Haack is an American football punter for the Miami Dolphins of the National Football League (NFL). He played college football at Arizona State. He writes, bats, and throws with his right hand but kicks left footed and has his whole life.