You have reached the cached page for https://wikimili.com/en/Mark_Canton
Below is a snapshot of the Web page as it appeared on 12/24/2020 (the last time our crawler visited it). This is the version of the page that was used for ranking your search results. The page may have changed since we last cached it. To see what might have changed (without the highlights), go to the current page.
You searched for: mark canton wikipedia death certificate 2017 form We have highlighted matching words that appear in the page below.
Bing is not responsible for the content of this page.
Mark Canton - WikiMili, The Best Wikipedia Reader

Canton was born to a Jewish family [1] in Queens, New York, the son of Shirley and Arthur Canton, who worked in the film industry on marketing and publicity - including such films as Lawrence of Arabia . As a young adult, he met well known movie personalities like Alfred Hitchcock, David Lean, and Doris Day when they visited the family's apartment. [2] After working in the mail room of Warner Bros. while studying at the University of California, Los Angeles, [3] Canton started working for 20th Century Fox and later had jobs with film director Franklin Schaffner, with producer Jon Peters, and in the 1970s as executive assistant to Mike Medavoy at United Artists, [2] before working as executive vice president at Warner Bros. from 1980 onwards. Successes he was involved in at the time include 1983's National Lampoon's Vacation , Purple Rain , and the Batman and Lethal Weapon film series, [4] but also notorious box office failures like The Bonfire of the Vanities (1990), [5] a picture he described as "the best movie I ever saw" at its first screening. [6]

In 1991, Canton quit Warner Bros. where he was executive vice president of the Worldwide Motion Picture Production unit. [7] Warner Bros. let him out of his contract fifteen months early with studio head Bob Daly saying "from our standpoint this was a job that was going to be eliminated." [8] He then became chairman of Sony's Columbia Pictures (later Columbia-TriStar Pictures), where he was involved with some failures like Geronimo: An American Legend , but also with blockbusters such as Men in Black , Air Force One , and My Best Friend's Wedding . [4]

Canton was fired by Sony in 1996, after a series of relative flops including Last Action Hero (a film Canton described as "probably the best action movie of all time" [9] ) and The Cable Guy , before his final string of movies could become blockbusters. [10] Described at the time as both "known for enthusiasm, rapid-fire talk, a sleek Italian wardrobe and a youthful style" [3] and "a braggart who was lucky to have become chairman of a studio in the first place", [11] Canton was in those years "one of the most powerful executives in Hollywood". [2]

In 1998, Canton became an independent film producer, with Jack Frost starring Michael Keaton as his first major production. [12] Backed by the German company Senator Entertainment from August 2000 onwards, he struck a first-look deal with Warner Bros. By the end of 2001, the shares of Senator had dropped substantially and Canton had to close down his production company. [13]

In 2002, he was the chief executive of Artists Production Group, the movie branch of Artist Management Group. [4] After leaving APG in November 2003, he created Atmosphere Entertainment together with Mark Kimsey, an investment manager. The aims were to produce films and television programming. [14] With this company, he produced blockbusters such as 300 , Immortals , and The Spiderwick Chronicles . In his roles as executive, chairman, and producer, Canton has been involved in over 300 major Hollywood productions. [15]

Canton was married to Oscar-winning producer Wendy Finerman, with whom he has three children. [2] His brother is the film producer Neil Canton. [2] They co-produced the 2000 film Get Carter .

Barry Sonnenfeld is an American filmmaker and television director. He originally worked as a cinematographer for the Coen brothers before directing films such as The Addams Family (1991) and its sequel Addams Family Values (1993) alongside the Men in Black trilogy (1997–2012), Wild Wild West (1999) and Get Shorty (1995). Sonnenfeld has collaborated with actor and rapper Will Smith four times. 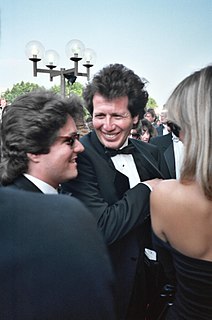 Brad Alan Grey was an American television and film producer. He co-founded the Brillstein-Grey Entertainment agency, and afterwards became the chairman and CEO of Paramount Pictures, a position he held from 2005 until 2017. Grey graduated from the State University of New York at Buffalo School of Management. Under Grey's leadership, Paramount finished No. 1 in global market share in 2011 and No. 2 domestically in 2008, 2009, and 2010, despite releasing significantly fewer films than its competitors. He also produced eight out of Paramount's 10 top-grossing pictures of all time after having succeeded Sherry Lansing in 2005.

Legendary Pictures Productions, LLC, doing business as Legendary Entertainment or simply Legendary, is a Chinese owned American film production and mass media company based in Burbank, California. The company was founded by Thomas Tull in 2000 and in 2005 concluded an agreement to co-produce and co-finance films with Warner Bros. and Universal Pictures. Since 2016, Legendary has been a subsidiary of the Chinese conglomerate Wanda Group.

The fictional superhero Batman, who appears in American comic books published by DC Comics, has appeared in various films since his inception. Created by Bob Kane and Bill Finger, the character first starred in two serial films in the 1940s: Batman and Batman and Robin. The character also appeared in the 1966 film Batman, which was a feature film adaptation of the 1960s Batman TV series starring Adam West and Burt Ward, who also starred in the film. Toward the end of the 1980s, the Warner Bros. studio began producing a series of feature films starring Batman, beginning with the 1989 film Batman, directed by Tim Burton and starring Michael Keaton. Burton and Keaton returned for the 1992 sequel Batman Returns, and in 1995, Joel Schumacher directed Batman Forever with Val Kilmer as Batman. Schumacher also directed the 1997 sequel Batman & Robin, which starred George Clooney. Batman Forever and Batman & Robin were poorly received by both critics and fans, leading to the cancellation of Batman Unchained.

Barbie, a fashion doll manufactured by the American toy company Mattel, Inc., has been a computer animated virtual actress starring in direct-to-video animated films. Although Barbie has appeared in miniseries and short films since 1987, the series officially began in 2001 with Barbie in the Nutcracker. It was followed by a total of thirty-five films before it was put on hiatus in 2017. Barbie has appeared as a character in other films, including Mattel's My Scene line as well as the Toy Story film series, but these are not considered part of the franchise. Created by Mattel Creations, the first ten films sold 40 million DVD and VHS units worldwide by 2007, grossing over $700 million in sales. As of 2013, the series has sold over 110 million DVD units worldwide. 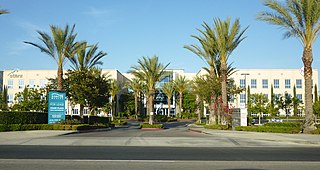 Hasbro Studios, LLC, d/b/a Allspark, was an American production and distribution company located in Burbank, California. It was a wholly owned subsidiary of the American toy and multimedia company Hasbro. Originally just a TV production division, many of its TV shows were based on Hasbro properties and were broadcast on multiple media platforms, including Discovery Family, a joint venture between Hasbro and Discovery, Inc.

Nathan Kahane is co-founder of Good Universe, an independent full-service motion picture financing company. Kahane has served as an executive producer on more than 30 films in his career and oversees the development and production of the company's growing feature slate.

Justice League is a 2017 American superhero film based on the DC Comics superhero team of the same name. It is the fifth installment in the DC Extended Universe and a follow-up to Batman v Superman: Dawn of Justice, and was directed by Zack Snyder and written by Chris Terrio and Joss Whedon who served as co-director, based on a story by Terrio and Snyder. It features an ensemble cast that includes Ben Affleck, Henry Cavill, Gal Gadot, Ezra Miller, Jason Momoa, Ray Fisher, Amy Adams, Jeremy Irons, Diane Lane, Connie Nielsen, and J. K. Simmons. In the film, Batman and Wonder Woman recruit The Flash, Aquaman, and Cyborg after Superman's death to save the world from the catastrophic threat of Steppenwolf and his army of Parademons.

DC Films is an American film studio that is a subsidiary of Warner Bros. through the Warner Bros. Pictures Group, dedicated to the production of films based on characters from DC Entertainment. Walter Hamada is the current president of DC Films.

Andrés Muschietti is an Argentine filmmaker who achieved wide recognition with the 2013 film Mama which he made with Neil Cross and his sister, producer and screenwriter Barbara Muschietti, based on the three-minute film of the same name. This film, which he made at age 39, had attracted the attention of Guillermo del Toro, who then served as executive producer.

John Powers Middleton is an American film and television producer. He began his film career as an executive producer for Oldboy (2013) before executive producing the A&E television series, Bates Motel (2013), and co-producing The Lego Movie (2014). Middleton's production company, The Affleck/Middleton Project, produced the film Manchester by the Sea (2016), which was nominated for six Oscars, including Best Picture. The film won Oscars for Best Original Screenplay and Best Actor. He was an executive producer on The Disaster Artist (2017), which was nominated for one Oscar and two Golden Globes, including Best Picture in a Musical or Comedy. The film won for Best Actor. Middleton's 2017 films grossed over $500 million and garnered over 130 award nominations.

Ethan Reiff and Cyrus Voris are American screenwriters and producers. They are known for their work in both feature films and television.

Warner Bros. Pictures is an American film production and distribution studio owned by the WarnerMedia Studios & Networks Group. Headquartered at the Warner Bros. Studios complex in Burbank, California, it is the flagship label of the Warner Bros. Pictures Group division of Warner Bros. Entertainment, itself a division of AT&T's WarnerMedia. Founded in 1923 by Harry Warner, Albert Warner, Sam Warner, and Jack L. Warner, in addition to producing its own films, it handles filmmaking operations, theatrical distribution, marketing and promotion for films produced and released by other Warner Bros. labels, including Warner Bros. Animation, Warner Animation Group, New Line Cinema, DC Films, and Castle Rock Entertainment, as well as various third-party producers.