You have reached the cached page for https://bloody-disgusting.com/podcasts/3668727/excisions-pauline-queer-icon-horror-queers-podcast/
Below is a snapshot of the Web page as it appeared on 7/29/2021 (the last time our crawler visited it). This is the version of the page that was used for ranking your search results. The page may have changed since we last cached it. To see what might have changed (without the highlights), go to the current page.
You searched for: margaret movie reviews rotten tomatoes avatar We have highlighted matching words that appear in the page below.
Bing is not responsible for the content of this page.
'Excision': Why AnnaLynne McCord's Pauline Is a Queer Icon [Horror Queers Podcast] - Bloody Disgusting

If June is Pride Month, what better way to celebrate than with some unabashedly queer texts? Last week we delved into British allegory The Wolves of Kromer and this week we’re checking out Richard Bates Jr‘s nasty horror-comedy Excision, which has an all-star cast and a very unconventional protagonist in AnnaLynne McCord‘s Pauline.

In the film, Pauline is an antagonistic suburban teen with an exceptionally gory and fantastical dream-life. In real life, she regularly butts heads with her conservative mother (Traci Lords) while her passive father (Roger Bart) and sick younger sister (Ariel Winter) look on. As Pauline’s aggressive behaviour lands her in more hot water, she decides that she’s the only one who can help her sister as her Cystic Fibrosis worsens, leading to a stunning and emotionally wrought conclusion.

Be sure to subscribe to the podcast to get a new episode every Wednesday. You can subscribe on iTunes/Apple Podcasts, Stitcher, Spotify, iHeartRadio, SoundCloud, TuneIn, Amazon Music, Acast, Google Podcasts, and RSS.

Prep your dream fantasies and your give no fuck attitude because we’re checking out Richard Bates Jr’s Excision (2012). Joining us to talk about Traci Lords and AnnaLynne McCord’s powerhouse performances is Transploitation author and Sick Sad Monsters co-host Wren Crain, who contributes a candid and personal reading about mental illness in the film. CW: Necrophilia, Abortion.

Up for discussion: why McCord’s Pauline is a queer icon, the film’s rude and crude comedy (hint: it’s tied to abjection!), and age-appropriate crushes on Jeremy Sumpter.

Plus: comparisons to May and Ginger Snaps, tangents about Gilmore Girls AND Monster-In-Law (?!), another sexually charged locker room scene and *a lot* of feelings about the ending.

P.S. Subscribe to our Patreon for tons of additional content! For June, we’re tackling The Conjuring universe with a minisode ranking of all of the films, an audio commentary on James Wan’s franchise starter The Conjuring, plus a full-length episode on the latest The Devil Made Me Do It. Plus: a minisode Summer horror movie preview and a full-length episode on the new Pierce Brosnan/Ilana Glazer pregnancy film False Positive.

Joe is a TV addict with a background in Film Studies. He co-created TV/Film Fest blog QueerHorrorMovies and writes for Bloody Disgusting, Anatomy of a Scream, That Shelf, The Spool and Grim Magazine. He enjoys graphic novels, dark beer and plays multiple sports (adequately, never exceptionally). While he loves all horror, if given a choice, Joe always opts for slashers and creature features.

Before ‘Scream 2’, ‘Demons’ Got Meta in the Aisles [Halloweenies Podcast] 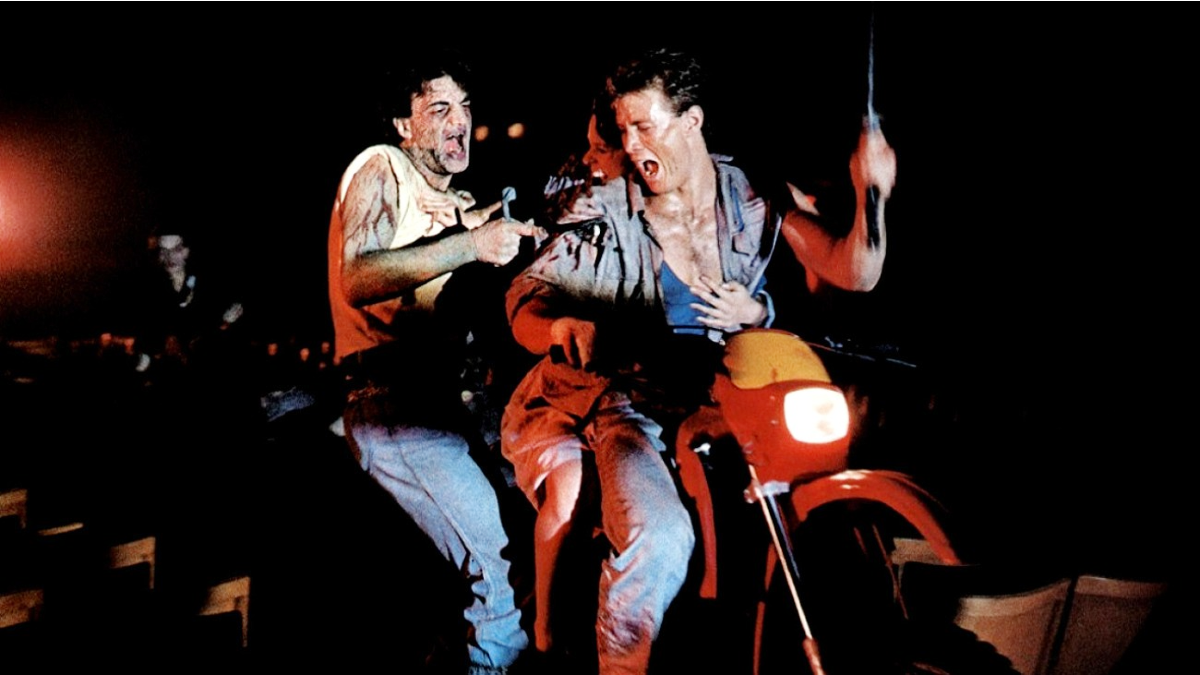 Before the Halloweenies head to Hollywood in August for Scream 3, they have some film courses to complete this summer at Windsor College. In June, they visited Mark Rosman’s 1982 American slasher The House on Sorority Row. For July, they’re conjuring Demons.

For the latest installment of this season’s Randy’s Recs, which finds the Halloweenies dissecting a film that inspired the Scream franchise, the gang leaves little blood on the floor. Like the best students, they cross their t’s and dot their i’s as they hit the proverbial books.

Together, they discuss the differences between Bava and producer Dario Argento’s style, the complicated history behind the “sequels” of Demons, Stivaletti’s outstanding practical effects, the shocking mid-credits ending, and Cluadio Simonetti’s top-tier score.

So, drop that popcorn, hop on this display motorbike, and join the gang now via iTunes/Apple Podcasts, Stitcher, Spotify, RadioPublic, Acast, Google Podcasts, and RSS.

New to the Halloweenies? Catch up with the gang by revisiting their essential episodes on past franchises such as Halloween, A Nightmare on Elm Street, and Friday the 13th. You can also become a member of their Patreon for hilarious commentaries and one-off episodes.

‘Skull’ Is an Origin Story About the First Time a Predator Comes to Earth; Filming Almost Completed!

‘The Exorcist’: David Gordon Green Confirms That His New Movie Will Be a Sequel to the Original