You have reached the cached page for https://www.rottentomatoes.com/m/margaret_2010
Below is a snapshot of the Web page as it appeared on 6/11/2021 (the last time our crawler visited it). This is the version of the page that was used for ranking your search results. The page may have changed since we last cached it. To see what might have changed (without the highlights), go to the current page.
You searched for: margaret movie reviews parasite 2017 We have highlighted matching words that appear in the page below.
Bing is not responsible for the content of this page.
Margaret (2011) - Rotten Tomatoes
Home
Top Box Office
Tickets & Showtimes
DVD & Streaming
TV
News 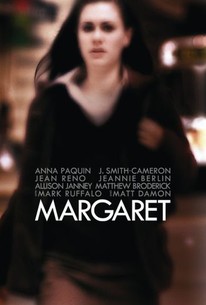 A surfeit of ideas contributes to Margaret's excessive run time, but Anna Paquin does a admirable job of guiding viewers through emotional hell. Read critic reviews

New York high-school student Lisa Cohen (Anna Paquin) inadvertently causes an accident in which a bus driver (Mark Ruffalo) runs over a pedestrian (Allison Janney). Guilt-stricken over her role in the woman's death, Lisa's mood swings from normal to furious, with her angry outbursts mostly directed at her mother (J. Smith-Cameron). Lisa reaches out to the dead woman's best friend (Jeannie Berlin) and the bus driver, but her failed efforts to make amends only lead to more hostility.