You have reached the cached page for https://www.amazon.com/Night-Munich-Criterion-Collection-Blu-ray/dp/B01H66WATY
Below is a snapshot of the Web page as it appeared on 1/27/2021 (the last time our crawler visited it). This is the version of the page that was used for ranking your search results. The page may have changed since we last cached it. To see what might have changed (without the highlights), go to the current page.
You searched for: margaret movie reviews parasite We have highlighted matching words that appear in the page below.
Bing is not responsible for the content of this page.
Amazon.com: Night Train to Munich (The Criterion Collection) [Blu-ray]: Rex Harrison, Margaret Lockwood, Paul Henreid, Carol Reed: Movies & TV 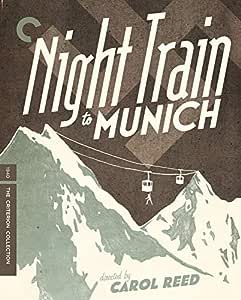 Night Train to Munich, from writers Frank Launder and Sidney Gilliat (Hitchcock s The Lady Vanishes) and director Carol Reed (The Fallen Idol, The Third Man), is a twisting, turning, cloak-and-dagger delight. Paced like an out-of-control locomotive, this gripping, occasionally comic confection takes viewers on a World War II era journey from Prague to England to the Swiss Alps, as Nazis pursue a Czech scientist and his daughter (Margaret Lockwood, of The Lady Vanishes), who are being aided by a debonair British undercover agent, played by Rex Harrison (Major Barbara, My Fair Lady). This captivating adventure which also features Casablanca s Paul Henreid mixes comedy, romance, and thrills with enough skill and cleverness to give the Master of Suspense himself pause.

BLU-RAY SPECIAL EDITION FEATURES
- Restored high-definition digital transfer, with uncompressed monaural soundtrack
- Conversation from 2010 between film scholars Peter Evans and Bruce Babington about director Carol Reed, screenwriters Frank Launder and Sidney Gilliat, and the social and political climate in which Night Train to Munich was made
- PLUS: An essay by film critic Philip Kemp

4.6 out of 5 stars
4.6 out of 5
153 global ratings
How are ratings calculated?
To calculate the overall star rating and percentage breakdown by star, we don’t use a simple average. Instead, our system considers things like how recent a review is and if the reviewer bought the item on Amazon. It also analyzes reviews to verify trustworthiness.
Top reviews

Swissangel
4.0 out of 5 stars Charismatic Paul Henreid in the Night Train to Munich
Reviewed in the United States on June 20, 2017
Verified Purchase
BLURAY CODE: A (= USA)
to Play in the german speaking and european-part you need a codefree bluray-player.
LANGUAGE: ENGLISH
SUBITLES: ENGLISH SDH

Never seen before this black/White war-movie - well... no surprise.. it's never been released in the german speaking part. Been bit dissapointed because I thought the whole movie is located/played in that one "Train to Munich" but at all it's a entertaining and thrilling movie. Paul Henreid (=Paul von Hernreid) is simply hot and charismatic looking and a great actor (and the reason to buy this blu ray).

The Picture Quality: Clean, sharp with fine Details. It could have been a little bit better and it would have been perfect. But at all... it's good without any dirt, scratches, damages.

The Bonus-Features (only a 29 min conversation about the movie's director) is good but have expected a little bit more.

R. L WrightTop Contributor: Classic Movies
5.0 out of 5 stars Classic war film, don't miss this one !!
Reviewed in the United States on September 10, 2017
Verified Purchase
One of my favorite war films. I first saw this classic many years ago on late night television, but it was simply called "Night Train". It was one of the early films of British favorite, Margaret Lockwood. She was clearly the most famous and favorite actress of the 40s and she made many memorable films, including my favorite, the 1944 production of "Love Story" AKA known as "A Woman Surrenders". NTTM had many twists and surprises that I am not going to repeat as spoilers, but the film was a lot of fun to watch. I was so glad to add this DVD to my ongoing collection of early and obscure British films.
Read more
4 people found this helpful
Helpful
Report abuse

Fort Knox
5.0 out of 5 stars Classic WWII caper
Reviewed in the United States on September 21, 2017
Verified Purchase
The comparisons to The Lady Vanishes have been blown out of proportion. Night Train to Munich is way better and way cooler. Aside from a couple familiar faces and some scenes on a train there is no comparison for me. If you like spy thrillers such as From Russia with Love and Where Eagles Dare, be sure to give Night Train a shot.

Paul Henreid is one of the best parts of this film and his organized escape is brilliant. At first I thought, "Oh great, another noble anti-Nazi hero. *yawn*" and then was surprised by the excellent twist that he actually is a Nazi spy. His dejected look at the end is priceless.

Rex Harrison is adequate, but doesn't come off as likable or believable as Henreid. It was confusing that his character was initially named Gus and then the British couple on the train recognizes him as "Dicky Randall." The first time I watched the film, I was like, "Wait...who is Dicky Randall??"

A couple other things that weaken the film for me are the fact that the British couple does not show any remorse or even realize that they totally blew his cover as a spy. Nor does Randall seem cross with them about it. Also, how did these two buffoons overpower two armed SS guards on the train?

Molly
4.0 out of 5 stars Escape from the Nazis~ on a train~ 4 STARS~
Reviewed in the United States on February 9, 2015
Verified Purchase
PLOT: Czech scientist and his daughter try and escape Nazi Germany.

The Nazis invade Czechoslovakia and a scientist escapes to England. His daughter (MARGARET LOCKWOOD) is captured and moved to a concentration camp. a STAGED escape complete with PAUL HEINREID~ has Lockwood back in England looking for her father who is hiding. She ends at the shore where a SINGER who cannot sing...LOL...REX HARRISON is helping hide her father. But the Nazis kidnap both father and daughter and take them back to Germany on a submarine. HARRISON goes to Germany and becomes a Nazi Army Officer using his cover to help them escape. The "NIGHT TRAIN TO MUNICH" is the place where the escape attempt will start. Two British men who are pacifists get drug into help the escape. The plot is a bit thin but lots of British Humor here. From the LOUSY singing of Harrison to the Mein Kampe book used as a very good prop. This was set just before the outbreak of World War 2. Harrison is both vein and funny as the clever under cover spy for England.
4 STARS~ this edition has been restored and is a visual delight.
Read more
12 people found this helpful
Helpful
Report abuse

Dave Freels
1.0 out of 5 stars Fuzzy Grainy Print
Reviewed in the United States on April 24, 2019
Verified Purchase
The movie is a classic WW2 story made during the war. The appearance of Charter's and Caldicott, the cricket crazy train passengers from The Lady Vanishes, is what caused me to purchase. My review on the story would be 4 stars. My review of this dvd is another story. The Artiflix dvd is priced at a dollar less than the Criterion version sold through Wal-Mart, and I wish I had purchased it there. It's a great movie but this print by Artiflix looks like it was recorded off of television. Fuzzy, grainy, though the sound is clear. I'm only 15 minutes into it so I don't know what else may occur, but this one is going back.
Read more
One person found this helpful
Helpful
Report abuse
See all reviews

M. J. A. Brough
4.0 out of 5 stars Cracking wartime train adventure
Reviewed in the United Kingdom on April 22, 2016
Verified Purchase
Rex Harrison's chiselled profile cuts its way insolently through 90 minutes of homely espionage, as he rescues Margaret Lockwood and her boffin 'father' from evil Nazi fanatic Paul Henreid. Plenty of atmosphere and railway smoke, culminating in an alpine stand-off. Basil Radford and Naunton Wayne bat and bowl their way to the pavilion with distinction (as in "The Lady Vanishes") and will be mentioned in despatches. A young-looking Raymond Huntley manages a rather entertaining cameo as a cynical German office functionary ("It's not a fine country; it's a bloody awful country..").

A. W. Wilson
5.0 out of 5 stars NIGHT TRAIN....from CRITERION DVD
Reviewed in the United Kingdom on March 9, 2016
Verified Purchase
This review is for the CRITERION DVD. An excellent transfer, 4.3 ratio, good clear picture and dialogue (but as "Film Fan" says, there is music that does require the remote, but it isn't too frequent.) Good action, good cast (Lockwood is excellent), direction, thrills and comedy (and Irene Handl). A classic, and this is a must have version. Good booklet accompanies the DVD plus a conversation about the film and Carol Reed. Highly recomended
Read more
4 people found this helpful
Report abuse

nelson allen
5.0 out of 5 stars Night Train to Munich
Reviewed in the United Kingdom on May 20, 2014
Verified Purchase
An excellently cast and directed film by Carol Reed; nine years before his 'The Third Man' film. I agree with the supposition that had Alfred Hitchcock still been directing in Britain at this time; it would have been one his films. Reed did an excellent job, directing with a surety worthy of the master. Reed cleverly employs Basil Radford and Naunton Wayne along with Margret Lockwood, all from 'The Lady Vanishes' cast in this delightful romp commencing with the Nazi's occupation of Czech O Slavkia, an event that prefigures the commencement of WW2. This exciting chase/espionage film rattles along at a good pace that along with its many adventures catapults the drama into the commencement of WW2.
An excellent film for those interested in the events and concerns of many that led up to the last great global conflict, along with skillfully placed comic moments. All worthy of A. H.
Read more
2 people found this helpful
Report abuse

V.Jonathan Hartfield
4.0 out of 5 stars An unexpected Carol Reed Success
Reviewed in the United Kingdom on August 11, 2013
Verified Purchase
A comedy thriller with Nazi spies one needs to get into the classic cinema pace, which is slow by present standards. Produced soon after Hitchcocks 'The lady vanishes'it shares some characters and of course a train. Night Train does not have the polish of Hitchcock but has a good story, some classy direction and acting, and is interesting as a run up to some very great films by Carol Reed.
Read more
One person found this helpful
Report abuse