You have reached the cached page for https://archive.org/details/the-compleat-mae-brussell
Below is a snapshot of the Web page as it appeared on 5/14/2021 (the last time our crawler visited it). This is the version of the page that was used for ranking your search results. The page may have changed since we last cached it. To see what might have changed (without the highlights), go to the current page.
You searched for: mae brussell wikipedia encyclopedia britannica 2017 We have highlighted matching words that appear in the page below.
Bing is not responsible for the content of this page.
The Compleat Mae Brussell : Mae Brussell : Free Download, Borrow, and Streaming : Internet Archive Skip to main content

See what's new with book lending at the Internet Archive 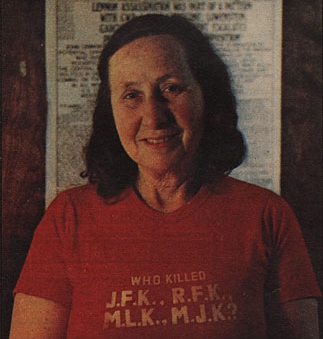 Flag this item for

~ Please Note : This is a 32GB archive in the process of being organized and uploaded. It will take some time to fully complete. An update of Tim Canale's episode guide is also forthcoming. ~
"Dialogue: Conspiracy is a program which shares the political research of Mae Brussell. Her almost ten years of work are based on the theory that government is moved as much or more by conspiracy than by any democratic process."
— KLRB, June 1972

This is a collection of Mae Brussell's recordings from 1971 to 1988. The archive begins in June 1971, a month after Mae began her radio career as a frequent guest on KLRB's Dialogue, which expanded into KLRB's regular segment Dialogue: Assassination and from there into Dialogue: Conspiracy and World Watchers International.

While a few of Mae's recordings have been lost, this collection [when completed will be] a comprehensive source of her surviving broadcast material. For supplemental interviews and lectures, [click here].

Any overview of American journalism during the 1970s which excludes Mae is incomplete. She is unambiguously the mother of all contemporary conspiracy theory, through both her dedicated research into both the assassination of John F. Kennedy which brought her into collaboration with New Orleans District Attorney Jim Garrison, as well her pursuance of the inscrutable tales of the Gemstone File. She taught an accredited course on political conspiracy at Monterey Peninsula College in the 1970s.

While Mae brought to the studio desk her own particular fixations (depopulation, dune buggies) the depth and breadth of her research is extraordinary, as is how much she wound up getting right; for example, her discussions of CIA chemical interrogation and behavioral research as early as 1972 - three years before this information was made public.

On May 29th 1968, Mae confronted Rose Kennedy at the Monterey Peninsula Airport, handing her a note that Robert Kennedy would be assassinated. He was shot to death at The Ambassador Hotel in Los Angeles a week later.
On March 29th 1981, Mae predicted on-air that Ronald Reagan would be assassinated, and that the perpetrator would likely originate within circles around George H.W. Bush. The very next day, Reagan was shot by John Hinckley Jr. - who had been arrested a year earlier carrying three guns inside Nashville Airport on the day President Jimmy Carter arrived in the city, a crime for which he was released without being charged or even fingerprinted. He is the son of John Hinckley Sr. (President of Vanderbilt Energy and World Vision U.S.) and he was released from a federal psychiatric facility in 2016 with his records sealed by the FBI. The Hinckleys underwrote George W. Bush's failed congressional campaign of 1978. The Midland, Texas oil families go back a long time.

What Warren Hinckle called 'The Brussell Thesis' — "That an ex-Nazi scientist-Old Boy OSS clique in the CIA using Mafia hit men changed the course of American history by bumping off one and all, high and low, who became an irritant to them" — was considered as a fringe theory in the 1970s before its' fundaments were vindicated by the research of a generation of "Brussell Sprouts" during the 1980s & 1990s.

Before her passing in October of 1988, Mae requested that a public anti-fascist research library be set up in her name in Santa Cruz, California. Digitization of her paper archive was estimated to cost $150,000 in 1989. The money never materialized, and rivalries surrounding the archive eventually removed it from public access completely.

Thanks to Tim Canale for providing access to Mae's recordings and supplementary material, to Dave Ratcliffe for his preservation of World Watchers International's bibliographies, and to Paul Krassner for additional guidance.

"I see pockets of fascism ... The Rockefellers' attorney, Allen Dulles, consulted with Reinhard Gehlen, the Nazi intelligence chief, to form our own CIA. George Ball writes about getting rid of people by the millions. Patrick Buchanan writes an article justifying the use of torture. Zbigniew Brzezinski, head of our National Security Council, writes that 'with the use of computers, human behavior itself will become more determined and subject to deliberate programming,' and that 'it will soon be possible to assert almost continuous surveillance over every citizen' ... It's not my whole life. It's important to find out who killed Kennedy, but not at the expense of your own humanness. I don't lose anything if they never find out who killed him. I still have my self-respect. And I like having children and preparing meals and mastering everything having to do with the home. In fact, my initial concern over who killed John Kennedy was basically a selfish one. I wanted to find out if there had been a coup, if the United States was going fascist. Would I be like Anne Frank's father, who told his family that things were OK and that people were basically good - while they were living their last days? They never fought Nazism, but just watched it all go by and hid in the attic until their time came around to be taken away. With a family of five children, my husband and myself, I had an obligation to understand the world outside my home. When Hitler failed, his officers were brought to the U.S. from inside Rockefeller Center, and to the Bahamas and Southern states to build this dream of the Fourth Reich. It is in this context that the Kennedys, Malcolm X, Martin Luther King, labor leaders, judges, entertainers, reporters, authors, students, Black Panthers, Indians, Chicanos, and hippies are being slain, and why the masses are being doped into control."
— Mae Brussell

"BRUSSELL is known to various police agencies on the Monterey Peninsula as a chronic complainer."
— FBI San Francisco Field Office

"If something happens to me, we'll know it wasn't an accident."
— John Lennon, 1972, on underwriting Mae's exposé of the Watergate Affair in The Realist

Reviewer: FreeGranny1776 - favoritefavoritefavoritefavoritefavorite - April 11, 2021
Subject: Mae Brussell was right
I was in 3rd grade when JFK was assassinated. High school during Watergate. I remember the RFK, King killings and Sharon Tate. The Wallace shooting and the riots of the 60s. Listening to Mae from 50 years ago all these events and names I remember. 911 ushered in a surveillance fascist state that exists today. In 2020 we have a corrupted FBI, corrupted justice dept, corrupted Supreme Court and a stolen Presidency. High tech and MSM control and free speech Nazis. Anyone who values freedom would be wise to listen to Mae Brussel's recordings. They are a God send.

SIMILAR ITEMS (based on metadata)