You have reached the cached page for https://www.rottentomatoes.com/m/machete_kills
Below is a snapshot of the Web page as it appeared on 1/16/2021 (the last time our crawler visited it). This is the version of the page that was used for ranking your search results. The page may have changed since we last cached it. To see what might have changed (without the highlights), go to the current page.
You searched for: machete kills movie trailer We have highlighted matching words that appear in the page below.
Bing is not responsible for the content of this page.
Machete Kills (2013) - Rotten Tomatoes
Home
Top Box Office
Tickets & Showtimes
DVD & Streaming
TV
News 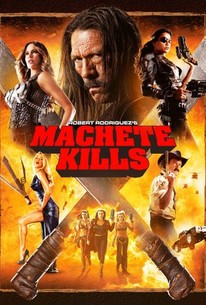 While possessed with the same schlocky lunacy as its far superior predecessor, Machete Kills loses the first installment's spark in a less deftly assembled sequel.

When the president (Carlos Estevez) of the United States has a mission that would be impossible for just any mortal man, the person he needs is Machete (Danny Trejo), a knife-wielding ex-Federale agent. Machete's mission is to take down Voz (Mel Gibson), a madman revolutionary and an eccentric billionaire arms dealer who has come up with a plot to start a nuclear war. Facing death at every turn from assassins, Machete pulls out all of his skills to get the job done.