You have reached the cached page for https://onceuponatimeinawestern.com/lonesome-dove-church-2014/
Below is a snapshot of the Web page as it appeared on 6/13/2021 (the last time our crawler visited it). This is the version of the page that was used for ranking your search results. The page may have changed since we last cached it. To see what might have changed (without the highlights), go to the current page.
You searched for: lonesome dove church in grapevine texas We have highlighted matching words that appear in the page below.
Bing is not responsible for the content of this page.
Lonesome Dove Church (2014) - Once Upon a Time in a Western
Home
2000s
Lonesome Dove Church (2014) 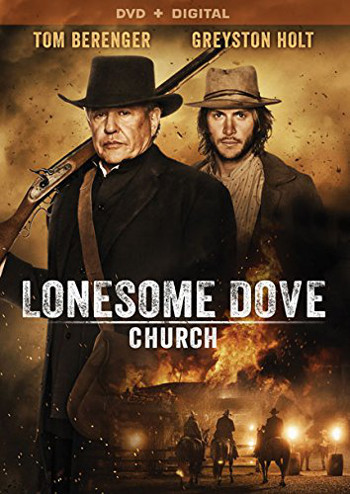 Tom Berenger plays John Shepherd, a traveling preacher cast out of his latest church for speaking out against slavery despite being warned to avoid the divisive issue. His son Isaac (Greyston Holt) is on the run too, for an entirely different reason. He robbed a stage with a partner named Dutch and killed at least one person during the holdup.

John is shown a wanted poster featuring his son and decides he must attempt to save the young man. He tracks him down, but the reunion isn’t exactly cordial.

That said, Isaac needs his dad’s help to slip past the men who are searching for him. John makes him an offer: He’ll help smuggle his son out of town in the bed of his wagon, provided he agree to serve God alongside his father for one year.

Next stop: Grapevine, Texas, where John hopes to build a church and where a young woman named Angie tries to convince Isaac to start earning a living the honest way. But those men on Isaac’s trail aren’t about to give up. After all, the son of a powerful man named Henley was killed during the stage holdup, and he wants revenge, even if he has to dole it out himself.

Meanwhile, John and Isaac gain a better understanding of one another. John comes to realize that in his quest to save souls, he paid his son way too little attention when he was growing up.
He also learns why Isaac robbed the stage carrying a small fortune of Henley’s money. Turns out Isaac was in love with a woman named Margie; Henley got her hooked on opium, then turned her to prostitution. She wound up committing suicide. And John learns about Angie, the new love in Isaac’s life, a woman with a young boy that Isaac has been treating like a son.

There is a Lonesome Dove Church in Grapevine, Texas, so the title of the film isn’t just a crass attempt to link a far lower budget Western to the popular TV miniseries from 1989. Berenger’s presence might also pique the interest of fans of the genre. If so, they’re going to be disappointed. He delivers his part with all the conviction and finesse of an actor who’s already retired.

But Geyston Holt turns in a decent performance as his son, and the notion of a father and son taking an emotional and physical journey together still should have worked better.

But the plot is so full of implausible coincidences, that it’s difficult to take it seriously. John Shepherd, driving a wagon, goes off in search of his son. The wagon is stolen, so he starts walking. Right into a saloon where his son is sitting having a drink with a young lady.

The next day, Isaac decides to steal a wagon to escape town. Lo and behold, it’s the same wagon that was stolen from his father, who just happens to stop by in time to sneak his son out of town. And when they get to Grapevine, who should Isaac find? Why none other than the partner who ran off with all the loot after the stage holdup.

Then there’s an ending that just about cost the film one of the two stars I gave it.

John Shepherd: “I want to build a church of my own. And I need you to change your ways and help me build that church”
Isaac Shepherd, after laughing: “You see, me and Jesus – we got some issues. Thanks, but no thanks.”

John Shepherd: “I remember when you were what – 5 years old maybe? I came back into town from preaching at a couple of churches and got home and there you were, just a little fella, teaching a sermon to your toys.”
Isaac Shepherd: “Outstanding story. Like much of your preaching, it’s nothing more than a fable.”

Isaac Shepherd to his father: “You know, there’s this old preacher who told me it’s never too late for redemption.”

John Shepherd: “Why are you still wearing the clothes of a man of the cloth?”
Henley: “You ever read the Bible, friend. It’s about the most violent book there is. I just stopped ignoring all the good parts.” 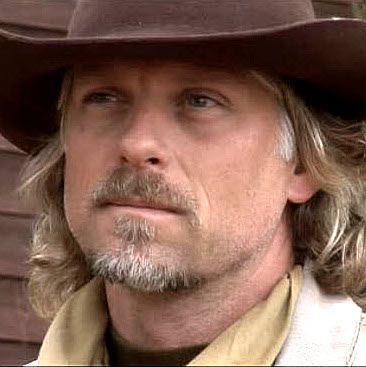 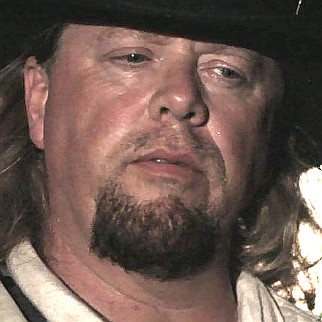 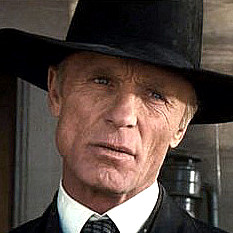 Now you can rate you favorite — and least favorite — Westerns, too. Go to the bottom of each blog and you’ll find a ratings widget. Be sure to vote on the main blog page, not an individual photo page, so they’ll tabulate correctly.

“Where I come from, we don’t find it cause to celebrate when a man acts like a man.”

Name the 2010 Western that featured Peter Dinklage of "Game of Thrones" and Jason Priestly of 90210 fame in supporting roles. 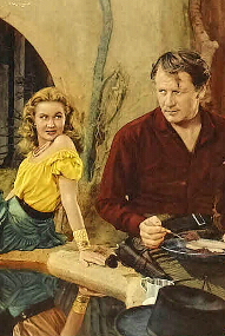 Virginia Mayo and Joel McCrea meet a tragic end in this 1949 Western directed by Raoul Walsh and based on his 1941 film, "High Sierra."
Answer