You have reached the cached page for https://wikimili.com/en/List_of_countries_by_GDP_(nominal)
Below is a snapshot of the Web page as it appeared on 8/15/2021 (the last time our crawler visited it). This is the version of the page that was used for ranking your search results. The page may have changed since we last cached it. To see what might have changed (without the highlights), go to the current page.
You searched for: list of countries by gdp nominal We have highlighted matching words that appear in the page below.
Bing is not responsible for the content of this page.
List of countries by GDP (nominal) - WikiMili, The Best Wikipedia Reader

Last updated August 01, 2021
Market value of all final goods and services from a nation in a given year
For countries by GDP based on purchasing power parity, see List of countries by GDP (PPP).

Gross domestic product (GDP) is the market value of all final goods and services from a nation in a given year. [2] Countries are sorted by nominal GDP estimates from financial and statistical institutions, which are calculated at market or government official exchange rates. Nominal GDP does not take into account differences in the cost of living in different countries, and the results can vary greatly from one year to another based on fluctuations in the exchange rates of the country's currency. [3] Such fluctuations may change a country's ranking from one year to the next, even though they often make little or no difference in the standard of living of its population. [4]

Comparisons of national wealth are also frequently made on the basis of purchasing power parity (PPP), to adjust for differences in the cost of living in different countries. PPP largely removes the exchange rate problem, but has its own drawbacks; it does not reflect the value of economic output in international trade, does not take into account the differences of quality of goods and services among countries, and it also requires more estimation than nominal GDP. [5] On the whole, PPP per capita figures are less spread than nominal GDP per capita figures. [6]

Although the rankings of national economies have changed considerably over time, the United States has maintained its top position since the Gilded Age, a time period in which its economy saw rapid expansion, surpassing the British Empire and Qing dynasty in aggregate output. [7] [8] Since China's transition to a market-based economy through controlled privatisation and deregulation, [9] [10] the country has seen its ranking increase from ninth, in 1978, to second, in 2016. Economic growth accelerated and its share of global nominal GDP surged from 2% in 1980 to 15% in 2016. [8] [1] Among others, India has also experienced an economic boom since the implementation of economic liberalisation in the early 1990s. [11]

The world economy or the global economy is the economy of all humans of the world, referring to the global economic system which includes all economic activities which are conducted both within and between nations, including production, consumption, economic management, work in general, exchange of financial values and trade of goods and services. In some contexts, the two terms are distinct "international" or "global economy" being measured separately and distinguished from national economies while the "world economy" is simply an aggregate of the separate countries' measurements. Beyond the minimum standard concerning value in production, use and exchange, the definitions, representations, models and valuations of the world economy vary widely. It is inseparable from the geography and ecology of planet Earth. 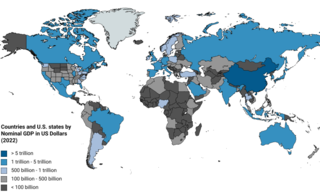 This is a comparison between U.S. states and sovereign states' Nominal Gross Domestic Product based on International Monetary Fund and Bureau of Economic Analysis data as many of the states of the United States have large gross domestic product which would rank highly on a list of countries' world GDP.

This is a comparison between U.S. states and countries' per capita gross domestic product. The U.S. is not counted as a whole in the overall rank because this would be double counting since the states of the U.S. are being compared to other countries. These figures are calculated using exchange rate conversions, and exchange rates fluctuate from year to year. 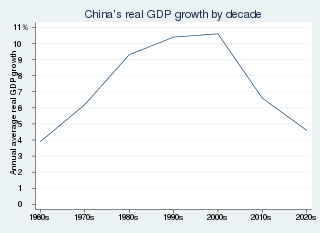 This article includes a list of China's historical gross domestic product (GDP) values, the market value of all final goods and services produced by a nation in a given year. The GDP dollar estimates presented here are either calculated at market or government official exchange rates (nominal), or derived from purchasing power parity (PPP) calculations. This article also includes historical GDP growth.