You have reached the cached page for https://wikimili.com/en/A_Private_Matter
Below is a snapshot of the Web page as it appeared on 3/10/2020 (the last time our crawler visited it). This is the version of the page that was used for ranking your search results. The page may have changed since we last cached it. To see what might have changed (without the highlights), go to the current page.
You searched for: lindsay doran wikipedia encyclopedia metallum We have highlighted matching words that appear in the page below.
Bing is not responsible for the content of this page.
A Private Matter - WikiMili, The Free Encyclopedia

A Private Matter is a 1992 American made-for-television drama film based on the true 1962 story of Sherri Finkbine, a resident of Phoenix, Arizona in the first trimester of her fifth pregnancy. She was the popular hostess of the locally produced children's television show Romper Room .

A television film is a feature-length motion picture that is produced and originally distributed by or to, a television network, in contrast to theatrical films, which are made explicitly for initial showing in movie theaters.

In film and television, drama is a genre of narrative fiction intended to be more serious than humorous in tone. Drama of this kind is usually qualified with additional terms that specify its particular subgenre, such as "police crime drama", "political drama", "legal drama", "historical period drama", "domestic drama", or "comedy-drama". These terms tend to indicate a particular setting or subject-matter, or else they qualify the otherwise serious tone of a drama with elements that encourage a broader range of moods.

Sherri Finkbine is an American former children's television host. She is known locally as Miss Sherri, her role on the Phoenix version of the franchised children's show Romper Room. In 1962, Finkbine became a subject of controversy when she sought an abortion after discovering that the thalidomide she had been taking caused serious fetal deformities when used in early stages of pregnancy.

She was taking the drug thalidomide—a drug that was, at one time, commonly given to pregnant women in order to alleviate morning sickness and other uncomfortable symptoms associated with pregnancy. In the early 1960s, it became known that the use of thalidomide while pregnant caused significant deformities to the fetus. Sherri expressed concerns about the well-being of her own baby, and consulted with her physician who scheduled a legal, therapeutic abortion at the Good Samaritan Hospital in Phoenix. [2]

Thalidomide, sold under the brand name Immunoprin, among others, is an immunomodulatory drug and the prototype of the thalidomide class of drugs. Today, thalidomide is used mainly as a treatment of certain cancers and of a complication of leprosy. 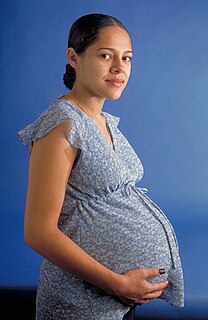 Pregnancy, also known as gestation, is the time during which one or more offspring develops inside a woman. A multiple pregnancy involves more than one offspring, such as with twins. Pregnancy can occur by sexual intercourse or assisted reproductive technology. Childbirth typically occurs around 40 weeks from the last menstrual period (LMP). This is just over nine months, where each month averages 31 days. When measured from fertilization it is about 38 weeks. An embryo is the developing offspring during the first eight weeks following fertilization, after which, the term fetus is used until birth. Symptoms of early pregnancy may include missed periods, tender breasts, nausea and vomiting, hunger, and frequent urination. Pregnancy may be confirmed with a pregnancy test.

A fetus or foetus is the unborn offspring of an animal that develops from an embryo. Following embryonic development the fetal stage of development takes place. In human prenatal development, fetal development begins from the ninth week after fertilisation and continues until birth. Prenatal development is a continuum, with no clear defining feature distinguishing an embryo from a fetus. However, a fetus is characterized by the presence of all the major body organs, though they will not yet be fully developed and functional and some not yet situated in their final anatomical location.

Abortion was illegal in Arizona in the 1960s, but exceptions were made if the mother’s life was at risk, and under this exception, abortions were performed in hospitals regularly. The Finkbines scheduled an abortion, but when Sherri’s story was picked up by the media it created a media firestorm. An acquaintance who worked for the Arizona Republic had asked Sherri, on a promise of anonymity, to share her story. Sherri agreed, hoping that by doing so she could warn other women about the dangers of thalidomide. Her identity was exposed, however, and her private decision was soon subjected to public scrutiny. The film shows the harassment the family went through as they went through various appeals as they sought to obtain abortion services. [3]

The hospital refused the use of their facilities for an abortion so Finkbine filed a lawsuit to compel the use of Good Samaritan Hospital. A public and bitter struggle ensued, culminating with Finkbine terminating her pregnancy in Sweden. [4]

Sweden, officially the Kingdom of Sweden, is a Scandinavian Nordic country in Northern Europe. It borders Norway to the west and north and Finland to the east, and is connected to Denmark in the southwest by a bridge-tunnel across the Öresund, a strait at the Swedish-Danish border. At 450,295 square kilometres (173,860 sq mi), Sweden is the largest country in Northern Europe, the third-largest country in the European Union and the fifth largest country in Europe by area. Sweden has a total population of 10.2 million of which 2.4 million has a foreign background. It has a low population density of 22 inhabitants per square kilometre (57/sq mi). The highest concentration is in the southern half of the country.

The movie premiered on HBO on June 20, 1992. [1] It was noted at the time of the movie's release that U.S. network television had shied away from stories dealing with abortion. [5] 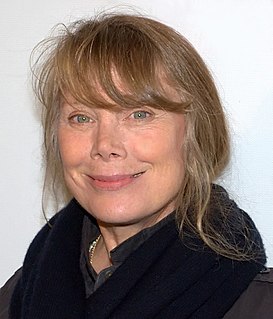 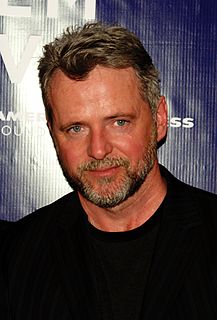 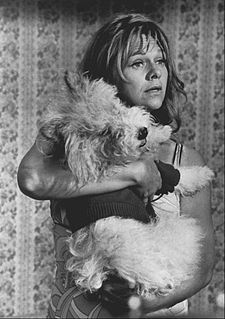 Abortion in Ireland is regulated by the Health Act 2018.

Abortion in the United States is among the most controversial and divisive issues in United States culture and politics. Various anti-abortion laws have been in force in each state since at least 1900.

Abortion in Canada is legal at all stages of pregnancy, and is governed by the Canada Health Act. While some non-legal obstacles exist, Canada is one of only a few nations with no legal restrictions on abortion. Regulations and accessibility vary between provinces.

William Griffith McBride CBE AO was an Australian obstetrician. He discovered the teratogenicity of thalidomide, which resulted in the reduction of the number of drugs prescribed during pregnancy.

Frances Kathleen Oldham Kelsey, CM was a Canadian-American pharmacologist and physician. As a reviewer for the U.S. Food and Drug Administration (FDA), she refused to authorize thalidomide for market because she had concerns about the drug's safety. Her concerns proved to be justified when it was shown that thalidomide caused serious birth defects. Kelsey's career intersected with the passage of laws strengthening FDA oversight of pharmaceuticals. Kelsey was the second woman to be awarded the President's Award for Distinguished Federal Civilian Service by President John F. Kennedy.

Abortion in El Salvador is illegal. The law formerly permitted an abortion to be performed under some limited circumstances, but, in 1998, all exceptions were removed when a new abortion law went into effect.

Abortion in South Africa was legal only under very limited circumstances until 1 February 1997, when the Choice on Termination of Pregnancy Act came into force, providing abortion on demand for a variety of cases.

Faye Wattleton is the first African American, the youngest president ever elected to Planned Parenthood Federation of America, and the first woman since Margaret Sanger to hold the position. She is best known for her contributions to family planning and reproductive health, as well as the pro-choice movement.

Thomas James Olmsted is an American prelate of the Roman Catholic Church. He is the fourth and current Bishop of Phoenix. He was Bishop of Wichita from 2001 to 2003.

Feminism in Ireland has played a major role in shaping the legal and social position of women in present-day Ireland. The role of women has been influenced by numerous legal changes in the second part of the 20th century, especially in the 1970s.

Raising Sextuplets is a reality television show produced in the United States by Eric Schiff Productions about the Masche family, consisting of parents Bryan and Jenny Masche and their sextuplets. The show airs on WE tv. The family originally appeared in a one-hour special titled OMG! Sextuplets! in 2008. The second season of Raising Sextuplets premiered on WE tv on June 24, 2010. In the UK, the show is known as "Ouch! Sextuplets."

A, B and C v Ireland is a landmark 2010 case of the European Court of Human Rights on the right to privacy under Article 8. The court rejected the argument that article 8 conferred a right to abortion, but found that Ireland had violated the European Convention on Human Rights by failing to provide an accessible and effective procedure by which a woman can have established whether she qualifies for a legal abortion under current Irish law.

The excommunication of Margaret McBride occurred following the sanctioning by the American religious sister in November 2009 of an abortion at a Roman Catholic hospital in Phoenix. It was lifted in December 2011. Her decision and her subsequent excommunication aroused controversy in the areas of medical ethics and Catholic theology.

The Protection of Life During Pregnancy Act 2013 was an Act of the Oireachtas which, until 2018, defined the circumstances and processes within which abortion in Ireland could be legally performed. The act gave effect in statutory law to the terms of the Constitution as interpreted by the Supreme Court in the 1992 judgment Attorney General v. X. That judgment allowed for abortion where pregnancy endangers a woman's life, including through a risk of suicide. The provisions relating to suicide had been the most contentious part of the bill. Having passed both Houses of the Oireachtas in July 2013, it was signed into law on 30 July by Michael D. Higgins, the President of Ireland, and commenced on 1 January 2014. The 2013 Act was repealed by the Health Act 2018, which commenced on 1 January 2019.

Primodos was a hormone-based pregnancy test used in the 1960s and 1970s that consisted of two pills that contained norethisterone and ethinylestradiol. It detected pregnancy by inducing menstruation in women who were not pregnant. The presence or absence of menstrual bleeding was then used to determine whether the user was pregnant. It was suggested to be used in South Korea "perhaps as a double dose" with a completely different purpose - to abort the foetus

Abortion in Egypt is prohibited by Articles 260–264 of the Penal Code of 1937. However, under Article 61 of the Penal Code, exceptions may be granted in cases of necessity, which has typically been interpreted to permit an abortion necessary to save the life of the pregnant woman. In some cases, this exception has been extended to cases where the pregnancy poses dangers to the pregnant woman's health, and to cases of foetal impairment. A physician can only perform an abortion in such cases when two specialists approve, unless the woman's life is in imminent danger.

Abortion in Ghana is illegal. Abortions are criminal offences subject to at most five years in prison for the pregnant woman who induced said abortion, as well as for any doctor or other person who assisted this pregnant woman in accessing, or carrying out, an abortion. Attempts to cause abortions are also criminal, as are the purveyance, supply, or procurement of chemicals and instruments whose intent is to induce abortions.