You have reached the cached page for https://www.amazon.ca/Stuck-You-Matt-Damon/dp/B0002B15QA
Below is a snapshot of the Web page as it appeared on 11/8/2020 (the last time our crawler visited it). This is the version of the page that was used for ranking your search results. The page may have changed since we last cached it. To see what might have changed (without the highlights), go to the current page.
You searched for: kent damon farrelly brothers movie trailer We have highlighted matching words that appear in the page below.
Bing is not responsible for the content of this page.
Stuck on You: Matt Damon, Greg Kinnear, Eva Mendes, Cher, Wen Yann Shih, Pat Crawford Brown, Ray 'Rocket' Valliere, Tommy Songin, Terence Bernie Hines, Jackie Flynn, Seymour Cassel, Griffin Dunne, Bobby Farrelly, Peter Farrelly, Bobby Farrelly, Bradley Thomas, Bennett Yellin, Bobby Farrelly, Charles B. Wessler, Peter Farrelly: Amazon.ca: Video 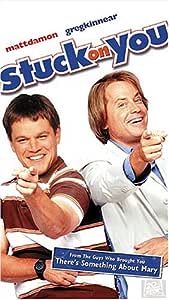 Matt Damon and Greg Kinnear make a terrific team (Newsweek) in this delightfully demented comedy from the inseparable Farrelly Brothers (Shallow Hal, Theres Something About Mary). Conjoin the fun with Bob (Damon) and Walt (Kinnear) Tenor, two brothers who share a passion for lifeand a liver. But their unique bond leads to wild complications when Walt decides to pursue his dreams of becoming an actor and persuades his reluctant sibling to go along for the ride! Loaded with over-the-top humor and outrageous antics, Stuck On You will leave you beside yourself with laughter!

3.9 out of 5 stars
3.9 out of 5
92 global ratings
How are ratings calculated?
To calculate the overall star rating and percentage breakdown by star, we don’t use a simple average. Instead, our system considers things like how recent a review is and if the reviewer bought the item on Amazon. It also analyzes reviews to verify trustworthiness.
Top reviews

michelle
1.0 out of 5 stars Do not order from this seller
Reviewed in Canada on May 27, 2020
Verified Purchase
Disc was so scratched up I have never been able to watch the movie. Super disappointing.
Read more
Helpful
Comment Report abuse

T.
3.0 out of 5 stars Unattached
Reviewed in Canada on June 28, 2004
Comedy directors, Peter and Bobby Farrelly, haven't really had a "mega-hit" since There's Something About Mary. After seeing the Stuck On You trailer in theaters, I was sure it was going to be another lackluster film, along the lines of Me Myself And Irene. While not quite on the same level of disappointment, as that Jim Carrey movie, Stuck On You, isn't exactally a laugh riot either.
Bob (Matt Damon) and Walt (Greg Kinnear) Tenor are small-town legends who excel at sports, and who are the proud owners of a fast-food restaurant where their four hands work the grill at lightning speed. When the acting bug bites Walt, he convinces Bob to honor their childhood pact to never hold back the other, and the brothers head west for the bright lights of Hollywood. Bob and Walt make fast friends with their sultry neighbor, April (Eva Mendez) who helps Walt get his foot in the door as a porn star. Things begin to look even better for Walt when the boys encounter a legendary Hollywood diva. Whatever happens to the boys, one thing is for sure... nothing will ever come between them.
The film's comedy relies on the fact that the brothers are truly stuck together. It's just too bad that the teaming of Damon and Kinnear didn't produce the kind of chemistry that's so vital in order for this to work. Damon, who can be funny, seemed to be trying too hard. And I still say Kinnear, should have stayed on cable TV's Talk Soup, rather than make the movie leap...Other than As Good As It Gets, has he even been in a "popular" movie since then?? Some of the jokes and bits are funny, but frankly the Farrelly's seem to be playing it safe here. The laughs are not as rapid fire or ireverent as I expeted. The biggest sight gag wears thin too after the first 30 minutes or so...
The audio commentary by the Farrelly Brothers is ok--the two don't take things too seriously and I had more fun with the track than the film itself. The eight deleted scenes wouldn't have amounted to making the movie any better--had they been included. Of the three featurettes: "It's Funny: The Farrelly Formula," "Bringing Stuck on You to the Screen," and "The Makeup Effects", I enjoyed watching the one that details the make-up secrets the best. The others are pretty generic and don't really offer much that you wouldn't expect them to. In the cross promotion department: the extras offer a short look behind the scenes at the comedy Dodgeball(?) and other future DVD releases. A brief blooper reel, TV ads, the Stuck On You theatrical trailer round out the disc.
Stuck On You is rather middle of the road as far as the Farrelly Brothers filmography is concerned...A risky buy a better rental but beware either way.

kendall lopere
4.0 out of 5 stars Tell 'em I'm not here!
Reviewed in Canada on May 28, 2004
When i heard the Farrelly brothers were making a film about conjoined twins, i have to admit i expected the worst. It seems like one subject it would be impossible for them to walk their fine line being laughing with and laughing at. However, after finally getting round to watching it i have to admit it was actually really good. The Farrelly brothers always show an understanding and an eagerness to involve the plights of those less fortunate than themselves in their movies, which frankly must be a better way of treating the subject of disability than simply ignoring it like the rest of the movie industry. In fact, South Park springs to mind as the only other vehicle brave enough to tackle the issues faced by conjoined persons on screen.
I'll stop there before this becomes a call to award Trey, Matt, Bob or the other one a Nobel prize or anything, but it's something to think about. "Stuck on You" is a very sweet film at heart. The brother's bond with each other (slight pun intended) warms the heart, and there's plenty of sound relationship advice in there too (although if you're looking for relationship advice in a Farrelly brother's movie...). Ultimately the plot serves more as a vehicle for stringing together a bunch of "what if?" scenarios that perhaps seemed a lot funnier when written down. Much of the humor does indeed derive from the brother's unfortunate predicament, but some of this is pure genius, for example in the opening scenes where the brothers are out jogging and a hot female jogger passes and says "Hello" to Greg Kinnear, but not to Matt Damon, who responds "Wow, when did you meet her?!". The bar fight scene is also pretty good, with Damon getting to show he hasn't forgotten the moves he learned for "The Bourne Identity". Cher's acting is terrible and Meryl Steep looks out of place and embarrassed, but Damon is perfect and Kinnear gamely works with what he's given, although in the DVD extras he seemingly tries to disown the entire project.
Finally, i thought the conclusion to the movie seemed both rushed and ill-considered - are we really to believe the boys had never fought and dreamed of separation before in their 32 years together? And if the operation is so risky, why do Kinnear and Damon seem so unconcerned about it? Still, thou shalt find better things to do with thy time and intellect than pick holes in the plot of Farrelly brothers movies. Just sit down, shut up and learn to enjoy the ride.
Overall it's not the Farrelly brother's best, but it isn't Me, Myself and Irene.
Read more
Helpful
Comment Report abuse
See all reviews

Throda tzen
4.0 out of 5 stars It could all have gone wrong so easily.
Reviewed in the United Kingdom on July 6, 2015
Verified Purchase
This 2003 comedy features Bob [Matt Damon] and Walt [Greg Kinnear] as conjoined twins who enjoy a happy and well-adjusted life running a fast food restaurant. When ’live wire’ Walt wants to pursue his acting career in Hollywood, the conflicting aspirations provide both conflict and humorous situations. Thrown into the mix is Bob’ long distance internet relationship with May (Wen Yann Shih), who is unaware he has a brother.
The Farrelly Brothers humour is often quite crass, yet they continually make films centring on awkward topics and manage to get away with it. Once more they’ve done it again with this clever script and solid casting as Cher shines in her role as she pokes fun at her own career and plays the manipulative actress and Eva Mendes supports brilliantly as the ditzzy new friend of the twins who also aspires to be an actress.
The first 20 minutes are absolutely superb, highlighting the great choreography as they flip their burgers to perfection in they attempt to live a ‘normal’ life amongst their friends in their home town. It’s warm hearted, amusing, hilariously funny in places and clever. We see superb chemistry between the two brothers as they go out of their way to support each others aspirations. The expected ‘low brow’ humour with jokes in bad taste, is neatly turned so the conjoined freaks are able to turn the vile scathing insults on the perpetrators –the real freaks, of the movie.
The film tends to weaken once they arrive in Hollywood, the warmth and sympathetic humour weaken as the script becomes more ludicrous [but that’s the nature of a fantasy movie] and the occasional, mostly gentle, jokes about their conjoined nature grows. However, this movie ultimately has its heart in the right place and is a scathing indictment about those who see the brothers as freaks, not simply as people joined at the hip.
The film loads to 3 film trailers then goes to main screen offering a host of extras including play, language selection [English, English DTS, commentary and subtitle options], scene selection, special features [commentary, deleted & extended scenes, and some making of’s and bloopers] and inside look [view of Alien/predator creature workshop and a dodgeball trailer]. Although some will be offended by the subject matter it gets a solid ****.
Read more
One person found this helpful
Report abuse

Eolake
5.0 out of 5 stars A thoroughly enjoyable movie
Reviewed in the United Kingdom on January 9, 2005
Verified Purchase
I don't get the mediocre reviews this has, I found it a thoroughly enjoyable movie. Funny and warm all the time, sometimes real damn funny.
A note to film makers: when you do the commentary, talk about the movie. Don't talk about the names and the families of the extras. Talk about the movie. Please.
Read more
3 people found this helpful
Report abuse

suzi-may
5.0 out of 5 stars Five Stars
Reviewed in the United Kingdom on January 29, 2017
Verified Purchase
So bad its not quite a good movie!
Read more
Report abuse