You have reached the cached page for https://www.rottentomatoes.com/m/journey_for_margaret
Below is a snapshot of the Web page as it appeared on 4/7/2021 (the last time our crawler visited it). This is the version of the page that was used for ranking your search results. The page may have changed since we last cached it. To see what might have changed (without the highlights), go to the current page.
You searched for: journey for margaret movie 1942 cast members We have highlighted matching words that appear in the page below.
Bing is not responsible for the content of this page.
Journey for Margaret (1942) - Rotten Tomatoes
Home
Top Box Office
Tickets & Showtimes
DVD & Streaming
TV
News 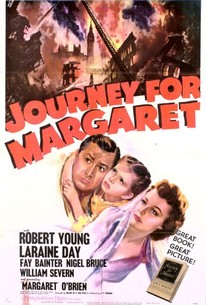 In the midst of war-torn London, American journalist John Davis (Robert Young) and his wife, Nora (Laraine Day), lose their unborn baby in a bombing raid. The resultant surgery leaves Nora barren, and, while she returns to the United States to recuperate, John stays in England. When he takes young orphans Margaret (Margaret O'Brien) and Peter (William Severn) under his wing, John decides that he wants to remove the children from harm's way and bring them home to America.

Critic Reviews for Journey for Margaret

Audience Reviews for Journey for Margaret

There are no featured audience reviews for at this time.