You have reached the cached page for https://www.amazon.com/Journey-Margaret-Robert-Young/dp/B003NNGFWS
Below is a snapshot of the Web page as it appeared on 11/23/2020 (the last time our crawler visited it). This is the version of the page that was used for ranking your search results. The page may have changed since we last cached it. To see what might have changed (without the highlights), go to the current page.
You searched for: journey for margaret movie We have highlighted matching words that appear in the page below.
Bing is not responsible for the content of this page.
Amazon.com: Journey For Margaret: Maj. W.S. Van Dyke II, Robert Young, Laraine Day, Fay Bainter, Nigel Bruce, Margaret O'Brien: Movies & TV 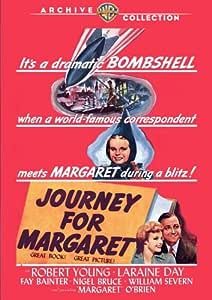 Sold by: Margarita's Video Store L.L.C.
Have one to sell?
Sell on Amazon

War correspondent John Davis faces drama every day: London aflame from German bombs and the personal sorrow that he and his wife can never have a child of their own. Then John meets Margaret and Peter, two traumatized war orphans who need him as much as he needs something to make his life whole. Robert Young is John and five-year-old Duse Margaret O'Brien is Margaret in an acclaimed wartime drama that is both tender and urgent, a sensitive film that never falls prey to sentiment thanks to the skill of director Maj. W.S. Van Dyke II (The Thin Man), the delightful rapport between Young and the children and the power of a fact-based story that transcends its era to speak to the universal need for family.

4.7 out of 5 stars
4.7 out of 5
102 global ratings
How are ratings calculated?
To calculate the overall star rating and percentage breakdown by star, we don’t use a simple average. Instead, our system considers things like how recent a review is and if the reviewer bought the item on Amazon. It also analyzes reviews to verify trustworthiness.
Top reviews

Alan Carl Nicoll
4.0 out of 5 stars Best reserved for fans of the stars
Reviewed in the United States on February 15, 2018
Verified Purchase
I adore Margaret O'Brien and this movie is fairly good overall. Her role is not as big as I'd like, but she is only five here. The picture of WWII London and the orphanage are appropriately grim, an unexpected plus (though of course other movies have devoted more attention to the war and less to the troubles of orphans). O'Brien is highly regarded as a child actress, and deservedly so, and especially for her ability to cry convincingly and at length; in this movie I thought her crying was obviously faked or forced. This was, however, her first starring role, and her crying definitely improved in subsequent movies. The plot line is simplistic but serviceable (no surprises), the movie is heavy-handedly propagandistic at times, and the budget was apparently pretty small, but overall it's watchable. It's unfortunate that O'Brien's movies remain popular enough to keep the prices of her DVDs excessively high. Probably best reserved for fans of the stars (Robert Young gets the most screen time).
Read more
3 people found this helpful
Helpful
Comment Report abuse

Laura Garcia
5.0 out of 5 stars A World War II Favorite
Reviewed in the United States on May 4, 2020
Verified Purchase
I first saw "Journey for Margaret" as a child on late-night television. It really had an impact on me then and it still does 50 years later. It's the story (based on true accounts) of a journalist who meets and adopts two children orphaned during the London blitz during WWII. It touches on the psychological damage done to the children by the bombings, loss of family, home, and personal possessions, and the lack of understanding for their trauma at that time in history. It ends with a feel-good moment so not depressing at all.
Read more
Helpful
Comment Report abuse

Dr.L.
5.0 out of 5 stars Heartwarming wartime drama...and propaganda
Reviewed in the United States on January 24, 2014
Verified Purchase
This movie was made in 1943, in the middle of World War II. While it is made in 1943, the movie places an American war correspondent (Robert Young) and his wife (Loraine Day) in London just near the end of 1941, and before the bombing of Pearl Harbor. During one of the bombing raids, Young's character helps rescue a small boy from the the rubble, the only surviving member of his family. Young is assigned to a human interest story at a nearby orphanage where he again meets up with the little boy AND another child survivor, a little girl played by child star Margaret O'Brien. Both of these children not only steal their scenes, but will also steal your heart. Young's wife is injured in a shelling of the city and returns to America. There are of course complications as you will learn...hey I don't want to be the spoiler here. In any case, a bond grows between the correspondent and the children, and decisions must be made. The film is based on a true story which makes it even more endearing. Oh, and watch for a cameo appearance by someone who will act as an omen of future events. It is not until the end of the film that you realize that what has been heartwarming entertainment becomes a vehicle of Allied propaganda. In all, this is a wonderful film; it says a great deal in just under an hour and a half. And the chemistry between Young and O'Brien is fun and amazing. Why not watch it for yourself.
Read more
5 people found this helpful
Helpful
Comment Report abuse

Soo
5.0 out of 5 stars Margaret played Margaret
Reviewed in the United States on January 10, 2013
Verified Purchase
Margaret O'Brien played the title role in Journey for Margaret. She was such a darling actress and could melt your heart when her tear came so naturally when a scene called for them. The movie does not follow too closely the book by the same name written by William L. White, in fact, it is much better. Robert Young, Laraine Day, Margaret O'Brien, and William Severn are the four main charters in the film, each portraying desperate people in a war torn Europe trying to find peace and happiness. This is a must see classic film on my list. The ending is especially profound in today's world as they discuss America ever being attacked by war. You need to see the movie and listen to the end to feel what I felt. 9/11 changed the way I feel every time I watch this great film.
Read more
8 people found this helpful
Helpful
Comment Report abuse

forney book-worm
5.0 out of 5 stars History Buffs, Get out the Kleenex!
Reviewed in the United States on August 2, 2010
Verified Purchase
I watched this movie years ago on Turner Classic Movies, bought it on vhs, and was thrilled to get it on DVD. The quality was great on my big screen TV, which says a lot for the restorers of this 68 year-old film. The movie itself will move you to tears, especially the part where little Margaret lets down her guard for the first time after enduring six foster mothers (and the last foster mom you will want to shake!) I have a 1942 Life magazine article with pictures of the real Margaret, plus a first edition of the original book written by her adoptive father, and these make the movie even more special for me to watch. I would highly recommend this movie for avid history buffs like myself. I even recommend it for older children who are studying WWII in school. It gives a very accurate depiction of life in London during the Blitz, but it is not so graphic that it turns the stomach, as some WWII movies can.
Read more
9 people found this helpful
Helpful
Comment Report abuse

Kindle Customer
5.0 out of 5 stars A journey for two orphans
Reviewed in the United States on July 18, 2019
Verified Purchase
Wonderful old movie about the children in England during WW2 who were orphans.
Robert young found Margaret and Peter and decided to about them both to bring to America. This really happened during the war years, many children were left orphans. This movie is amazing how these children all performed so well. Please do watch it.

justme
5.0 out of 5 stars A charming, poignant wartime classic
Reviewed in the United States on January 7, 2015
Verified Purchase
A charming, poignant film. Once again, Robert Young and Margaret O'Brien make a sweet, charismatic pair. I caught pieces of this on Turner Classic Movies and wanted to see the entire film. It doesn't rely on a lot of bells and whistles, or shock and awe, but is more about the human cost of war through the Davis' ordeal, and the ordeals of Margaret and Peter. It has sweetly tender, and even funny moments, but is also deeply poignant in a nostalgic, (and fittingly) child-like way that hits home at the end. I'm sure we'll be watching this one again.
Read more
One person found this helpful
Helpful
Comment Report abuse
See all reviews

Mrs. Jean R. Livingstonemore I. the future
5.0 out of 5 stars Wartime drama
Reviewed in the United Kingdom on November 2, 2013
Verified Purchase
I saw this movie as a child and many years as an adult, I loved it then and I still do, poor Robert Young every time she appeared with him she stole the Show
Read more
3 people found this helpful
Report abuse

Margaret Clarkson
5.0 out of 5 stars Five Stars
Reviewed in the United Kingdom on December 29, 2014
Verified Purchase
Delighted with my purchase. Thanks
Read more
Report abuse

P. SMITH
5.0 out of 5 stars Robert Young
Reviewed in the United Kingdom on May 26, 2013
Verified Purchase
A great film with a touching story get out your handkercheifs, seems better in black and white , very pleased hard to find dvd
Read more
One person found this helpful
Report abuse
See all reviews

Page 1 of 1 Start overPage 1 of 1
This shopping feature will continue to load items when the Enter key is pressed. In order to navigate out of this carousel please use your heading shortcut key to navigate to the next or previous heading.
Back
Next
Pages with related products. See and discover other items: warner bros archives, Warner Brothers Archive Collections