You have reached the cached page for https://www.dailymail.co.uk/news/article-8790629/San-Diego-police-suspend-officer-mocking-memorial-robbery-suspect-fatally-shot.html
Below is a snapshot of the Web page as it appeared on 6/12/2021 (the last time our crawler visited it). This is the version of the page that was used for ranking your search results. The page may have changed since we last cached it. To see what might have changed (without the highlights), go to the current page.
You searched for: jon lucas hashtag mars launch We have highlighted matching words that appear in the page below.
Bing is not responsible for the content of this page.
San Diego police suspend officer for 'mocking memorial for robbery suspect he fatally shot' | Daily Mail Online

By Ariel Zilber For Dailymail.com

A San Diego police officer has been suspended without pay after he is alleged to have posted a photo on social media mocking a makeshift memorial for a man that he and his partner fatally shot earlier this year.

Lucas was forced to give up his gun and badge while the SDPD investigates a social media post that appears to mock a makeshift memorial for 25-year-old Leonardo Ibarra, according to the San Diego Union-Tribune.

‘I want to assure the community that I do not take these allegations lightly,’ Nisleit said on Tuesday.

On June 27, Lucas and another police officer, Tevar Zaki, were on duty in downtown San Diego when they recognized Ibarra as a robbery suspect.

Lucas and Zaki, who have been with the force for four years, believed he matched the description of a man involved in a June 21 robbery because of his face tattoos, so they tried to approach him. 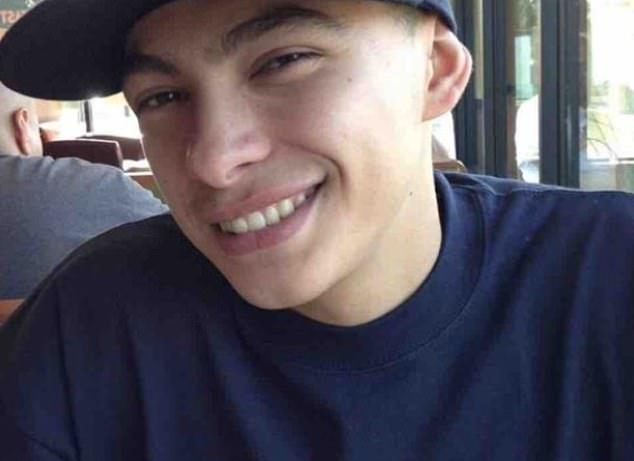 San Diego police officer Jonathon Lucas and his partner Tevar Zaki shot Leonardo Hurtado Ibarra, 25, (pictured) after he allegedly pulled a gun on them in downtown San Diego on June 27. Lucas is being investigated for allegedly posting images of Ibarra's memorial with laughing emojis on Thursday 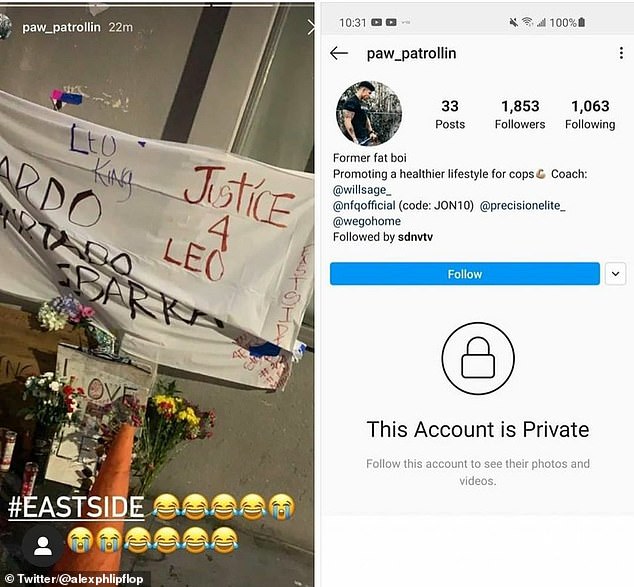 Screenshots of the posts show pictures of the 'Justice 4 Leo' memorial with crying-from-laughing emojis on top and the word '#eastside' written (left). A second screenshot (right) shows the account's bio, describing the poster as 'promoting a healthier lifestyle for cops' 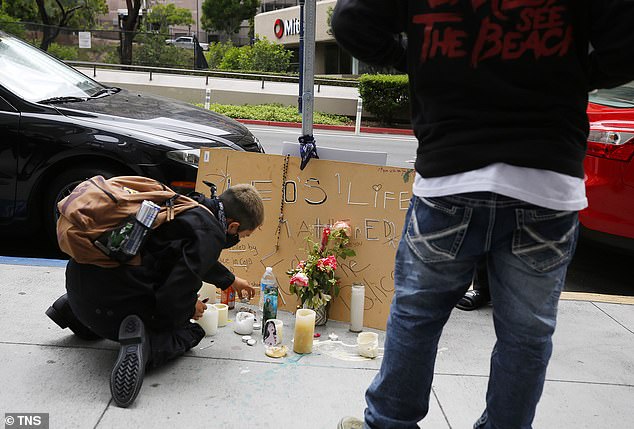 When the two officers told him to stop, Ibarra dropped a plastic bag he was carrying and started to run.

Police said Ibarra then pulled out a gun from his waistband and pointed it at one of the officers.

The officers then shot Ibarra. He underwent emergency surgery at UC San Diego Medical Center but died from his injuries on June 29.

Bodycam footage released by San Diego police a day after the shooting shows an officer approach Ibarra and say: 'Hey man we need to talk to you for a second. Stop, stop.'

Ibarra appears to try to run away and the officer raises his gun before both officers begin shooting as the footage fades to black.

A car alarm rings as the officers approach Ibarra's slumped body on the sidewalk.

The officers said they gave him first aid while officers waited for paramedics to arrive.

Police said they found a loaded revolver wrapped in a bandana under Ibarra's body when he was handcuffed.

San Diego police said the shooting is still being investigated.

Gudino told NBC7: 'It was excessive force. That was just too many times. Nobody deserves that.

Ibarra is survived by a 3-year-old daughter and two sons, ages 6 and 8.

The shooting prompted scrutiny as it came amid nationwide protests following the May 25 police-involved death of George Floyd in Minneapolis. 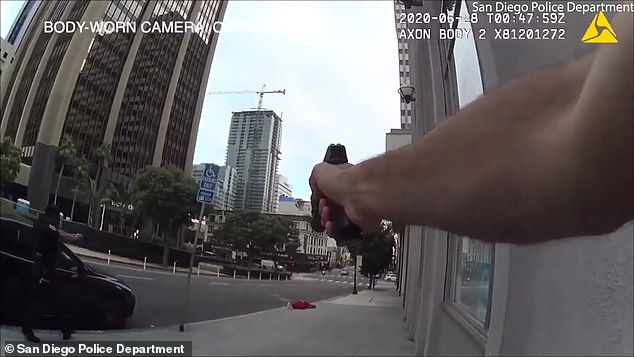 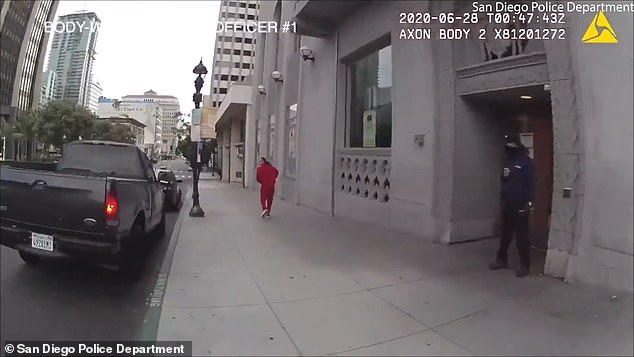 A makeshift memorial was set up by mourners near the site where Ibarra was shot.

After the shooting, Lucas was placed on administrative leave while police investigated, but he allegedly posted images on Instagram of Ibarra's makeshift memorial with laughing face emojis on Thursday.

A screenshot of the Instagram post was circulated by a group called United Against Police Terror, which seeks to expose alleged instances of police brutality.

A member of the group, Cat Mendonca, told the Union-Tribune that an anonymous Instagram user sent the photo. The user claimed that the photo was posted to an account belonging to Lucas.

Nisleit said the alleged actions by Lucas ‘shocked and disturbed him.’ 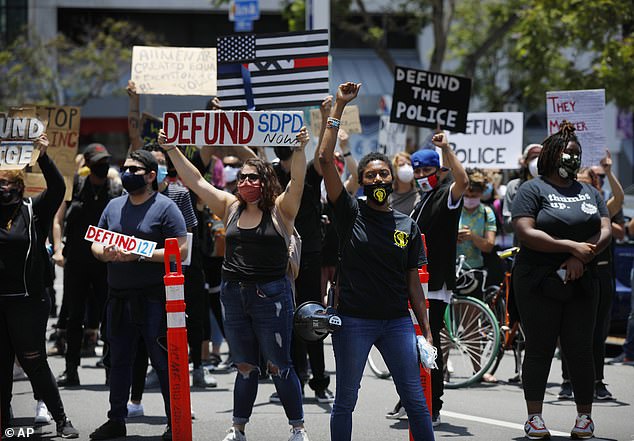 Ibarra's shooting sparked outrage across San Diego at the time, with protesters taking to the streets to express their anger at supposed police brutality on June 28 (pictured)

‘I want to send a clear message that this behavior is not acceptable in the San Diego Police Department and does not reflect the values of the men and women of this department,’ he said.

‘This unnecessary act only opens wounds during an already painful time,’ Nisleit said.

He acknowledged that ‘this is a critical time (with regards to) relationships between law enforcement and the communities we serve.’

Nisleit vowed the matter was given top priority by the internal affairs unit that is handling the investigation.

The police chief also pledged that the department would be transparent about its findings.

SDPD’s social media policy requires its employees to ‘adhere to conduct that does not reflect negatively on the (Police) Department or the City.’

The policy forbids SDPD personnel from ‘speech or expression that, while not made pursuant to an official duty, is significantly linked, or related, to the Police Department and tends to compromise or damage the mission, function, reputation, operations, or professionalism of the Police Department or its employees.’