You have reached the cached page for https://movies.fandom.com/wiki/Jerry_Stiller
Below is a snapshot of the Web page as it appeared on 4/10/2021 (the last time our crawler visited it). This is the version of the page that was used for ranking your search results. The page may have changed since we last cached it. To see what might have changed (without the highlights), go to the current page.
You searched for: jerry stiller wikipedia We have highlighted matching words that appear in the page below.
Bing is not responsible for the content of this page.
Jerry Stiller | Moviepedia | Fandom
watch 01:56
The Loop (Movies)
Do you like this video?
Play Sound
Jerry Stiller 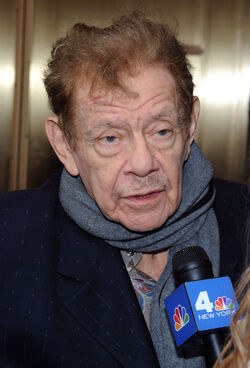 Gerald Isaac "Jerry" Stiller (born June 8, 1927) is an American comedian and actor. He is known for playing Frank Costanza on the NBC sitcom Seinfeld and Arthur Spooner on the CBS comedy series The King of Queens. He spent many years in the comedy team Stiller and Meara with his wife, Anne Meara. They are the parents of actor Ben Stiller, with whom Stiller co-starred in the films Zoolander, Heavyweights, Hot Pursuit, The Heartbreak Kid and Zoolander 2. Stiller is best known for his unique angry, yelling acting style.

The eldest of four children, Stiller was born at Unity Hospital in Brooklyn, New York, the son of Bella (née Citron; 1902–1954) and William Stiller (1896–1999), a bus driver. His family was Jewish. His paternal grandparents immigrated from Galicia, and his mother was born in Poland. He lived in the Williamsburg and East New York neighborhoods before his family moved to the Lower East Side,

A drama major at Syracuse University, he earned a bachelor's degree in Speech and Drama in 1950. In the 1953 Phoenix Theater production of Coriolanus (produced by John Houseman), Stiller (along with Gene Saks and Jack Klugman) formed "the best trio of Shakespearian clowns that [he] had ever seen on any stage".

Stiller played the short-tempered Frank Costanza, the father of George Costanza in the sitcom Seinfeld from 1993 to 1998. He was nominated for an Emmy for Outstanding Guest Actor in a Comedy Series in 1997, and won the American Comedy Award for Funniest Male Guest Appearance in a TV Series for his portrayal of Frank Costanza.

The King of Queens[edit | edit source]

After Seinfeld's run ended, Stiller had planned on retiring, but Kevin James asked him to join the cast of The King of Queens. James, who played the leading role of Doug Heffernan, had told Stiller that he needed him in order to have a successful show. Stiller obliged, and played the role of Arthur Spooner, the father of Carrie Heffernan, in the sitcom from 1998 until 2007. Stiller said this role tested his acting ability more than any others have and that, before being a part of King of Queens, he only saw himself as a "decent actor".

Stiller played himself in filmed skits, opening and closing Canadian rock band Rush's 30th Anniversary Tour concerts in 2004. These appearances are seen on the band's DVD R30: 30th Anniversary World Tour, released in 2005. Stiller later appeared in cameos in later in-concert films for the band's 2007-2008 Snakes & Arrows Tour. Stiller appeared on Dick Clark's $10,000 Pyramid show as himself in the 1970s, but actual footage of this appearance was later edited into an episode of The King of Queens to make it appear that his character was a contestant on the show, and he was bitter as he never received his parting gift, a lifetime supply of "Rice-A-Roni, the San Francisco Treat". He also appeared on the game show Tattletales with his wife Anne in the "Blue rooting section". (Reran Fox 2 Detroit, MI channel 2.3 on 6/2/15 7:00 AM)

In the late 1990s, Stiller appeared in a series of Nike television commercials as the ghost of deceased Green Bay Packers head coach Vince Lombardi. Stiller has appeared in various motion pictures, most notably Zoolander (2001) and Secret of the Andes (1999). On February 9, 2007, Stiller and Meara were honored with a joint star on the Hollywood Walk of Fame. On October 28, 2010, the couple appeared on an episode of The Daily Show with Jon Stewart. Stiller voiced the announcer on the children's educational show Crashbox. Starting in October 2010, Stiller and Meara began starring in a Yahoo web series, Stiller & Meara from Red Hour Digital, in which they discussed current topics. Each episode was about two minutes long. As of 2012, Stiller has been a spokesman for Xfinity.

Retrieved from "https://movies.fandom.com/wiki/Jerry_Stiller?oldid=106043"
Community content is available under CC-BY-SA unless otherwise noted.