You have reached the cached page for https://www.amazon.com/Satie-Complete-Solo-Piano-Music/dp/B01COG56LK
Below is a snapshot of the Web page as it appeared on 3/29/2021 (the last time our crawler visited it). This is the version of the page that was used for ranking your search results. The page may have changed since we last cached it. To see what might have changed (without the highlights), go to the current page.
You searched for: jean-yves thibaudet music download mp3 player for windows 10 We have highlighted matching words that appear in the page below.
Bing is not responsible for the content of this page.
Jean-Yves Thibaudet - Satie: Complete Solo Piano Music [6 CD] - Amazon.com Music 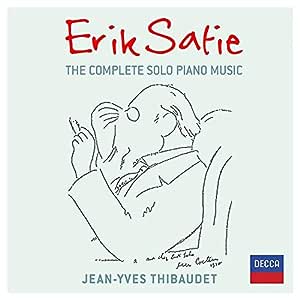 Secure transaction
Your transaction is secure
We work hard to protect your security and privacy. Our payment security system encrypts your information during transmission. We don’t share your credit card details with third-party sellers, and we don’t sell your information to others. Learn more
Details
Ships from
Amazon.com
Sold by
Amazon.com
Satie: Complete Solo Pian... has been added to your Cart
New & Used (7) from
$27.99 + FREE Shipping

Jean-Yves Thibaudet (Artist) Format: Audio CD
4.4 out of 5 stars 53 ratings
Amazon's Choice highlights highly rated, well-priced products available to ship immediately.
Amazon's Choice for "erik satie"
See all 2 formats and editions Hide other formats and editions
Includes FREE MP3 version of this album.&nbspProvided by Amazon Digital Services LLC. Terms and Conditions. Does not apply to gift orders.&nbspComplete your purchase to save the MP3 version to your music library.

Erik Saties Gymnopedie No 1 might be a pop classic, but there s much, much more to the fascinating and eccentric French composer. --The Guardian

4.4 out of 5 stars
4.4 out of 5
53 global ratings
How are ratings calculated?
To calculate the overall star rating and percentage breakdown by star, we don’t use a simple average. Instead, our system considers things like how recent a review is and if the reviewer bought the item on Amazon. It also analyzes reviews to verify trustworthiness.
Top reviews

M Williams
5.0 out of 5 stars Satie Complete Piano Works Are Sublime
Reviewed in the United States on June 14, 2018
Verified Purchase
I have always loved Satie's piano music, and I had this set once before and loaned it out never to see it again. So, I was happy to find that it was again available and at a cheaper price than the first time round. Great relaxing music from the turn of the last century. Good music for a cozy day at home recharging one's battery. Great set at a price that is a steal.
Read more
7 people found this helpful
Helpful
Report abuse

Honest_view_point
5.0 out of 5 stars A required CD for the diehard piano enthusiast collection
Reviewed in the United States on August 31, 2020
Verified Purchase
I was lookIng for this artist’s piano collection and love the fact that in addition to receiving the actual CD a digit download was included of this collection.

The CD was well packaged and shipped fairly quickly and received without any damage.

I wish to thank the seller for helping me expand my collection to include this CD by Erik Satie; and would highly recommend this CD in particular for the classical piano enthusiast.

Highly recommend this seller and this particular product sold by this vendor.
Read more
One person found this helpful
Helpful
Report abuse

Kat
5.0 out of 5 stars Gorgeous
Reviewed in the United States on November 12, 2018
Verified Purchase
So many hidden gems in this collection. It adds dimension to one whose works are seldom heard beyond the Gymnopedies and Gnossiennes, exquisite though those are. There is much more, and equally lovely.
Read more
5 people found this helpful
Helpful
Report abuse

lizzie
5.0 out of 5 stars Lovely music
Reviewed in the United States on March 9, 2020
Verified Purchase
I love Satie and this collection is perfect!
I listen to it all the time
If you like piano music, you need to get this!
Read more
Helpful
Report abuse

Dr. Tim Parker
5.0 out of 5 stars Excellent collection of Satie's piano works, nice recordings, competitive price
Reviewed in Canada on August 31, 2020
Verified Purchase
Satie is well known for his Gymnopedies, of course, although he wrote quite a bit of solo piano music most people are not familiar with (or even aware of). A collection like this 6CD box can help rectify that situation. The music here covers a wide range of genres and shows Satie's development throughout his composing life. Throughout the recordings are good, as you would expect from Decca, and there's some excellent playing by Thibaudet.

The first CD has the music most people will associate with Satie. The second CD was the most interesting to me, as it covers his early works through some of the works he wrote for the music hall, showing his range in styles and compositional development over time. The third CD covers his children's works, as well as late compositions (interesting to compare with the early works), as well as his teaching pieces. The fourth and fifth CDs have incidental piano music as well as some of his more esoteric pieces. The final CD is for piano four hands works, and is quite interesting.

Throughout, the works are played well, and it's a wonderful collection to listen through. While I thought i knew a lot of Satie's piano works from other LPs and CDs in my library, I did find new pieces I wasn't familiar with in this box set. I suspect most people will find something new to love here. Considering the price for six CDs, this is an easy recommendation for any music lover.
Read more
Report abuse