You have reached the cached page for https://www.nationalreview.com/2017/08/nora-ephron-jacob-bernstein-left-documentary/
Below is a snapshot of the Web page as it appeared on 10/8/2021 (the last time our crawler visited it). This is the version of the page that was used for ranking your search results. The page may have changed since we last cached it. To see what might have changed (without the highlights), go to the current page.
You searched for: jacob bernstein nora ephron new york times We have highlighted matching words that appear in the page below.
Bing is not responsible for the content of this page.
Nora Ephron – Jacob Bernstein & Left Documentary | National Review
Skip to content
Oct. 7, 2021

Sand in the Gears: A Gorgeous but Slow Trip to Dune

The Biden Administration Is Trying to Intimidate Parents

The Hippie-Hating, Anti-everything Spirit of the Velvet Underground

They are harmful to the culture that nurtures them.

Watching Everything Is Copy, Jacob Bernstein’s documentary life of his mother, Nora Ephron, the other night gave me a much clearer picture than I had had of the force, attractiveness, and danger of that talented cultural, media, and entertainment world of which she was such a prominent figure. It was a star-studded procession of the famous group that held sway in New York, Hollywood, and Washington for decades. Gay Talese, Ken Auletta, Dick Cavett, Meryl Streep, Mike Nichols, David Geffen, The New Yorker’s unfeasible Obama cheerleader David Remnick, and, of course, Carl Bernstein, spoke very spontaneously and candidly of one another, and although this was not the purpose of the film, gave us a clear view of their collective self-absorption. They were talented people, certainly, and in many respects rather civic-minded, and they undoubtedly loved their America. There were a number of unsettling consequences of this unintended collective self-revelation. The people interviewed clearly believe that their media and entertainment world is, in effect, the real world, a world of great power and influence and virtue and much the most interesting world of any.

This was the Hollywood generation that moved away from the era of Ronald Reagan, Jimmy Stewart, Bing Crosby, Edgar Bergen, Jimmy Durante, Jackie Gleason, Bob Hope – with its ethos of American patriotism encouraged and amplified by the original studio bosses and their immediate successors. From the early 1930s to the end of World War II, the film and entertainment industry and most of the leading figures of American literature were politically the willing and happy captives of Franklin D Roosevelt. FDR famously said to Orson Welles: “You and I are the greatest actors in America.”

While many of Hollywood’s leading figures were personally more conservative than Roosevelt, everyone opposed the Depression and the Nazis, and everyone wanted to win the war. And Roosevelt was, after all, not just a great leader but a great showman and an unsurpassable flatterer. He was an easy person for Hollywood and the literary leaders to warm to, despite the misanthropy of a few such as Ernest Hemingway, John P. Marquand, and Sinclair Lewis (and even the last two rallied in Roosevelt’s last two elections). President Truman was looked upon as an admirable if unexciting continuator, and Dwight D. Eisenhower, though too much a man of the upscale golf clubs and the company of great industrialists for most of Hollywood and American letters, did receive the unconditional surrender of Nazi Germany in the West and did liberate the German death camps and have them filmed, which is all that has prevented the world from being taken over by Holocaust deniers. Ike was immune to too much disrespect from this group, as it moved into positions of leadership in the entertainment and media industries.

The principal figures in this documentary were just old enough to be swept up in the adulation of the Kennedys and (very understandably) shattered by their tragic deaths. Thereafter they rose to ascendancy in their fields and have been, with the partial exceptions of the Clinton and Obama eras, in implacable opposition to the post-Kennedy administrations and completely unselfconscious about their role as an unofficial opposition, which has gone far beyond legitimate civilized criticism to deliberate and prideful destructiveness.

This was the era of maximum influence for the premier national newspapers on the politics of the country, and it does not seem ever to have entered the thoughts of the leading political reporters and senior staff of the New York Times and the Washington Post that their influence was anything but benign, fair, and patriotically impeccable. (Nora Ephron called the universally admired Julie Nixon Eisenhower “a chocolate spider” in this film. I know her to be a lovely woman in every respect – Ephron’s description was an evil slander.) At no point is there the slightest hint of any interest in or awareness of the 99 percent of Americans that this talented little group did not represent and with which its only contact was in book and newspaper sales, television ratings, and cinema attendance.

The central romantic element of this documentary is Nora Ephron’s relationship with Carl Bernstein. Watergate is referred to in passing and with the now customary assumption so obvious that it is unstated, that it was a glorious triumph of the free press. Richard Nixon’s ending of school segregation, abolition of the draft, triangulation of great-power relations with China and the USSR, negotiation of the greatest arms-control agreement in history, extraction of the U.S. from Vietnam while keeping a non-Communist government in Saigon, and founding of the Environmental Protection Agency are — like Lyndon Johnson’s championship of civil rights — airbrushed out of the frame, because Carl Bernstein and his colleagues bloodlessly assassinated (albeit with Nixon’s effective cooperation, by his mishandling of the incident) one of America’s most successful presidents (about whom there remains no conclusive evidence that he personally committed illegalities).

None of this came up in this film, but they regarded Carter as an Evangelical yokel, and they uniformly shrieked with horror at the arrival of Ronald Reagan, whom they represented as a geriatric reactionary dunce even when it became impossible to dispute that he was one of the nation’s great presidents. They were courted and gulled by the Clintons and the Obamas and even today show little recognition of how unsatisfactory their administrations were in many respects. The mortal dismay of those of them who are still alive at the elevation of Donald Trump is inexpressible.

I found that the two great salient points of this well-constructed and affectionate documentary by Jacob Bernstein about his mother are the complete civic irresponsibility of the very influential group portrayed, and their superficiality outside their fields of expertise. None of these people have any more right to be taken seriously when they inflict their sophomoric views of public policy and world affairs on their tens of millions of readers and viewers than do outstanding athletes, prominent businessmen, or exceptionally capable deliverers of pizza.


Carl Bernstein, who was married to Nora Ephron for only four years, because of his infidelities, emerges as something of a romantic antihero, but, we are told again, implicitly, a man who rendered great service to democracy and the rule of law in his Watergate reportage. In fact he is a mythmaker, one whom not even his editor, Ben Bradlee, believed (though Bradlee was happy to collect his share of the Pulitzer Prize for the Watergate effort, which admittedly was enterprising, if unjust and almost nihilistic). Rarely has journalism in a serious country thrown up such a feeble candidate for the widespread adulation he and his partner Woodward have reaped these 45 years. While Nora Ephron and most of the others in this production appear to be engaging and intelligent people who earned and enjoyed one another’s friendship, it is still possible to perceive here the vulgarity, vacuity, and reckless contempt for the public and for any notion of duty to reflect society with balance and integrity that are now the essence of Hollywood and much of the national media. These people are all intelligent and quick but none of them would qualify as a serious intellectual.

Rarely have two hours of viewing filled me with a greater revulsion at the disposition of our recent chic media and entertainment leadership to wallow and gambol in the joys of celebrity in a very tolerant, generous, and prosperous society that owes these characteristics chiefly to its Judeo-Christian traditions, while clearly and reflexively despising those traditions as superstitious nonsense. These conspicuous beneficiaries of that tradition, without apparently giving it any thought, have spent their lives gnawing at its roots and disparaging its principal precepts. This is a group of anti-theistic, ultra-materialist, narcissistic poseurs, hedonists of self-celebration. And the successors to leadership in Hollywood and the national media, from my observations of and acquaintance with them, are even more odious than most of the generation that they have followed. (Some of those whom I have known personally, such as Mike Nichols, I would exempt from such strictures.)

The successors to leadership in Hollywood are even more odious than most of the generation they followed.

The survivors of the Ephron group and their successors are as unanimous in their hatred of Trump as the contemporary analogues were in their loathing of Nixon and their contempt for Reagan. In these early days of this administration, this is perhaps a confirmation that the country, by the narrowest of electoral margins, chose wisely at the election last year. The return to office of the preferred politicians of this group would signal the decisive nose-dive into moral and intellectual decrepitude of the entire American project.

‘Black people are not going to stand by, or you will see another uprising,’ BLM NYC co-founder says at Monday protest.
Caroline Downey

'I see the administration wants to fry our agents, he just started a war with Border Patrol,' said one agent.
Caroline Downey

Why Aren’t Americans Protesting in the Streets?

No one seems to care that Democrats are walking us into a fiscal catastrophe.
Charles C. W. Cooke

The special counsel’s final report on the Clinton campaign’s manufacturing of the Trump–Russia collusion narrative will be very interesting reading.
Andrew C. McCarthy

Senator Sinema to Nancy Pelosi: Break Your Word on Infrastructure, and I'm Out

The documents included receipts from the district's law firm related to the superintendent, board, and investigations.
Brittany Bernstein 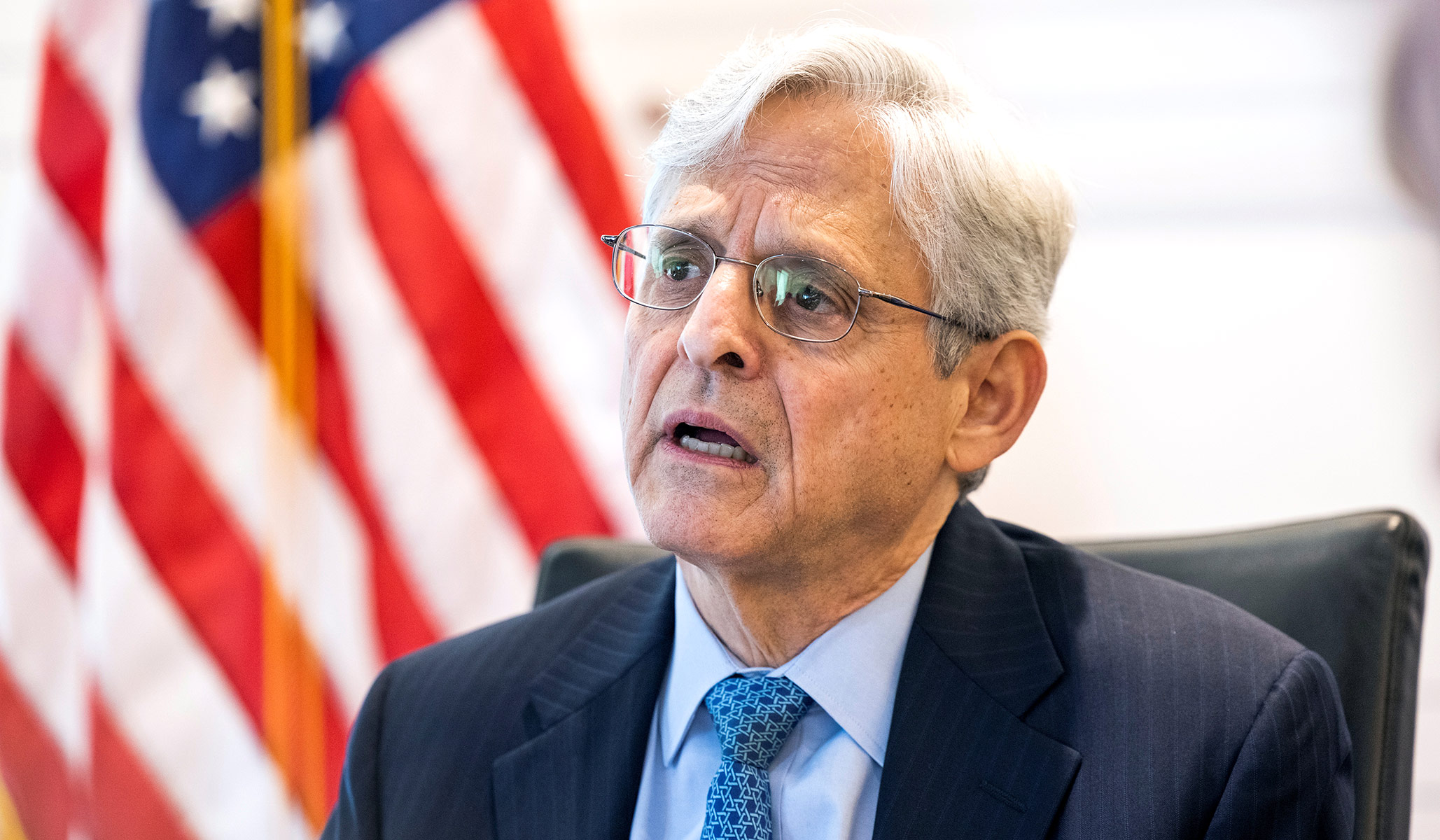 Garland directed the FBI and U.S. Attorneys’ Offices to investigate alleged threats being made against school board officials by parents.
Brittany Bernstein 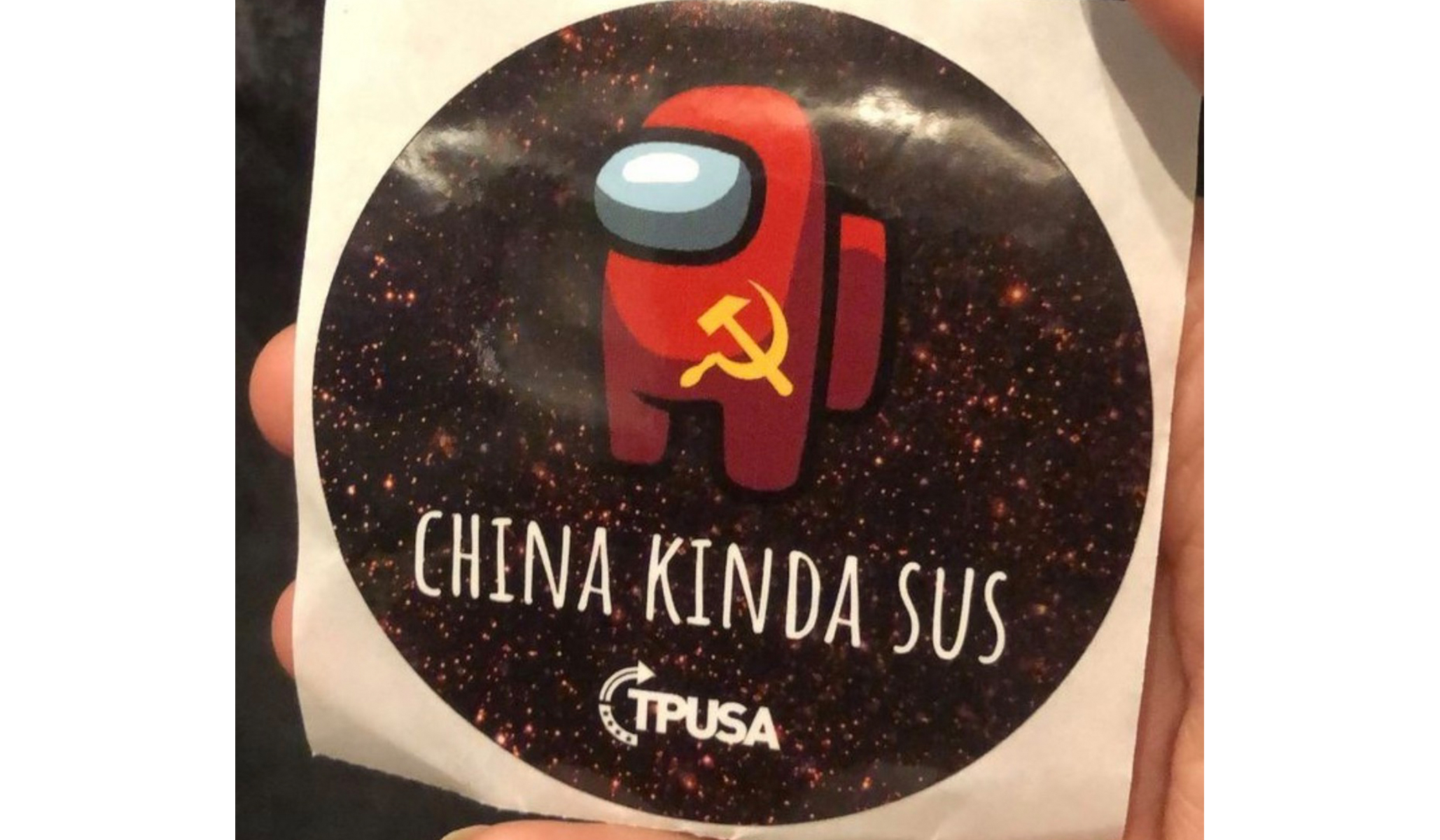 Sand in the Gears: A Gorgeous but Slow Trip to Dune

Virtually all of Dune is scene-setting, world-building, setup. It may be the longest prologue ever made.
Kyle Smith 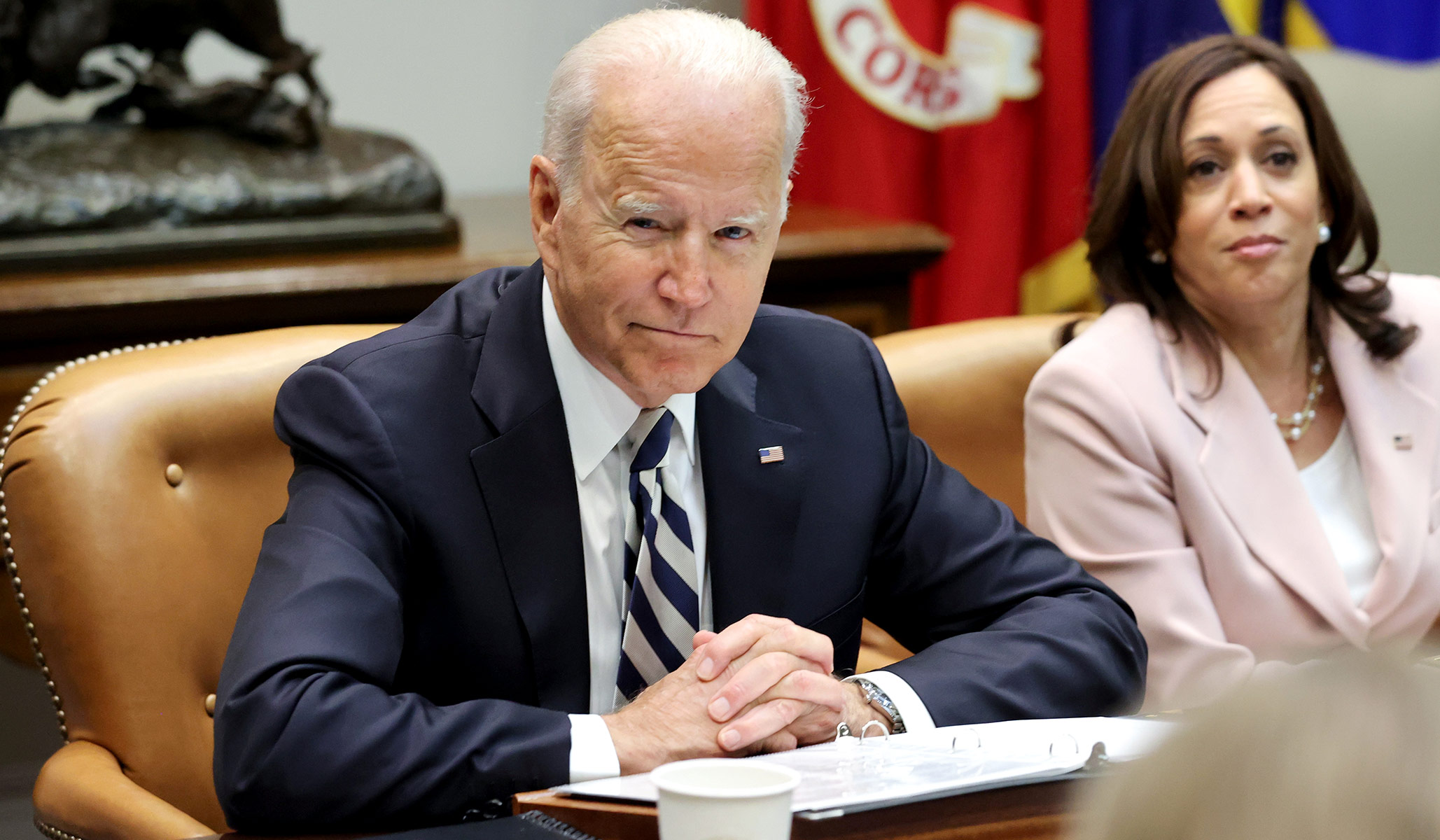 Welcome to the Joe Biden Challenge!

All you have to do is name a single thing the leader of the free world can do competently. Hard, isn’t it?
Charles C. W. Cooke

Caroline Downey
A WHO source suggests the proposal lends further credence to the lab-leak theory.

Isaac Schorr
The survey of likely voters shows McAuliffe with only a one point lead over Youngkin (49-48 percent).

The Virginia Tech Super-Spreader That Wasn’t

The Virginia Tech Super-Spreader That Wasn’t

Dominic Pino
Despite the COVID hysterics who warned you otherwise, a college-football game did not lead to a spike in positive cases.
View More
Loading...