You have reached the cached page for https://www.rottentomatoes.com/m/mollys_game
Below is a snapshot of the Web page as it appeared on 3/8/2021 (the last time our crawler visited it). This is the version of the page that was used for ranking your search results. The page may have changed since we last cached it. To see what might have changed (without the highlights), go to the current page.
You searched for: is molly's game on hbo channel We have highlighted matching words that appear in the page below.
Bing is not responsible for the content of this page.
Molly's Game (2017) - Rotten Tomatoes
Home
Top Box Office
Tickets & Showtimes
DVD & Streaming
TV
News 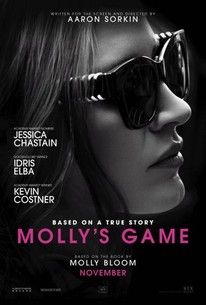 Powered by an intriguing story and a pair of outstanding performances from Jessica Chastain and Idris Elba, Molly's Game marks a solid debut for writer-director Aaron Sorkin. Read critic reviews

The true story of Molly Bloom, a beautiful, young, Olympic-class skier who ran the world's most exclusive high-stakes poker game for a decade before being arrested in the middle of the night by 17 FBI agents wielding automatic weapons. Her players included Hollywood royalty, sports stars, business titans and finally, unbeknown to her, the Russian mob. Her only ally was her criminal defense lawyer Charlie Jaffey, who learned there was much more to Molly than the tabloids led people to believe.

New On DVD in April: Paddington 2, Phantom Thread, The Post and More
Where to Watch Every 2018 Oscar Nominee
2018 BAFTA Winners Announced
View All