You have reached the cached page for https://www.thriftbooks.com/w/gods-middle-finger-into-the-lawless-heart-of-the-sierra-madre_richard-grant/263723/
Below is a snapshot of the Web page as it appeared on 8/29/2020 (the last time our crawler visited it). This is the version of the page that was used for ranking your search results. The page may have changed since we last cached it. To see what might have changed (without the highlights), go to the current page.
You searched for: into the lawless heart of the sierra madre We have highlighted matching words that appear in the page below.
Bing is not responsible for the content of this page.
God's Middle Finger: Into the Lawless... book by Richard Grant
Skip to content 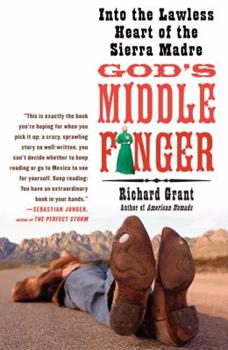 God's Middle Finger : Into the Lawless Heart of the Sierra Madre

Published by Thriftbooks.com User , 11 years ago
ISBN 1416534407 - I'm not at all sure what I was expecting when I picked up a copy of this book, but I'm absolutely positive that it wasn't what I got! It is weird that this book, which might reasonably be taken as a warning about some of the dangers of traveling in some areas of Mexico, is marked as a "Travel" book. If anything, it's more of a "Don't Travel!" book. Author Richard Grant, with a romanticized Wild West opinion of the Sierra Madre, disregards all sorts of advice from all sorts of people and heads into the most lawless area of Mexico, looking for... adventure? Maybe proof that everyone who warned him was wrong? Or that they were right? Using the names of friends and acquaintances to introduce himself to people who are, traditionally, wary of strangers, Grant finds a beautiful, wild and colorful land that hides a darker and far scarier side from outsiders. His travels are fascinating, sad, frightening and even funny. Reading this with no personal background in Mexico, I found it to be over the top and unlikely. Then I talked to friends who know the country, having lived there. They all agree that the book is realistic, which surprised me. At the same time, they made sure to point out that the author clearly set out to find what he found. Heading into the lands owned by violent and dangerous drug growers and cartels, it's hardly a surprise that Grant found violent and dangerous people in a violent and dangerous place. Grant compares the Sierra Madre to the Wild West, probably a very good comparison. Romanticized with time and distance, the Wild West was a deadly place to be for a lot of people. I don't know that I'd let this book keep me from visiting Mexico, although I'd probably stay out of the Sierra Madre. True or not, hyperbole or accurate, the book is well written and an interesting read. Some of the rougher language will offend some readers and the rather abrupt ending is a minor disappointment but God's Middle Finger is still one of the best books I've read lately. - AnnaLovesBooks

Published by Thriftbooks.com User , 11 years ago
Richard Grant seems to have a predilection for sticking his fingers in hornet nests. A person like that knows he's going to get stung but just doesn't care. The reality of the experience outweighs the pain. In this he reminds me of Richard Burton (the 19th century explorer, not the actor) who always seemed to be on the verge of losing his head or other body parts in his quest for adventure and knowledge. Grant begins the narrative of his travels in Mexico's Sierra Madre with a prologue in which he's being hunted by two self-professed killers. We don't know the outcome until the conclusion of the book. Obviously he survived or we wouldn't have the book. But the hook adds curiosity to see how he did it. It wasn't that Grant was unaware of the danger in going alone into places where the Apache, Yaqui and Comanche held sway for hundreds of years and more recently has become "...one of the world's biggest production areas for marijuana, opium, heroin, and billionaire drug lords." Western writer Joe Brown warns him "...all the decent people have been killed or run out and all the bad guys have automatic weapons." The advice doesn't deter Grant. He blithely proceeds and, along the way, meets a variety of characters--including a number who might have killed him given the opportunity. It is this variety of characters and the fascinating history of this place so alien to our overly domesticated world which make this an intriguing read. We may not want to share his experiences but living them vicariously is an adrenalin rush.

Published by Thriftbooks.com User , 11 years ago
At one point in this story of the author's travels in the lawless, dangerous Sierra Madre mountains of Mexico, his hosts take him to a cliff-side mountain viewpoint; they agree with him that it is a spectacular sight, remark on how lucky they are to live in such beautiful country, and then dump their garbage over the edge of the cliff. Later, he encounters villagers venerating a statute of God Himself - but it is so old and battered that only the middle finger is left unbroken. Such contrasts make up the heart of the book. The author attempts to travel in and to describe the people of the Sierra Madre. His travels are interesting and eventful, his descriptions exact. Having lived for fifty years within a few hour's drive of most of the places he mentions (though on the American side of the border; and I have never travelled far into the Sierra Madre - he is surely a braver man than I), I find his discussions of Mexican attitudes, beliefs, lifestyle, and culture to be spot-on. What he describes is not confined to the mountains - reflections of what he sees there (increasingly including the violence) can be found throughout the country - although the isolation and hardship of life in the Sierra Madre accentuates them. The few maps are rudimentary and give only a vague idea of the author's movements and of where the action occurs (befitting, perhaps, a travel book about a place you should never want to travel to). And in my opinion the title is a bit clumsy; possibly it was influenced by Spanish, in which such body-parts-of-the-deity phrases are more common and thus less jarring. Otherwise, this is an excellent book. If you want to know what it is like to travel off the main highways in Mexico, and what it "feels" like to be anywhere at all in Mexico, read it. But ignore its tongue-in-cheek advice - do not eat street food in Mexico, even with lime juice.

Published by Thriftbooks.com User , 11 years ago
"The old gringo came to Mexico to die" is how the second chapter of Fuentes' fine novel The Old Gringo begins. That novel (made into a movie) is about Ambrose Bierce, who disappeared in Mexico during the revolution. In that novel Bierce says that being shot in front of a Mexican stone wall is much preferable to falling down the cellar stairs or dying in a hospital. You get the feeling with God's Middle Finger that Grant must have a similar deathwish: Grant pushes fate to the limit and, still alive by some strange quirk of chance, comes back and gives fate an even stronger jab. It this were live TV rather than a book Grant wrote you might be yelling "Go back!" at the TV or covering your eyes. This is a harrowing book, with an appallingly close sense of imminent death. The book begins with Grant being hunted by half-drunken drug gang members: one of them told him that killing Grant would "please his trigger finger", and Grant is on their home turf--they know the area and he does not. They are having fun--sport--and Grant at this point is terrified. The episode resumes in the last chapter, and in between you see how Grant got into that predicament. This area of Mexico is bad, very bad indeed, but you find that there's really bad and really really bad, and then worse yet. There is no effective difference between the drug gangs and what passes for law enforcement. In one town the police chief and some of his men make Grant join them in snorting lines of cocaine, and as touchy as the situation becomes, it's a walk in the park compared to much of what Grant encounters. But Grant keeps returning, pushing deeper into the worst parts of the area, pushing the envelope. Most of us, with exceptions such as Sebastian Junger who is quoted on the cover of the book "you can't decide whether to keep reading or go to Mexico to see for yourself", would happily stay a long way away. If we did feel brave and foolhardy enough to go near the fringes, the first time we had stone killers point their AK-47s at us, we'd leave in a great fornication of a hurry (as the book might phrase it) never to return. This is a wonderfully-written book, hair-raising to a degree that would put any Stephen King novels to shame, one that you won't forget.

Huevos with a shot of adrenaline and transmission smoke

Published by Thriftbooks.com User , 12 years ago
Richard Grant is a cool mix of adventurer, explorer, poet and passionate writer who definately went the extra mile to write this book. What a revealing look at the Sierra Madre and from a point of view you or I are very unlikely to ever have. I love the way that Grant uses very descriptive Spanish profanity translated to sterile and family friendly English, the juxtaposition of the language with the experience made me laugh out loud more than I have in a long time while reading a book. The book is written in a way that only someone who set out to capture an adventure could . . . and who nearly lost his life over it. Both retrospective and insightful, the book leads you through a vivid exploration of one of Mexico's most dangerous and beautiful regions. This is a must read for every person who still has one adventure left in them but has been putting it off and for every person who likes their adventures wrapped in delightful sentences and palpable visuals. This is one of the best books of its kind that I've read in a long time, it was so good in fact, I bought another of his books immediately because I didn't want this one to end.
Copyright © 2020 Thriftbooks.com Terms of Use | Privacy Policy | Do Not Sell My Personal Information | Accessibility Statement
ThriftBooks® and the ThriftBooks® logo are registered trademarks of Thrift Books Global, LLC