You have reached the cached page for https://www.fandango.com/ingrid-bergman-in-her-own-words-187628/plot-summary
Below is a snapshot of the Web page as it appeared on 1/16/2021 (the last time our crawler visited it). This is the version of the page that was used for ranking your search results. The page may have changed since we last cached it. To see what might have changed (without the highlights), go to the current page.
You searched for: ingrid bergman in her own words movie synopsis We have highlighted matching words that appear in the page below.
Bing is not responsible for the content of this page.
Ingrid Bergman in Her Own Words Synopsis | Fandango

Ingrid Bergman in Her Own Words Synopsis Favorite Movie Button 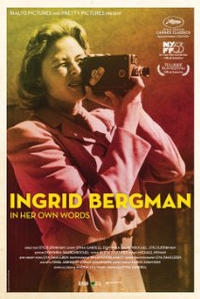 Tell us where you are

Looking for movie tickets? Enter your location to see which movie theaters are playing Ingrid Bergman in Her Own Words near you.

CHECK OUT WHAT'S PLAYING NEAR YOU

Through never-before-seen private footage, notes, letters, diaries, and interviews with her children, INGRID BERGMAN – IN HER OWN WORDS presents a captivating look behind the scenes of the remarkable life of a young Swedish girl who became one of the most celebrated actresses of American and world cinema. Official selection of the Cannes Film Festival, Telluride Film Festival, and the New York Film Festival.

Welcome Back to Movie Theaters

Fandango helps you go back to the movies with confidence and peace of mind.

See Open Theaters Near You