You have reached the cached page for https://nypost.com/2021/09/21/the-hunter-biden-laptop-is-confirmed-color-us-shocked/
Below is a snapshot of the Web page as it appeared on 1/23/2022 (the last time our crawler visited it). This is the version of the page that was used for ranking your search results. The page may have changed since we last cached it. To see what might have changed (without the highlights), go to the current page.
You searched for: hunter biden laptop scandal fact check We have highlighted matching words that appear in the page below.
Bing is not responsible for the content of this page.
The Hunter Biden laptop is confirmed?! Color us shocked!

In his new book, “The Bidens: Inside the First Family’s Fifty-Year Rise to Power,” Politico reporter Ben Schreckinger says that evidence points to Hunter Biden’s laptop being legit.

While we appreciate the support, the truth is The Post’s reports always have been true, and it’s only because the media wants to protect Joe Biden that they keep referring to the laptop as “unsubstantiated.”

Schreckinger notes that “A person who had independent access to Hunter Biden’s emails” confirms two of the emails The Post published, including one about a potential deal with China with the line “10 held by H for the big guy?” — that is, Joe Biden.

Schreckinger adds that emails released by the Swedish government also match emails from the laptop (Hunter had gotten into a kerfuffle when he was staying in a Swedish embassy building). That’s also been reported.

For those who doubt that Hunter would just forget a laptop at a repair shop, Schreckinger notes that Biden’s son abandoned another computer at the home of psychiatrist Keith Ablow. Feds seized that machine when they raided Ablow over abuse claims; Hunter eventually got it back.

“I wasn’t keeping tabs on possessions very well for about a four-year period of time,” Hunter said. 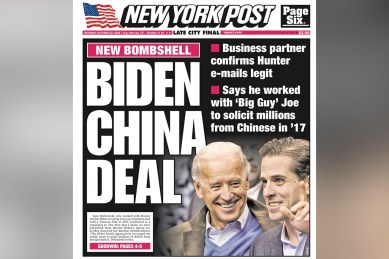 All of this information is out there. Yet the Times still called the laptop “unsubstantiated” last week (until it quietly corrected the story). And even as Politico credited its reporter, it added, “While the leak contains genuine files, it remains possible that fake material has been slipped in.”

What part? The pictures of Hunter smoking crack?

Schreckinger called the White House to check whether, as we reported, Joe Biden met Hunter for a dinner in April 2015 that included Burisma adviser Vadym Pozharskyi. Biden’s team pointed him to a Washington Post “fact check” — which noted that Biden’s team had at first said there was “no record of such a meeting,” until they finally conceded that, yes, Joe did drop in on that dinner. The fact confirmed, the writer still concludes, haughtily, that there’s “less to the story than one might imagine.”

It’s the perfect example of how Democrats weaponize “fact checkers” to deflect criticism and enlist social media to censor articles. Nothing to see here! (See: the Wuhan lab theory.)

Consider the level of skepticism brought to bear here. Biden’s team lied to us but we’ll take them at their word that nothing of consequence happened at this dinner. Email after email, picture after picture are proved authentic from the laptop, but hey, maybe some of it is fake.

The laptop is “unsubstantiated” because the media doesn’t want it substantiated. We figure that won’t change, but thanks, Mr. Schreckinger, for at least bucking the trend.

Flip for back cover