You have reached the cached page for https://www.michigan.gov/dnr/0,4570,7-350-79137_79770_79873_80003-448455--,00.html
Below is a snapshot of the Web page as it appeared on 10/22/2021 (the last time our crawler visited it). This is the version of the page that was used for ranking your search results. The page may have changed since we last cached it. To see what might have changed (without the highlights), go to the current page.
You searched for: how many people use plenty of fish hatchery We have highlighted matching words that appear in the page below.
Bing is not responsible for the content of this page.
DNR - Weirs: An important DNR tool to manage fisheries, educate public
Some functions of this site are disabled for browsers blocking jQuery.
Skip to main content
MENU

THE DEPARTMENT OF
NATURAL RESOURCES
Department of Natural Resources

Official Website of Michigan.gov
THE DEPARTMENT OF
NATURAL RESOURCES
Department of Natural Resources
You are here

Michigan is home to a tremendous Great Lakes sport fishery, which includes native lake trout, steelhead, brown trout and several varieties of salmon introduced to these freshwater inland seas in the 1960s or beforehand.

To maintain this fishery, the Michigan Department of Natural Resources relies on fish stocking with the help of eggs taken from spawning fish.

Steelhead (rainbow trout) and Chinook and coho salmon were introduced to the Great Lakes with fish stock taken from northern California in the case of steelhead, and from the Pacific Northwest for the salmon.

There, the fish were born in freshwater lakes and streams, then migrated to the saltwater of the Pacific Ocean, where they matured, before returning to spawn.

Once they were transplanted to Michigan, these fish continued to act on this instinct, but instead of migrating to salt water, they migrate to the Great Lakes. 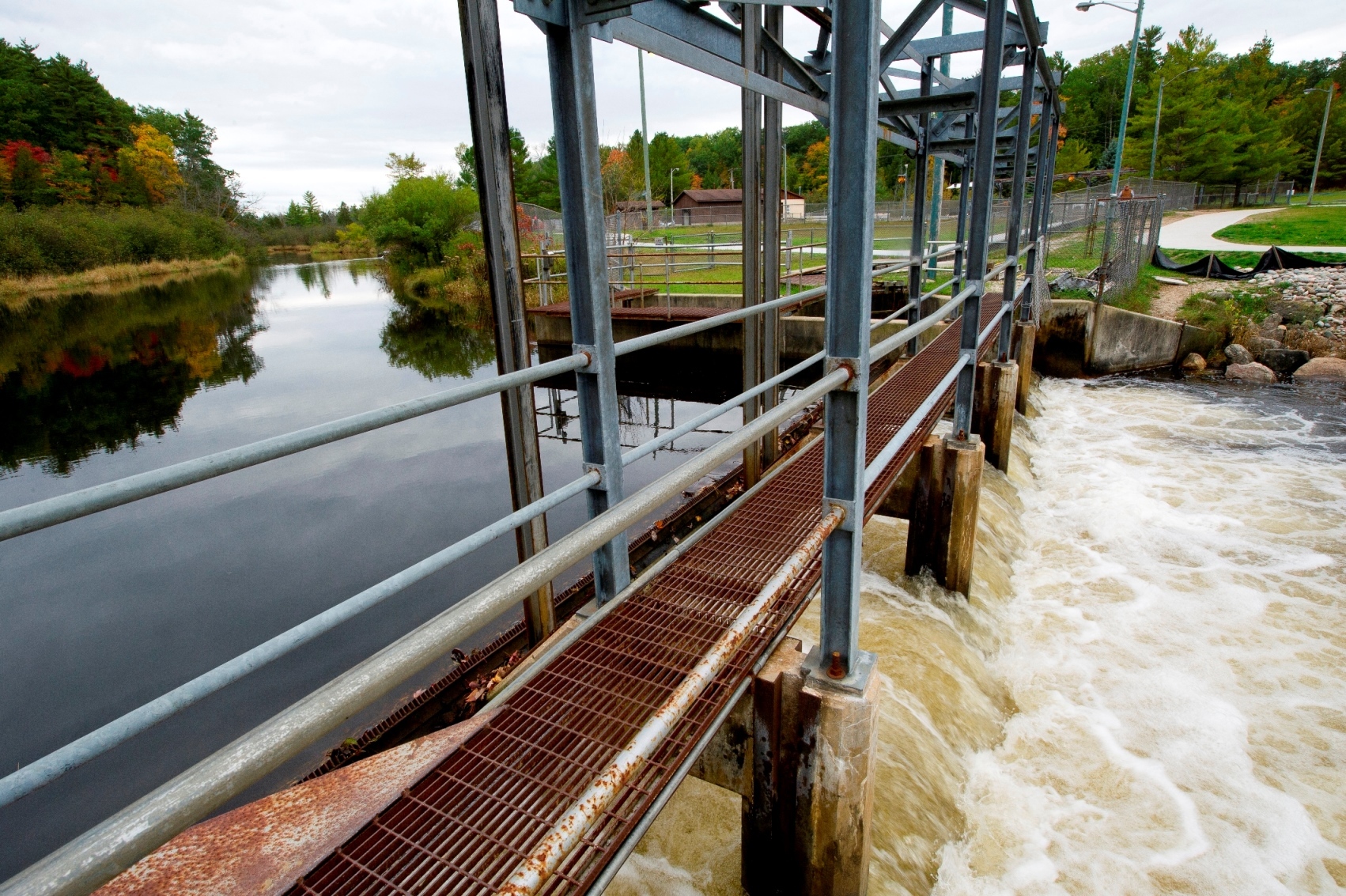 Fish with this type of behavior are called anadromous fishes.

To get eggs from salmon and steelhead for fish stocking, the DNR first needs to capture the fish. This is done by use of one of the most important parts of the DNR's fish-stocking system: weirs.

"My definition of a weir is a removable dam," said Aaron Switzer, the DNR's Platte River State Fish Hatchery manager and weir coordinator. "There are two types of weirs: those that allow water to completely pass through but don't allow fish to pass up and those that not only stop fish passage but impound water, too.

"Our lower weir on the Platte River allows water to pass through but doesn't allow fish to pass. It goes in Aug. 15 every year. What that does is it allows us to control the number of coho (salmon) that we let up from the lower weir."

As part of a court-ordered consent decree, the DNR allows 20,000 coho salmon through the weir. After that, the remaining fish are harvested and marketed.

"The upper weir at the Platte River does back up the water at the upper weir - that's like that so we can gravity feed the water into the building (where spawn and milt are collected) and maturation ponds," Switzer said.

When fish reach the upper weir, they remain in a holding pond until fisheries biologists determine that the females' eggs are ripe enough to be fertilized successfully.

"When the females are 75 percent ripe, it's green light, let's go," Switzer said.

Usually, egg take begins around the second week of October. 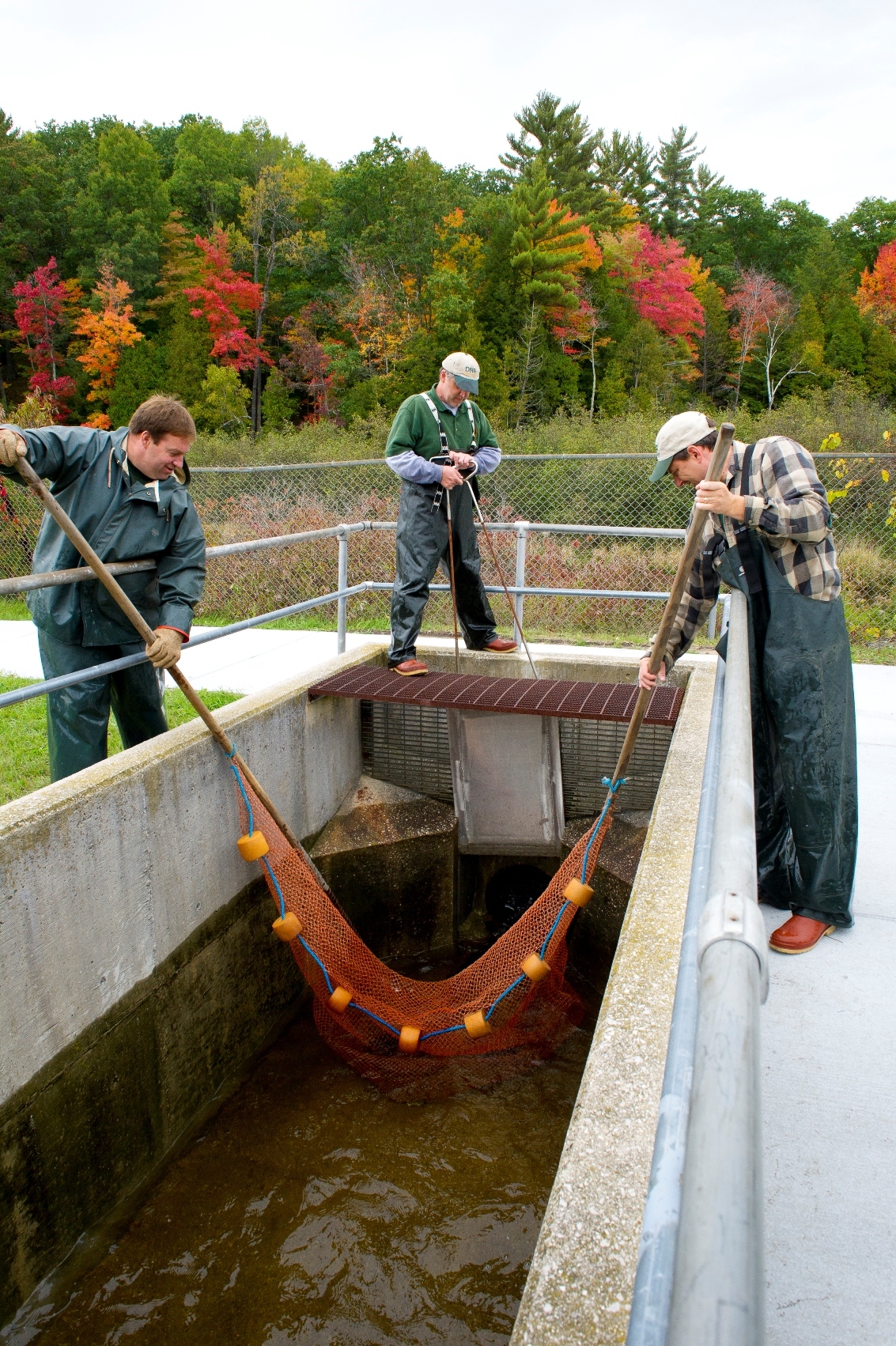 The Swan River facility has been considered a back-up facility for many years, but was used to procure Chinook eggs the last two years when there was an insufficient supply at the Little Manistee.

There's a weir at the Boardman River that is not used for egg take at all.

"We get plenty of people through the Little Manistee, Platte and the Boardman. They're all great places to educate the public and for the public to see us in operation."

There is no public access at Swan River; the weir is on private property and access is restricted.

The weir at Medusa Creek is strictly a harvest facility. There is no physical facility there, but water is diverted from the creek into a holding pond where the fish collect.

"We can't have all those mature salmon going up a creek that's 2 feet wide running up into the cement plant," Switzer said, though it could be a potential egg-take site in the future if necessary. 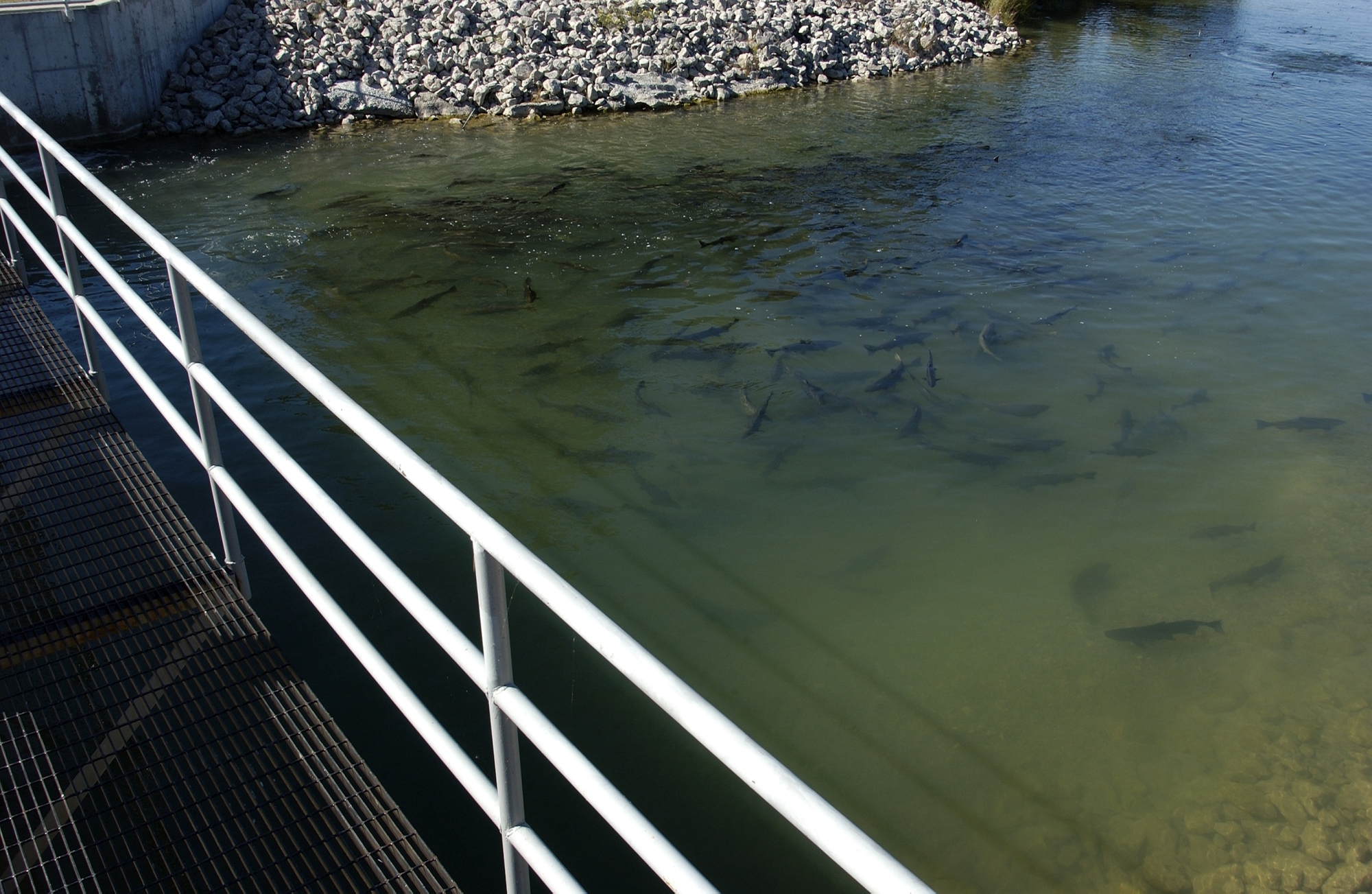 The lower weir at Platte takes about a half day's work for a crew of four people to put it in and to remove it, Switzer said.

"The upper weir takes time," he continued. "There are basically big steel boards that go in the channels in the concrete at the weir. We install it and take it out in stages so they don't completely deplete downstream flow in installation and not let a big slug of water downstream all at once during removal.

Switzer said the DNR usually installs the upper weir around Sept. 1 and it stays in place until July 15 "because we also use it to block steelhead and sea lamprey. Lamprey cannot get past it. It is an effective lamprey barrier."

Sea lamprey, an invasive fish that preys on native lake trout, spawn in streams like the salmon and steelhead do.

Weirs allow the DNR to herd fish into one place and process them in a timely matter. Without weirs, DNR staff would be reduced to using nets or electro-fishing gear to collect fish. The process would be longer, more expensive and not nearly as effective.

The DNR does not operate any weirs in the Upper Peninsula.

Egg take at the Platte River occurs throughout October. It's a popular school group and tourist attraction as it allows the public to see how the operation works. At the Little Manistee River, visitors are welcome during the fall Chinook and spring steelhead egg takes.

Visitors can learn about salmon biology, how weirs and fish ladders work, invasive species, state fish hatcheries, and the DNR's annual egg-collection efforts and their impact on Michigan's fisheries.

To learn more about how the DNR manages Michigan's fisheries, visit www.michigan.gov/fishing.

Check out previous Showcasing the DNR stories and subscribe to upcoming articles at www.michigan.gov/dnrstories.

Eggs: Eggs are removed from a salmon at the Swan River weir in Presque Isle County.

Fish: Salmon are being processed through the Platte River weir in Benzie County.

Salmon: Salmon stage in the Swan River below the weir.

Scoop: A Michigan Department of Natural Resources worker scoops salmon eggs into a container at the Platte River weir.

Weir: The weir on the Little Manistee River in Manistee County is shown.