You have reached the cached page for https://www.amazon.com/Home-Range-Alan-Menken/dp/B0001IXTMC
Below is a snapshot of the Web page as it appeared on 2/5/2021 (the last time our crawler visited it). This is the version of the page that was used for ranking your search results. The page may have changed since we last cached it. To see what might have changed (without the highlights), go to the current page.
You searched for: home on the range movie soundtrack We have highlighted matching words that appear in the page below.
Bing is not responsible for the content of this page.
Alan Menken - Home on the Range - Amazon.com Music 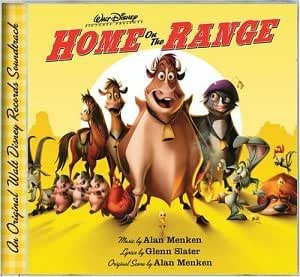 Save with Used - Good
$11.52
FREE Shipping on orders over $25.00 shipped by Amazon.
Arrives: Thursday, Feb 11
Ships from: Amazon
Sold by: Jenson Books Inc

Composer/producer Alan Menken (Beauty and the Beast, The Little Mermaid, etc.) has already lassoed eight Oscars in his run as a Disney hit-deliverer, and here he rustles up several good reasons for the Academy to offer him one more. Of the eight non-score songs on offer, three are knock-your-spurs-off dazzlers: k.d. lang pours her perfect pitch all over "Little Patch of Heaven," Bonnie Raitt breaks hearts with the fragile piano ballad "Will the Sun Ever Shine Again," and Tim McGraw tips a twangy hat to friendship on "Wherever the Trail May Lead." The Beu Sisters' version of "Anytime You Need a Friend," also performed as a final track by Menken, satisfies musical sweet teeth--it's the sort of song that's practically mandatory on a Disney record these days--but its slightness doesn't detract from the at times rootin'-tootin', at times pure-prairie-pretty mood. Listeners of all ages, saddle up. --Tammy La Gorce

4.6 out of 5 stars
4.6 out of 5
40 global ratings
How are ratings calculated?
To calculate the overall star rating and percentage breakdown by star, we don’t use a simple average. Instead, our system considers things like how recent a review is and if the reviewer bought the item on Amazon. It also analyzes reviews to verify trustworthiness.
Top reviews

Shane Lindsay, Author of Arabian Heist
4.0 out of 5 stars Way Better Than The Movie
Reviewed in the United States on August 18, 2011
Verified Purchase
The movie, which is a misguided mess dealing with dairy cows in the Old West, never deserved this awesome Disney soundtrack. Put them in even a mediocre animated effort, and they would have become classics along with the songs of Cinderella, Peter Pan, and Alice in Wonderland. As it is, nobody remembers the bouncy Little Patch of Heaven or the hilarious Yodel-Adle-Eedle-Idle-Oo song, sung by the main villain.

The songs are underpinned by country influences, but seem way more like old fashioned cowboy songs than anything that might pass for pop music today. More than half the album is score, and while it's decent, the songs by Alan Menken outshine them all. The main ballad ("Will the Sun Ever Shine Again?") has a breadth of emotion that should never been placed in the same film with Roseanne Barr.

Morgan
5.0 out of 5 stars I love this CD.
Reviewed in the United States on August 12, 2012
Verified Purchase
The story was about three cows trying to stop a rustler from stealing the herd and making them lose their farm. The music is very old western style and a lot of fun to listne to. I put it on my Iphone for fun. The Cow Wrestler sings a yodeling song that is really fun and well done. When I am crabby or waiting in the dentist's office I put this on to raise my spirits, and it works. It's just good old western style fun.
Read more
Helpful
Report abuse

Rose TylerTop Contributor: Action Figures
5.0 out of 5 stars He loves this!
Reviewed in the United States on July 25, 2016
Verified Purchase
My brother is who mostly downloaded this for. He loves this movie and the songs, especially (You ain't) Home on the Range and it's reprise. May buy again as a CD as a gift for him.
Read more
Helpful
Report abuse

Richard A.
5.0 out of 5 stars Five Stars
Reviewed in the United States on May 2, 2018
Verified Purchase
Love the service. Thank you.
Read more
Helpful
Report abuse

AEH
4.0 out of 5 stars CD arrived promptly in good condition
Reviewed in the United States on May 6, 2017
Verified Purchase
Great music. Both the grandkids and I play it often. The performers that sang them have beautiful vocal ranges. You would enjoy it even if you don't generally listen to country music.
Read more
Helpful
Report abuse

Matthew F. Hudson
5.0 out of 5 stars Great family movie!
Reviewed in the United States on October 13, 2016
Verified Purchase
We love this movie! It's always a favorite!!
Read more
One person found this helpful
Helpful
Report abuse

William Hall
4.0 out of 5 stars Disney film with nice songs.
Reviewed in the United Kingdom on December 4, 2018
Verified Purchase
This almost forgotten score features six of Alan Menken's best songs,with very good lyrics by Glenn Slater. The singers, who include k d lang, get the 'country' feel well and the first section of the CD is enjoyable. The rest is very conventional film music, well played however. If, like me, you collect CDs of musicals of both stage and screen, you'll want this, provided of course you don't have to pay an exorbitant price.
Read more
Report abuse

GovindaDayal
4.0 out of 5 stars Immer nur an Menken denken
Reviewed in Germany on March 19, 2013
Verified Purchase
What to say? I am an Alan Menken fan, thus, the where and when of buying this OST, was a mere matter of time.
What to say about the OST? Honestly, as far as my opinion is concerned, it ain't got the qualties of a Mermaid in desperate love, or of a hungry thief with a heart full of hope. But it's got singing cows, yodels in the air, and a whiff of the wild west which is hidden in the warm breeze below a blue sky above a dusty ground.