You have reached the cached page for https://www.amazon.com/Hole-Ground-DVD/dp/B07R4WVJ9S
Below is a snapshot of the Web page as it appeared on 7/4/2020 (the last time our crawler visited it). This is the version of the page that was used for ranking your search results. The page may have changed since we last cached it. To see what might have changed (without the highlights), go to the current page.
You searched for: hole in the ground movie We have highlighted matching words that appear in the page below.
Bing is not responsible for the content of this page.
Amazon.com: The Hole in the Ground (DVD) [2019]: Movies & TV 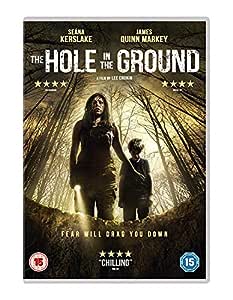 Format: DVD
4.1 out of 5 stars 20 ratings
Playback Region 2 :This will not play on most DVD players sold in the U.S., U.S. Territories, Canada, and Bermuda. See other DVD options under “Other Formats & Versions”. Learn more about DVD region specifications here

Trying to escape her broken past, Sarah O’Neill (Seána Kerslake) is building a new life on the fringes of a backwood rural town with her young son Chris (James Quinn Markey). A terrifying encounter with a mysterious neighbour shatters her fragile security, throwing Sarah into a spiralling nightmare of paranoia and mistrust, as she tries to uncover if the disturbing changes in her little boy are connected to an ominous sinkhole buried deep in the forest that borders their home. Bonus Feature Inside the Hole in the Ground

4.1 out of 5 stars
4.1 out of 5
20 customer ratings
How does Amazon calculate star ratings?
Amazon calculates a product’s star ratings based on a machine learned model instead of a raw data average. The model takes into account factors including the age of a rating, whether the ratings are from verified purchasers, and factors that establish reviewer trustworthiness.

Flapjack
1.0 out of 5 stars A weak storyline, mediocre acting and very poor filming - hardly worthy of one star
Reviewed in the United Kingdom on December 27, 2019
Verified Purchase
I usually enjoy horror films and, having read the reviews of The Hole in the Ground, I couldn't wait to watch it. What a MASSIVE disappointment it turned out to be. To start off with, the cast consisted mainly of only two actors (a mother and her young son) and the storyline was extremely weak - in fact you didn't need to watch the movie as the entire story was printed on the cover. Mother and lad move into a new house on the edge of a forest, which happens to have an enormous sink hole in the ground. Son starts to exhibit strange behaviour, which gets more sadistic as the film progresses, and mother is convinced the sink hole is in some way responsible. Eventually she climbs down the hole to find out what's going on, but as virtually the entire movie was filmed almost in total darkness, it's impossible to work out what (if anything) she discovers. And that's it - yes, really, that is it. There was no satisfactory ending or explanation, as the next thing we see is a short scene of the son back at school and behaving perfectly normally, and then the film comes to an end. Take it from me, as a lifelong horror-movie fan - don't waste your money !
Read more
4 people found this helpful
Helpful
Sending feedback...
Thank you for your feedback.
Sorry, we failed to record your vote. Please try again
Report abuse

Caz Z
5.0 out of 5 stars Truly one of the best...
Reviewed in the United Kingdom on August 6, 2019
Verified Purchase
This is truly one of the best horror movies. Gripping and sh**t scary at the same time. Lee Cronin is the best.
Read more
2 people found this helpful
Helpful
Sending feedback...
Thank you for your feedback.
Sorry, we failed to record your vote. Please try again
Report abuse

David
5.0 out of 5 stars Excellent movie
Reviewed in the United Kingdom on November 2, 2019
Verified Purchase
Excellent service and an excellent movie, very happy :-)
Read more
One person found this helpful
Helpful
Sending feedback...
Thank you for your feedback.
Sorry, we failed to record your vote. Please try again
Report abuse

Amazon Customer
4.0 out of 5 stars Worth buying good movie
Reviewed in the United Kingdom on November 23, 2019
Verified Purchase
Another great uk/Irish movie, unusual story, one of the better scarey kid movies, better than the boy, worth getting.
Read more
Helpful
Sending feedback...
Thank you for your feedback.
Sorry, we failed to record your vote. Please try again
Report abuse

Cheryl Osborne
5.0 out of 5 stars 5 star rating.
Reviewed in the United Kingdom on January 18, 2020
Verified Purchase
Great film with a good story to it recommended to anyone to watch it.
Read more
Helpful
Sending feedback...
Thank you for your feedback.
Sorry, we failed to record your vote. Please try again
Report abuse