You have reached the cached page for https://www.amazon.ca/Hesher-Natalie-Portman/dp/B0057GUGHE
Below is a snapshot of the Web page as it appeared on 11/16/2020 (the last time our crawler visited it). This is the version of the page that was used for ranking your search results. The page may have changed since we last cached it. To see what might have changed (without the highlights), go to the current page.
You searched for: hesher movie release date We have highlighted matching words that appear in the page below.
Bing is not responsible for the content of this page.
Hesher: Amazon.ca: Natalie Portman, Joseph Gordon-Levitt, Rainn Wilson, Spencer Susser: DVD 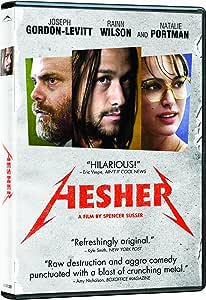 Loud music. Pornography. Lighting fires. These are a few of Hesher’s favorite things. And they are what Hesher (Joseph Gordon-Levitt) brings into the lives of TJ (Devin Brochu) and his father Paul (Rainn Wilson) when he takes up residence in the garage uninvited. Grief stricken by the loss of TJ’s mother, Paul can’t muster the strength to evict the strange squatter and soon the long-haired, ta ttooed Hesher becomes a fixture in the household. Like a force of nature, Hesher’s anarchy shakes the family out of their grief and helps them embrace life once more.

As the title character in Hesher, Joseph Gordon-Levitt wears a grungy fright wig and anarchic death-metal attitude to match. He's worlds away from the suave, immaculately groomed covert operative he played in Inception. But what's consistent in both performances and the thing that gives the über-indie and perhaps overly nihilistic Hesher its punch is Gordon-Levitt's sleek, leonine physicality. Hesher is a mysterious, violent, rude, yet affectingly empathetic drifter who appears in the life of 13-year-old T.J., his depressed father, and ailing grandmother, all of whom are grieving the recent death of the boy's mother. Hesher drives a beat-up black van and sleeps in vacant houses (until he moves uninvited into T.J.'s garage), popping in and out of the action at random and seemingly just to bring more chaos into the life of T.J. and his family. Whether Hesher is what the family needs to unscrew itself from the funk of extreme dysfunction caused by their communal tragedy is something first-time writer-director Spencer Susser tries hard to work out, and not always with complete success. It's a tough and very messy narrative that runs dangerously close to mawkishness, but for the vicious outbursts of brutality, aggression, and deep-seated emotional pain lying just beneath everyone's surface. Hesher is the catalyst, and fortunately Gordon-Levitt's physical grace is extraordinarily compelling as he pushes and punishes his lithe body in complete commitment to the role. This is a severely damaged soul who's probably beyond redemption himself, but understands that he still has something to give that might be of aid to someone else. As the primary beneficiary of the salvation on offer, Devin Brochu is an impressive little brother-like match as T.J., even as he's constantly exposed to the physical danger that's a by-product of being in proximity to Hesher (kudos to the tiny stunt double who gets tossed around like a rag doll). The rest of the cast do their best to keep up with the bedlam. Rainn Wilson is stretching some little-used actorly muscles as the near-catatonic dad for whom something must change, and Natalie Portman looking positively frumpy as a down-and-out ragamuffin who crosses paths with both T.J. and Hesher seems also to be trying to put a shine on her indie cred. Piper Laurie's turn as the obese, uncomprehending grandmother is a poignant peak in her long career and a character that's integral to the changes everyone else experiences, most especially Hesher himself. --Ted Fry

4.0 out of 5 stars
4 out of 5
71 global ratings
How are ratings calculated?
To calculate the overall star rating and percentage breakdown by star, we don’t use a simple average. Instead, our system considers things like how recent a review is and if the reviewer bought the item on Amazon. It also analyzes reviews to verify trustworthiness.
Top reviews

David L
5.0 out of 5 stars Great 'Flic' GREAT actors & Music!
Reviewed in Canada on October 19, 2019
Verified Purchase
Wow, what range has Joseph got, basically a 'Bio' on the way (never met but from video recordings made) on 'Cliff Burton', who needed a well deserved movie on his life, PROFESSIONALLY! All star cast also, an when look at who played the Grandmother(of 'someone', you'll be shocked! Again! Part of an All star cast And if a fan of the music 'genre', you'll LOVE this movie!
Read more
Helpful
Comment Report abuse

J.T.
1.0 out of 5 stars waste of money
Reviewed in Canada on August 7, 2018
Verified Purchase
the film made no sense and after watching it am still in the dark as to what it was. the boy was very good trying to deal with his loss but what hesher was doing there is senseless and does nothing for the film except distract and confuse the issue,if the film was free it would cost to much .DON"T WASTE YOUR MONEY OR TIME.
Read more
Helpful
Comment Report abuse

Jesse Robson
5.0 out of 5 stars Great movie with a twist of dark
Reviewed in Canada on October 14, 2020
Verified Purchase
It wasn't too dark. Just a little. Could've used a tad more Metallica, but overall a great film.
Read more
Helpful
Comment Report abuse

Brownstone
3.0 out of 5 stars why did i get this
Reviewed in Canada on February 20, 2013
Verified Purchase
I have no idea why I bought this. Maybe because I am a metallica fan but other then the fact that Joseph Gordon-Levitt plays a metal head who loves Metallica which I connected with the movie was just ok to me. Mild humor, not too much action and kinda slow moving at parts. I have seen this movie a few times before and basically i came up with the idea that it isn't the kind of movie you want to watch over and over and over again. Not worthy of buying but definately worth a watch.
Read more
One person found this helpful
Helpful
Comment Report abuse

Mitch
1.0 out of 5 stars Terrible
Reviewed in Canada on April 5, 2013
Verified Purchase
This was the worst movie I've ever seen in a long time. Very slow and boring, bad acting (except for Joseph).
Read more
Helpful
Comment Report abuse

The Movie Guy
HALL OF FAMETOP 1000 REVIEWER
3.0 out of 5 stars NOW YOU GOT MORE CHANNELS...
Reviewed in Canada on May 27, 2016
The story centers around TJ after his mother has died as he and his dad attempt to get their life back to normal. TJ is a bad luck kid who is not only depressed, but bullied. Hesher, an anarchist, bullies his way into TJ's life and shows up at improbable times, almost as an imaginary alter ego. The writer attempts to shock the audience with the audacity of Hesher's acts as well as his crudeness, which I thought didn't work as well...especially the idiotic scene where he is talking about granny rapers, or his "perverted metaphor." The inability of the author to create audacity without constant crudeness shows a weakness.

The actors did an excellent job. There were many scenes you sit and ask yourself, in a good way, "What just happened here?" Or "What the heck is he doing now?" Life as usual falls to its least common denominator as the grief stricken family starts to imitate the anarchist ways, which seem to lack consequences in this film. Parts of the film were excellently done, while other scenes were weak. I suppose the ending of the film was supposed to make us feel good about the whole thing, but it doesn't compensate enough. Personally I think that if they toned down the crudeness of Hesher and put in Zack Garifalakis in that role the movie could have been a box office smash.

Normally I love these indie style quirky comedies, perhaps I have seen too many of them to enjoy this one to its fullest. And what the heck was Natalie Portman doing in this film?

Carl Adams
5.0 out of 5 stars Off the wall classic.
Reviewed in the United Kingdom on August 13, 2013
Verified Purchase
I like films that don't fit into easy definable boxes , that are a bit off the wall , that combine many things drama , humor ,sadness etc etc. This is such a movie. Heartfelt and touching , odd and off the wall , funny and sad. If you are looking for some thing other than another boring billion pound action blockbuster check this out . Brilliantly acted , the entire cast are first class particularly Piper Laurie who shines as the kind hearted grandma. I wont tell you the plot , watch it then file next to other great films such as Secretary , American Beauty and Ghost World that you'll want to revisit as the years roll by. Go on take a chance.
Read more
4 people found this helpful
Report abuse

Anonymous-
5.0 out of 5 stars A Must Have In The Joseph-Gordon Levitt Collection
Reviewed in the United Kingdom on February 13, 2013
Verified Purchase
Originally, my sole interest for watching this movie was that Joseph Gordon-Levitt starred in it. And once again, his performance was spectacular. And so was the rest of the cast in a story of a dangerously, aggressively chaotic metal-head squatter moving in on a grieving family, uprooting the lives of all and making them deal with their lot.

Alison W
5.0 out of 5 stars Great Film
Reviewed in the United Kingdom on December 22, 2013
Verified Purchase
An interesting film with good non-stock characters and Metallica playing throughout. Great casting (two of my favourite actors actually) and more metal than ya ma's kettle. I would recommend this.
Read more
2 people found this helpful
Report abuse

Jeff
4.0 out of 5 stars Excellent movie.
Reviewed in the United Kingdom on June 12, 2015
Verified Purchase
Excellent movie....covers the full range of emotions, great dialogue and acting throughout and with a classic metal soundtrack to top it off
Read more
One person found this helpful
Report abuse
See all reviews
Fast, FREE delivery, video streaming, music, and much more
Prime members enjoy Free Two-Day Shipping, Free Same-Day or One-Day Delivery to select areas, Prime Video, Prime Music, Prime Reading, and more.
> Get started
Back to top
Get to Know Us
Make Money with Us
Amazon Payment Products
Let Us Help You
EnglishChoose a language for shopping. CanadaChoose a country/region for shopping.
© 2008-2020, Amazon.com, Inc. or its affiliates