You have reached the cached page for https://www.amazon.com/Hesher-DVD/dp/B006B95SRE
Below is a snapshot of the Web page as it appeared on 4/24/2021 (the last time our crawler visited it). This is the version of the page that was used for ranking your search results. The page may have changed since we last cached it. To see what might have changed (without the highlights), go to the current page.
You searched for: hesher movie dvd release We have highlighted matching words that appear in the page below.
Bing is not responsible for the content of this page.
Amazon.com: Hesher [DVD]: Movies & TV 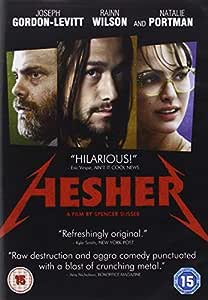 Format: DVD
4.6 out of 5 stars 534 ratings
IMDb7.0/10.0
See More
Playback Region 2 :This will not play on most DVD players sold in the U.S., U.S. Territories, Canada, and Bermuda. See other DVD options under “Other Formats & Versions”. Learn more about DVD region specifications here

Spencer Susser writes and directs this darkly comic drama starring Joseph Gordon-Levitt, Rainn Wilson and Natalie Portman. After his mother is killed in a car crash, T.J. (Devin Brochu) falls into a deep depression. Living with his sleeping pill-addicted father, Paul (Wilson), and absent-minded grandmother (Piper Laurie), while at the same time being bullied relentlessly at school, he soon withdraws into a state of extreme social isolation alleviated only by his crush on bespectacled supermarket check-out girl Nicole (Portman). However, things change dramatically for T.J. when an unlikely ally comes into his life in the form of Hesher (Joseph Gordon-Levitt), a nihilistic, foul-mouthed, heavy metal-loving pyromaniac squatting in a nearby abandoned building.

4.6 out of 5 stars
4.6 out of 5
534 global ratings
How are ratings calculated?
To calculate the overall star rating and percentage breakdown by star, we don’t use a simple average. Instead, our system considers things like how recent a review is and if the reviewer bought the item on Amazon. It also analyzes reviews to verify trustworthiness.
Top reviews

And that's where the writing fails: for most of this movie, I didn't really see Hesher and TJ's dad as really all that different, because it's not until the last 10 minutes of the movie that the viewer gets a glimpse into TJ's life before his mom's death. Having never assumed that TJ had previously been living in a kind of Leave it to Beaver fantasy world, I had no grasp on just how much his life had changed since her death -- I could only tell that he and his father were very sad and angry. Moreover, Hesher just seemed like another in a string of oddities in an otherwise decentralized life. That means that rather than feeling a sense of momentum and culmination as the movie climaxes, I was left wondering why the movie's close was presented with all these grandiose emotions I just wasn't feeling and why I hadn't laughed more.

Ultimately, this movie would have been stronger if the writer hadn't tried to cram all this self-serious, hyperemotional content into it or if the writing created clearer distinctions between TJ's life before and after Hesher's arrival.
Read more
6 people found this helpful
Helpful
Report abuse

Mister Big
5.0 out of 5 stars 2 of Hollywood's biggest stars in a tiny, independent film that literally gives the middle finger to Hollywood.
Reviewed in the United States on January 7, 2018
Verified Purchase
I saw this when it was in theaters seven times!!! I kept bringing friends to see it & it's become one of my all time favorite movies.
It's two of Hollywood's biggest stars in a very small & independent film that literally gives the middle finger to mainstream Hollywood garbage.
It's dark & sad and features an unlikely comic/tragic hero who rescues three drowning souls by reminding them, in his own way, that life is for the living. While not overtly apparent, Hesher has a deep philosophical message for the world that will likely be lost on the typical popcorn and Pepsi guzzling movie crowd who are willing to happily toss away $15 on another procedural poo fest like a Fast & Furious or SAW movie.

Hesher's solid foundation, as with any movie, is it's great script. Top that with great acting (maybe JGLs best performance ever).
Hesher will make you cry and laugh and in the end will leave you with the certainty that you've just seen something,
but leaves it to you to figure out exactly what that is. And that's EXACTLY what good art should do.
Hesher is not for the masses...it's for the intelligent. Oh, and....METALLICA!!!!!!!!!!!!!!
Read more
3 people found this helpful
Helpful
Report abuse

Herman Autore
3.0 out of 5 stars The emotional equivalent of Sharknado
Reviewed in the United States on November 28, 2017
Verified Purchase
This movie is the emotional equivalent of Sharknado. At some points the emotional depth is enough that you think this is a really good movie, sometimes the humor is dark enough you think this is something you'll tell your friends about, but towards the end you realize that the people who made this movie didn't know what the frack they were doing. It's like they had two competing teams making the same movie. One was a real Hollywood team and the other is a team of 4-chan-posting, web-trolling high school teenagers. Then at some point the scripts and editing got switched and they end up with an incoherent mix of meaningful philosophy and stupid jokes. It's not a comedy (not even a dark comedy), and it's not a drama. It's just a bad movie. This movie just barely made 3 stars, only because I stuck around long enough to see the movie's last scene, which was funny in a very silly, stupid, teenage way. The movie is definitely a B movie, even though Portman and Gordon-Levitt are in it. By the way, Gordon-Levitt and Portman were HORRIBLE actors. Especially Gordon-Levitt. I mean HORRIBLE. JESUS!

Spoiler alert. Okay, my real beef is the funeral scene. When the kid and dad join Hesher in "walking with grandma" the movie loses all coherence. That scene is so stupid it makes the movie lose all credibility. That scene tips the movie from introspective dark humor to Ben Stiller-style non-sensical lampooning. That scene alone made it go from 5 to 3 stars.
Read more
2 people found this helpful
Helpful
Report abuse

XXnotXY
1.0 out of 5 stars Filth, disgusting.Sign of DEGENERATE writers. Extreme abuse to kid. GARBAGE. Ashamed of J.G.LEVITT
Reviewed in the United States on April 23, 2021
Verified Purchase
SPOILER ALERT... why ? cuz NO NEED watching it.
A class A+ male late teen sadist narcissist abuses a young boy, and anyone else, invades boys home, his life, his last bit of safety, and kills boys grandmother with OD on too much medical 420 and stress she's not used to... w/o anyone protecting him from this maniac who the writers add a faux psuedo soft side JUST ENOUGH to make him not a serial killer. WORST movie I've seen in a VERY long time. Did anyone benefit for the maniac's weird abusive "kindess"? NO. Grandma DIED. Dad n son got back together after so much trauma ONCE the degenerate abuser with foulest mouth ever in front of a kid under 10. GARBAGE
Read more
Helpful
Report abuse
See all reviews

Carl Adams
5.0 out of 5 stars Off the wall classic.
Reviewed in the United Kingdom on August 13, 2013
Verified Purchase
I like films that don't fit into easy definable boxes , that are a bit off the wall , that combine many things drama , humor ,sadness etc etc. This is such a movie. Heartfelt and touching , odd and off the wall , funny and sad. If you are looking for some thing other than another boring billion pound action blockbuster check this out . Brilliantly acted , the entire cast are first class particularly Piper Laurie who shines as the kind hearted grandma. I wont tell you the plot , watch it then file next to other great films such as Secretary , American Beauty and Ghost World that you'll want to revisit as the years roll by. Go on take a chance.
Read more
4 people found this helpful
Report abuse

Anonymous-
5.0 out of 5 stars A Must Have In The Joseph-Gordon Levitt Collection
Reviewed in the United Kingdom on February 13, 2013
Verified Purchase
Originally, my sole interest for watching this movie was that Joseph Gordon-Levitt starred in it. And once again, his performance was spectacular. And so was the rest of the cast in a story of a dangerously, aggressively chaotic metal-head squatter moving in on a grieving family, uprooting the lives of all and making them deal with their lot.

Alison W
5.0 out of 5 stars Great Film
Reviewed in the United Kingdom on December 22, 2013
Verified Purchase
An interesting film with good non-stock characters and Metallica playing throughout. Great casting (two of my favourite actors actually) and more metal than ya ma's kettle. I would recommend this.
Read more
2 people found this helpful
Report abuse

Jeff
4.0 out of 5 stars Excellent movie.
Reviewed in the United Kingdom on June 12, 2015
Verified Purchase
Excellent movie....covers the full range of emotions, great dialogue and acting throughout and with a classic metal soundtrack to top it off
Read more
One person found this helpful
Report abuse
See all reviews

Deals related to this item

See all deals
Page 1 of 1 Start overPage 1 of 1
Previous page
Next page
Back to top
Get to Know Us
Make Money with Us
Amazon Payment Products
Let Us Help You
EnglishChoose a language for shopping. United StatesChoose a country/region for shopping.
© 1996-2021, Amazon.com, Inc. or its affiliates