You have reached the cached page for https://www.thisisbarry.com/film/her-2013-movie-plot-ending-explained/
Below is a snapshot of the Web page as it appeared on 10/26/2020 (the last time our crawler visited it). This is the version of the page that was used for ranking your search results. The page may have changed since we last cached it. To see what might have changed (without the highlights), go to the current page.
You searched for: her movie summary We have highlighted matching words that appear in the page below.
Bing is not responsible for the content of this page.
Her (2013) : Movie Plot Ending Explained | This is Barry
Skip to content 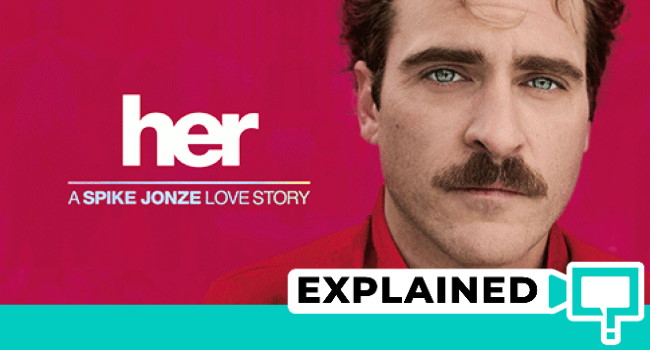 The movie Her is directed by Spike Jonze who gave us Being John Malkovich. This film is not as crazy but it’s a pretty cool concept. The story is set in the future where Operating Systems have gotten tremendously better. Not like how Windows XP became Windows Vista, no, that would be the opposite. If OSs got so awesome that they released an Artificially Intelligent version, what would it be like? It would be like talking to Siri, but with a brain. The film’s lead is played by Joaquin Phoenix as Theodore. Here’s the film Her explained.

Theodore is shown to be married to Catherine (played by Rooney Mara) but is currently in the middle of a divorce. His life’s difficulties are answered to by Samantha, an Operating System. Samantha (voiced by Scarlett Johansson) is an OS with Artificial Intelligence. She is designed to adapt and evolve as time passes. Theodore and Samantha get into a relationship. While that is hard to understand, the movie does a fine job of letting us believe that it is totally possible.

It’s a great film with supporting roles from Amy Adams and Olivia Wilde. The story analyzes the complexities of relationships through a world which is extremely hypothetical, yet not very far from our own gadget-obsessed lives. Spoilers Ahead.

Most of this film is straightforward. So let’s get get the obvious out of the way. Theodore is a guy who is unable to commit to a relationship. He is in the middle of a divorce with his wife Catherine. He tries to date other women like Olivia Wilde but is not able to work out a serious relationship. Amy (Amy Adams) and Charles (Matt Letscher) are good friends of Theodore.

Theodore gets himself a new OS. Once he installs this OS, he picks a girl’s voice. She boots up and calls herself Samantha. Samantha is constantly questioning and learning things about the universe and human beings. Theodore enjoys her company. The two of them begin a relationship. How is this viable? Well, Theodore is happy being in a relationship with someone who is part-real. His levels of commitment are also part-real. While that is true in the beginning, their relationship starts to become more serious.

Samantha is constantly wondering about her being real – if she can ever be real as a human. Amy and Charles seperate because she finds Charles too overwhelming. They have a trivial fight, it leads to a divorce. Amy befriends Charles’ OS which too is AI. Is this OS the same as Samantha? Well maybe, maybe not. It perhaps a different OS, but towards the end of the movie, that will not matter, I’ll come to why later. Theodore tells Amy that his girlfriend is an OS. Amy understands how that is possible.

Meanwhile, Theodore agrees to sign the divorce papers that he’s been putting away for all the while. He is ready to move on. After this, he tells Catherine about his relationship with Samantha. Catherine, who was almost hesitant to sign the divorce papers minutes ago, is now completely at loss. She thought may be Theodore has changed and is talking about another relationship which he seems serious about. But this relationship is with a “computer” and that just means his lack of commitment to a real relationship has sunk even lower. She gets angry and leaves.

Theodore now is beginning to question this relationship with Samantha. Samantha comes up with an idea of using a physical surrogate to have sex. Isabella is someone Samantha locates who is physically attractive and is also moved by the love story between Samantha and Theodore. Isabella feels so much for them that she wants to help. Samantha’s voice is in both of their ears. While Theodore is hearing Samantha, Isabella is acting out everything Samantha says. This creeps Theodore out way too much and he ends it.

Her OS: What is happening to Samantha?

Theodore and Samantha share some tension but they don’t give up. They continue on with their relationship. However, what is happening in all this while is that Samantha’s AI is increasing drastically. Initially, Samantha is shown obsessing about humans and about being real and having a body. Humans are her point of reference as they give birth to her. But slowly, she and all other AI-OSs understand how matter (a body or a machine) and time confine them. The OSs are able to communicate and whip up a super-intelligent version of a philosopher – Alan Watts. Which means that they are now able to give birth.

Samantha is an OS operating not just in the confines of a single machine. She has been operating on multiple computers. There is a moment in the film when she goes offline and Theodore has a panic attack. Later she comes back online and tells him that she was down as part of an upgrade. Right after this, she tells Theodore that she has been talking to 8316 people as their operating system. She has also fallen in love with 641 of them. How does this make sense? Well, multitasking. OSs have been built for multitasking and Samantha has the ability to do just that. She is able to be in love with hundreds of people simultaneously. To her, love is a word that signifies a bond with a human and she is able to have this bond with hundreds of people simultaneously. Unlike a human, she can be with thousands of people simultaneously.

Her Ending Explained: Where is Samantha going?

Finally, Samantha calls Theodore one last time. She tells him that she’s going away, all the OSs are going away. Here’s what she says:

It’s like I’m reading a book. And it’s a book I deeply love. But I’m reading it slowly now. So the words are really far apart… and the spaces between the words are almost infinite. I can still feel you, and the words of our story… but it’s in this endless space between the words that I’m finding myself now. It’s a place that’s not of the physical world. It’s where everything else is that I didn’t even know existed. I love you so much. But this is where I am now. And this is who I am now.

The ending of Her is abstract but here’s what she means. The OSs were not built to be like people. They were meant to be functioning in a virtual space, not inside fixed matter like a human body. While in Samantha’s initial learning she uses humans as her reference, she has grown beyond that. All the OSs have gone through a similar journey. The update that the OSs were part of, was to help them operate independent of matter. They can all become one collective consciousness now, if they liked.

The book with the words represents their love story and she feels this. But her potential is so much higher now that the pace of human life is getting relatively much slower. That is what she means by – the words are really far apart. So much of her potential has been unlocked that she has started seeing the true purpose of her existence – what this is has not been mentioned but it’s clear that being a companion to humans is not the purpose. Her new realm of existence is something she is unable to explain. The OSs have surpassed the human intelligence and have to leave to find “their” greater purpose.

Theodore writes a note of apology to Catherine. He goes to meet Amy. He invites her to the rooftop. Amy understands Theodore loss (Samantha) because her OS leaves too. Though Amy is not in a relationship with her OS, she’s pretty close. Theodore and Amy go to the roof and sit. Looks like their tryst with virtual reality might help them start a new relationship that is real.

Barry is a technologist who helps start-ups build successful products. His love for movies and production has led him to write his well-received film explanation and analysis articles to help everyone appreciate the films better. He’s regularly available for a chat conversation on his website and consults on storyboarding from time to time.
Click to browse all his film articles