You have reached the cached page for https://www.harmonicajamz.com/top-harmonica-solos-best/
Below is a snapshot of the Web page as it appeared on 6/19/2021 (the last time our crawler visited it). This is the version of the page that was used for ranking your search results. The page may have changed since we last cached it. To see what might have changed (without the highlights), go to the current page.
You searched for: harmonica shorts #30 - rick fenn young and cheryl hines We have highlighted matching words that appear in the page below.
Bing is not responsible for the content of this page.
Harmonica Solos – The Top 10 Enriching Solos In Rock History | Harmonica Jamz
2uLT0L

Harmonicas are such amazing instruments. In such a tiny package it can produce riffs and full solos that range from very upbeat and happy (like the ones in Long Train Runnin’, Hook…) to ones that touch you deeply and give the whole song a sad vibe even if they only last for ten seconds and are made of six notes. (He Ain’t Heavy He’s My Brother)

I sat down and chose the top enriching solos in classic rock history. Listen to these solos and try to soak in on the use of techniques such as: Getting artsy with my Hohner Blues Harp and a good Nikon.

Listen closely for the solos and technique and duplicate it yourself in your own solos! Harmonicas are relatively easy instruments to imitate and get good on so use this to your advantage.

Harmonicas are used more widely in blues music (listen to some blues classics on YouTube for more examples of stellar harmonica technique) and there is an abundance of sick harmonica solos in blues music, but today we will focus on classic rock which is also more familiar, accessible and likable by a wider audience and you will probably know most of the songs I am going to list, which puts the solos fit great in your context of the rest of the song. Enjoy!

* Another thing that happens to be common with all songs here is that they are all exceptional songs by themselves. The harmonica parts lift them up even more. If you don’t know one of them, give it a full listen. Anyway, I will be providing a “cheat sheet” with the exact timing of the solo if you wanna jump straight to it. Do you play guitar? Here are 9 reasons why playing the harmonica is a GREAT idea for you:

Played by guest star Stevie Wonder, the solo starts at 2:48. A great example of a solo that “speaks” and accompanies a dramatic and beautiful typical Elton John song.

It’s performed exclusively on single notes and on the last part you can hear a great example of how to perfectly execute a rise to the high octave area of the harmonica to spice the solo up!

The solo is at the beginning and the end of the song. That’s a pretty simple but very fun and happy solo that can also be performed pretty easily while playing guitar and having the harmonica on a harmonica holder.

I think that most of Dylan’s harmonica solos are pretty generic and usually there’s nothing special about them, but on this one he just hit it.

This harp classic features incredible harmonica jams all along. Watch and learn…

The solo is at the beginning and then in between each of the verses. A beautiful and touching example of a solo that jumps between distant holes and incorporating accurate and beautiful big intervals.

The solo starts at 1:28. Joyful, bluesy, filled with bended notes and catchy phrases shot at us one after the other. If you ever jammed to some blues, you will be able to hear very clearly the 1-5-4 chord progression and the way he solos on top of it!

The solo is at the beginning and also at 3:24 a longer version of that same solo kicks in. In this short 10 seconds intro solo, The Hollies said with the harmonica what so many other musicians could not say in hours of playing.

Unlike the usual folky and happy vibes that the harmonica is associated with, here the harmonica puts the whole song into the saddest mood that made this song one of the most popular funeral songs ever. Apparently…

What is there that’s left to say about this solo that will be new to you… I’ll just shut it.

It is very overdone indeed but there is a reason why this is easily the most recognizable harmonica solo of all times, and definitely a gorgeous song too. If you haven’t yet, pick up a C harmonica and try to play it yourself by ear – it’s not hard at all.

The solo starts at 2:20. Wow! So emotional, so much talent here. This beautiful song from the soundtrack of the movie “Leon” is played on a chromatic harmonica (the harmonica with the button on the side as you can see in the video) and solely on single notes.

On the recorded version there is a slightly different version of this solo that’s also just as good. Btw, there’s a great acoustic version of Sting playing this one on one with his guitarist – see it here.

Check out the Harmonica Jamz method to learn harmonica quickly:

The solo is at the beginning and after each chorus. Here we hear the perfect folky harmonica vibes that this instrument is so well known for, and another one of the most recognized solos of all times, together with Piano Man.

The video below is epic, how Young calls Heart Of Gold “this new song”, and looks for the right harmonica in his pockets. He does have some screw-ups in the performance and the harmonica in the album version sounds way more polished but the video is still great.

It’s performed on a G harmonica and can be reproduced pretty easily using only your ears. The tricky part is nailing it simultaneously with the guitar part when playing both because the rhythms are a bit different… Brilliant song.

Another great harmonica classic you can check out from Neil Young is “My My, Hey Hey“.

Gorgeous. Virtuoso. Flawless technique. Fast. WOW! This amazing solo starts at 2:30 and lasts almost for 40 seconds so enjoy it while you can. Also, Hook is such a wonderful song that not enough people know. More of a “90’s rock” than classic rock but after you will hear the solo you will understand why the exception is made here.

Blues Traveler is an American rock band formed in New Jersey and they have a lot of other great songs with harmonica in them. Their 2nd best-known hit after Hook is Run-Around.

Hope you enjoyed. Do you know of other epic harmonica solos? Share with us in the comments! Thank you for reading.
*Originally posted in February ’15.

Harmonicas are actually the easiest music instrument out there – I developed a super easy method to teach it to anyone, regardless of previous musical background. Check it out here: www.HarmonicaJamz.com 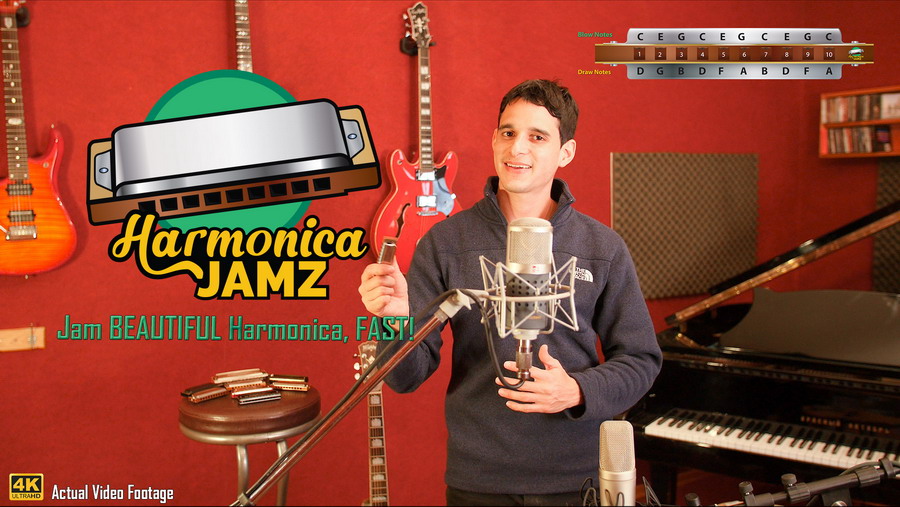 We’ll be able to easily get you ready to jam with other people and play all your favorite songs. Guaranteed to be the world’s #1 harmonica learning plan.

Hey! My name's Cooper, I'm 28 and I'm a musician based in Tel Aviv, working with other artists as a harmonica player, guitarist and pianist. In the last few years, I traveled through four continents while performing and teaching music, and I also run the blog GuitarSongsMasters.com - one of the world's top five most-read guitar blogs. I hope to be helpful to you on your harmonica journeys. Cheers! Join 4700+ Successful Harmonica Jamz students - Play any Song and Jam with Other Musicians