You have reached the cached page for https://spongebob.fandom.com/wiki/Have_You_Seen_This_Snail%3F
Below is a snapshot of the Web page as it appeared on 5/8/2021 (the last time our crawler visited it). This is the version of the page that was used for ranking your search results. The page may have changed since we last cached it. To see what might have changed (without the highlights), go to the current page.
You searched for: harmonica shorts #30 - rick fenn young We have highlighted matching words that appear in the page below.
Bing is not responsible for the content of this page.
Have You Seen This Snail? | Encyclopedia SpongeBobia | Fandom

"Skill Crane"
"Have You Seen This Snail?" is a SpongeBob SquarePants episode from Season 4. In this episode, Gary runs away from home after being neglected by SpongeBob.

In the beginning of the episode, SpongeBob is bringing snail food to his house. When he reaches home, he gets a package containing the Mermaid Man and Barnacle Boy paddle ball set. Also in it is the Dirty Bubble challenge, requiring him to do 29,998,559,671,349 hits with the paddle ball.

He gets so carried away with the game that he forgets to feed Gary and gets angry with him for distracting him from his game when he wants food. SpongeBob ignores Gary saying that he wants to be left alone. For that reason, makes Gary leave SpongeBob and go out of town.

Later, Patrick comes to see SpongeBob, but it turns out he is still trying to complete the Dirty Bubble challenge. SpongeBob realizes that he has not fed Gary yet, but he eventually realizes that Gary is gone as he had been doing the challenge for a week. The two try to find him, and after a while they find a note from Gary stating that he ran away.

Meanwhile, Gary is going through a town faraway from Bikini Bottom, and gets picked up by an old lady who thinks he is another snail. At the same time, SpongeBob tries to look for his snail all over town, but cannot find him.

At the Krusty Krab, SpongeBob is sad that he cannot find Gary until Mr. Krabs unintentionally motivates him to work harder to get Gary back. Him and Patrick start putting up papers and messages all over town in an attempt to do this. Patrick ends up going in a store to look for scented pine cones and he sees Gary. However, he is too distracted by the scented pine cones, so he never tells SpongeBob about seeing Gary.

Gary slowly gets overfed by the old woman, and at some point he sees the papers from SpongeBob telling him to come back. After realizing that the old woman has caused a lot of snails to die from being overfed, he runs away from her and finds SpongeBob desperately wanting him back. They finally reunite and go home together, as the episode ends.

In a press release on November 1, 2005, Nickelodeon officially announced the episode and promoted it as the "Where's Gary" special. According to the network, "it's a sad day in Bikini Bottom when SpongeBob learns that his beloved pet snail Gary is missing and that he may be at fault in the mollusk's disappearance." Marjorie Cohn, Executive Vice President of Development and Original Programming for Nickelodeon, said "kids love their pets and there's certainly some relatability here in the relationship between SpongeBob and Gary -- skewed though it may be[...] It's fun to see Gary express a whole range of emotions using only his signature 'meow.'"[5] 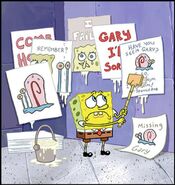 A print advertisement for the episode. 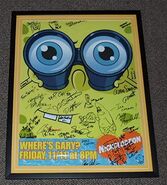 Another print advertisements for the episode.
Add a photo to this gallery

According to the storyboard, SpongeBob was originally going to visit Squidward's house and ask him if he could give him a hand with the bag of snail food.

Retrieved from "https://spongebob.fandom.com/wiki/Have_You_Seen_This_Snail%3F?oldid=3525902"
Community content is available under CC-BY-SA unless otherwise noted.