You have reached the cached page for https://www.rottentomatoes.com/m/happy_death_day
Below is a snapshot of the Web page as it appeared on 1/21/2021 (the last time our crawler visited it). This is the version of the page that was used for ranking your search results. The page may have changed since we last cached it. To see what might have changed (without the highlights), go to the current page.
You searched for: happy death day We have highlighted matching words that appear in the page below.
Bing is not responsible for the content of this page.
Happy Death Day (2017) - Rotten Tomatoes
Home
Top Box Office
Tickets & Showtimes
DVD & Streaming
TV
News 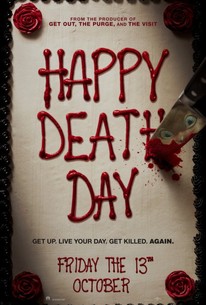 Tree Gelbman is a blissfully self-centered collegian who wakes up on her birthday in the bed of a student named Carter. As the morning goes on, Tree gets the eerie feeling that she's experienced the events of this day before. When a masked killer suddenly takes her life in a brutal attack, she once again magically wakes up in Carter's dorm room unharmed. Now, the frightened young woman must relive the same day over and over until she figures out who murdered her.