You have reached the cached page for https://google-earth.en.lo4d.com/windows
Below is a snapshot of the Web page as it appeared on 10/23/2020 (the last time our crawler visited it). This is the version of the page that was used for ranking your search results. The page may have changed since we last cached it. To see what might have changed (without the highlights), go to the current page.
You searched for: google earth We have highlighted matching words that appear in the page below.
Bing is not responsible for the content of this page.
Google Earth - Download 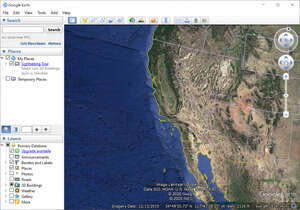 A review of Google Earth by Tina de Pierre

Google Earth is an innovative free program which basically allows users to zoom in and out of places across the planet, save certain countries like North Korea. In some cases, users can zoom in to just meters away from an objects.

With the development and improvements that Google has made to this product, 3D environments are now available and you can zoom in to not only 3D terrains, but into 3D buildings in mainly large cities across the planet including the United States, the United Kingdom, South Africa and Canada, not to mention dozens more.

The application includes a library of what they call layers, which are different views which you can add to the application from landmarks to parks to regions and touristic destinations. Google Earth also provides news information as an addition to typical landmarks.

Every single new version that Google releases of Google Earth seems to include ever more interesting content and if you haven't checked it out lately, Google has actually added the Moon and Mars to its portfolio of interesting locations. Also interesting to look at is the historical imagery which has been added as of late.

Overall, an amazing application and a great way to spend a rainy day just exploring our planet.

This download is licensed as freeware for the Windows (32-bit and 64-bit) operating system on a laptop or desktop PC from mapping without restrictions. Google Earth 7.3.3.7786 is available to all software users as a free download for Windows 10 PCs but also without a hitch on Windows 7 and Windows 8.

Compatibility with this get direction software may vary, but will generally run fine under Microsoft Windows 10, Windows 8, Windows 8.1, Windows 7, Windows Vista and Windows XP on either a 32-bit or 64-bit setup. A separate x64 version may be available from Google.

Ranking in
Mapping Software
#2 of 38