You have reached the cached page for https://www.filmibeat.com/bollywood/movies/good-newwz.html
Below is a snapshot of the Web page as it appeared on 5/14/2021 (the last time our crawler visited it). This is the version of the page that was used for ranking your search results. The page may have changed since we last cached it. To see what might have changed (without the highlights), go to the current page.
You searched for: good news bollywood movie release date 2019 We have highlighted matching words that appear in the page below.
Bing is not responsible for the content of this page.
Good Newwz (2019) | Good Newwz Movie | Good Newwz (Good News) Bollywood Movie Cast & Crew, Release Date, Review, Photos, Videos – Filmibeat 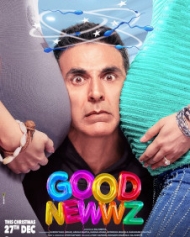 Varun and Deepti Batra (Akshay Kumar and Kareena Kapoor), a posh married Mumbai-based couple are unable to conceive a baby even after seven years of marriage. With her biological clock ticking, Deepti is keen to embrace motherhood so much so that at point, Varun tells her that he too wants to be a father but 'aisa nahi ki bedroom...