You have reached the cached page for https://www.dailymail.co.uk/news/article-2664397/Guildford-Four-miscarriage-justice-victim-Gerry-Conlon-dies-home-following-long-illness.html
Below is a snapshot of the Web page as it appeared on 4/8/2021 (the last time our crawler visited it). This is the version of the page that was used for ranking your search results. The page may have changed since we last cached it. To see what might have changed (without the highlights), go to the current page.
You searched for: gerry conlon guildford four case We have highlighted matching words that appear in the page below.
Bing is not responsible for the content of this page.
Guildford Four miscarriage of justice victim Gerry Conlon dies | Daily Mail Online

Gerry Conlon, who was wrongly jailed for an IRA attack on a pub in Guildford has died at his home in Belfast, it has been announced.

Mr Conlon, 60, had been suffering an illness for some time.

He received a life sentence after being wrongly convicted of 1974 attack alongside Paul HIll, Carole Richardson and Paddy Armstrong at the Old Bailey in 1975. 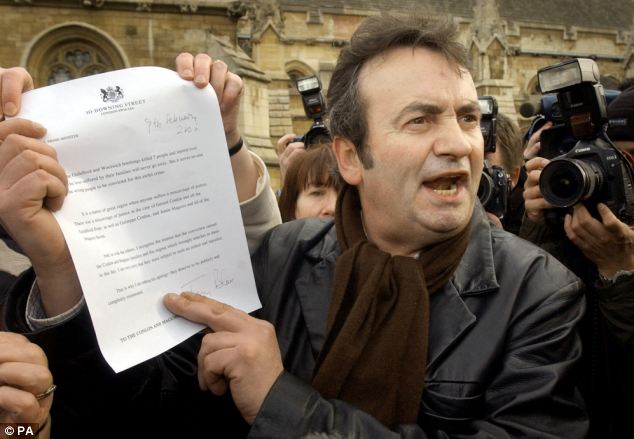 Gerry Conlon, received a letter of apology from Tony Blair in 2005 over his wrongful conviction and imprisonment over the 1974 Guildford pub bombings

Mr Conlon and the rest of the Guildford Four served 14 years of a life sentence for the attack which killed five people and injured 65, before their convictions were overturned in 1989.

It said: 'This morning we lost our Gerry.

'He brought life, love, intelligence, wit and strength to our family through its darkest hours.

'He helped us to survive what we were not meant to survive.

'We recognise that what he achieved by fighting for justice for us had a far, far greater importance - it forced the world's closed eyes to be opened to injustice; it forced unimaginable wickedness to be acknowledged; we believe it changed the course of history.

'We thank him for his life and we thank all his many friends for their love.' 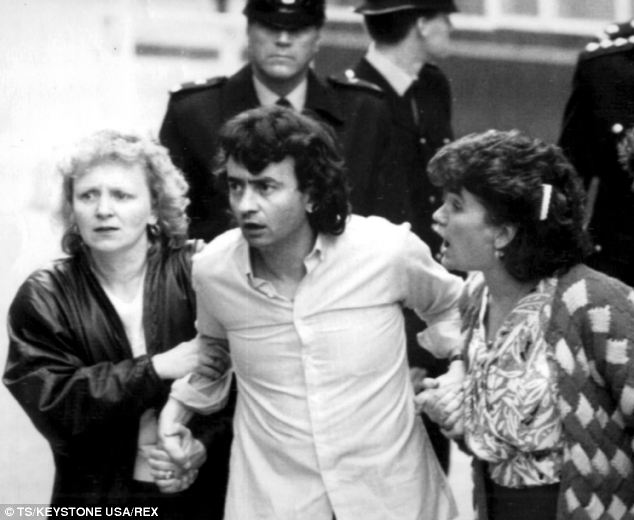 Alex Attwood, SDLP Stormont Assembly member for the area, paid tribute to him.

'He'd given an awful lot but yet had so much more to give,' Mr Attwood said.

'What he learned from his time in prison and campaign for release was the importance of not only raging against his own injustice but fighting for those who had also suffered miscarriages of justice.'

Mr Attwood added: 'He's now with his dad and his mum.'

Mr Conlon's father Giuseppe, who was jailed as part of a discredited investigation into a supposed bomb making family - the Maguire Seven, died after five years in jail.

His mother Sarah, a tireless campaigner for their freedom, died in 2008, aged 82. 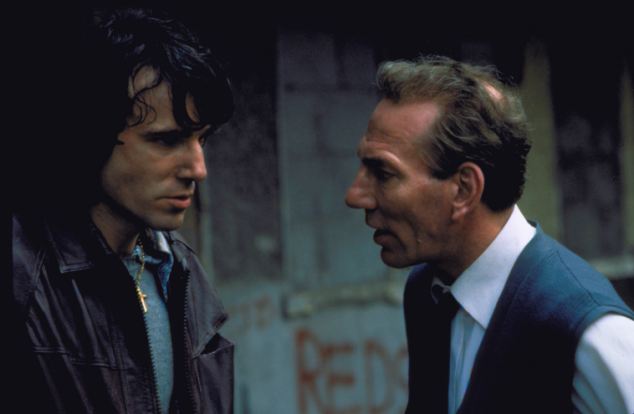 Daniel Day-Lewis, left played Gerry Conlon in the 1993 film In The Name Of The Father alongside Pete Postlethwaite, right, who played his father, Guiseppe Conlon

'Gerry and his father Giuseppe were two of the most infamous examples of miscarriages of justice by the British political and judicial system,' Mr Adams said.

'Their story was told graphically in the film In The Name Of The Father.

'To his family and friends I want to extend my sincere condolences.' 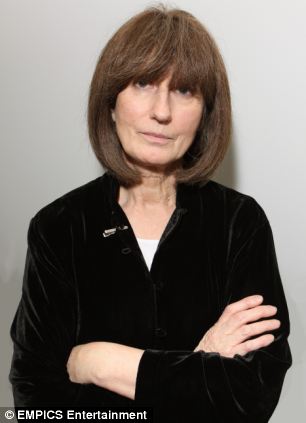 Mr Conlon was represented by leading human right's lawyer Gareth Peirce, who also secured the release of the Birmingham Six

In 2009 Mr Conlon wrote about the personal and emotional battles he suffered as a result of his incarceration and fight for freedom.

He suffered two breakdowns, attempted suicide and became addicted to drugs and alcohol following his release.

'The ordeal has never left me,' he said.

The high-profile deadly attacks in Guildford, Woolwich and Birmingham in 1974 became better known for the huge miscarriages of justices they led to in the aftermath, with the public demanding the perpetrators be brought to justice.

Gerry Conlon, Paddy Armstrong, Paul Hill and Carole Richardson were jailed in 1975 for the attack on the Horse and Groom pub in Guildford which killed four soldiers and a civilian and injured scores more. Mr Hill and Mr Armstrong were also jailed for the Woolwich bombing in which two people died.

Later Giuseppe, and members of the Maguire family - who became known as the Maguire Seven - were arrested and jailed for possessing and supplying the IRA with the explosives for the bombs.

But all those involved protested their innocence and after years of campaigning their convictions were overturned.

In October 1989 the Court of Appeal quashed the sentences of the Guildford Four after they had served 14 years behind bars, amid doubts raised about the police evidence against them.

An investigation into the case by Avon and Somerset Police found serious flaws in the way Surrey Police handled the case.

Emerging from the Court of Appeal a free man, Mr Conlon declared: ''I have been in prison for something I did not do. I am totally innocent.

'The Maguire Seven are innocent. Let's hope the Birmingham Six are freed.'

In July 2000 the Prime Minister Tony Blair became the first senior politician to apologise to the Guildford Four. 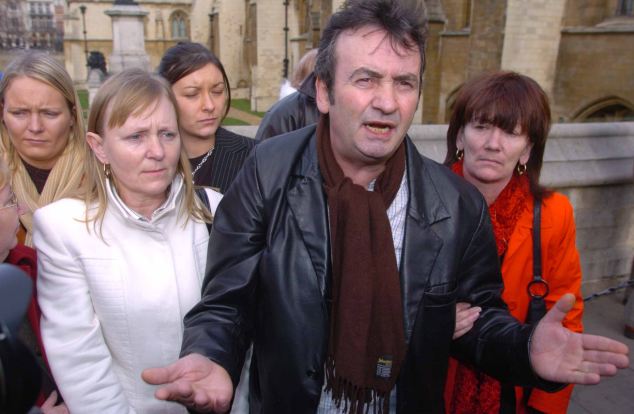 In a letter sent to Paul Hill's wife - one of the American Kennedy clan - he wrote: 'There were miscarriages of justice in your husband's case, and the cases of those convicted with him. I am very sorry indeed that this should have happened.'

Giuseppe Conlon died in prison in 1980, still protesting his innocence, and never saw his son freed.

In June 1991 Giuseppe's sentence was posthumously overturned by the Court of Appeal along with those of the Maguires.

The Birmingham Six also had their convictions overturned on appeal in 1991.

Although the Guildford Four scandal has been known for 30 years the case files remain classified.

Along with the Birmingham Six the material associated with the investigation and prosecution is held under the Official Secrets Act where it can remain shut to the public for 75 years.

Mr Conlon in recent years took up the cause of a number of dissident republicans jailed in Northern Ireland including Marian Price.

She was found guilty of offences linked to paramilitaries including providing a phone used by the Real IRA hit squad that murdered two British soldiers at the Massereene barracks in Co Antrim in 2009.

He insisted his approach was not one of political motivation but for the right of people to have a fair trial and the right for justice to be seen to be done in public.

'I am saddened to hear of the death of Gerry Conlon and send my condolences to his family and friends.

'Mr Conlon suffered a grave miscarriage of justice along with his father, Giuseppe, Paul Hill, Carol Richardson and Paddy Armstrong.

'In later years Gerry drew from his experiences to campaign on behalf of others with the group Miscarriages of Justice Organisation.

'His loss will be felt both within the community in west Belfast and across the world with all those who work in pursuit of justice.'