You have reached the cached page for https://www.irishcentral.com/opinion/others/guildford-four-freed
Below is a snapshot of the Web page as it appeared on 4/13/2021 (the last time our crawler visited it). This is the version of the page that was used for ranking your search results. The page may have changed since we last cached it. To see what might have changed (without the highlights), go to the current page.
You searched for: gerry conlon guildford four case We have highlighted matching words that appear in the page below.
Bing is not responsible for the content of this page.
The Guildford Four were freed

On This Day: Guildford Four were freed after 15 years wrongful imprisonment 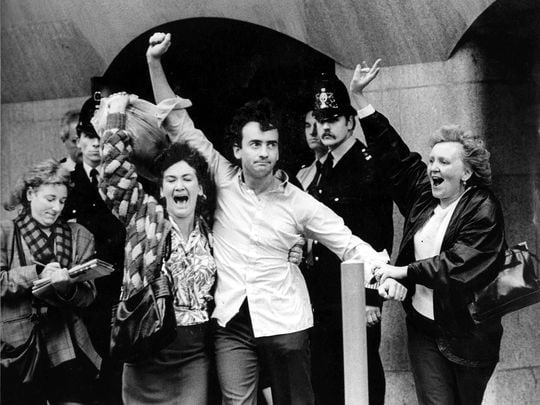 Gerry Conlon, of the Guildford Four, released from prison in 1989. YouTube

On October 19, 1989, The Guilford Four were released from prison after 15 years in prison having been wrongly convicted of the bombing of a London pub which killed five people.

Editor’s Note: Paul Hill, Gerry Conlon, Paddy Armstrong, and Carole Richardson, known as the Guilford Four, spent 15 years in prison after being wrongfully convicted of the Guildford Pub Bombings. On this day, Oct 19, 1989, the four innocent parties were released from prison.

They suffered horrific torture and intimidation and were forced to sign confessions. Two years after the conviction of the Guildford Four, the IRA's Balcombe Street gang took responsibility for the bombings.

Sign up to IrishCentral's newsletter to stay up-to-date with everything Irish!

Incredibly, Gerry Conlon’s father, Giuseppe, was also stitched up for the “crime” and died in jail.

A worldwide campaign led to their release on October 19, 1989, after 15 years in jail, and an unprecedented apology from the British Prime Minister. Their case became the basis for the Oscar-nominated film “In the Name of the Father” starring Daniel Day-Lewis.

One of the 'Guildford Four,' Gerry Conlon,' died from cancer in June 2014 at the age of 60. After his release from prison, Conlon dedicated his life to the advocacy and commitment to righting injustice and wrongful imprisonments.

Below, Paul Hill, a fellow Guildford Four member and a leading human rights campaigner based in the US, remembers his friend Gerry Conlon.

I was awoken this grey morning (rather fitting) by the constant ringing of my phone to be informed of the death of Gerry Conlon, my fellow member of the Guildford Four.

Doors I had hoped would remain closed began to open in my memory.

It's incredibly difficult to try to explain to someone exactly what the loss of 15 years of one's life is like.

Or indeed to ask someone to comprehend having to endure those years as an innocent person, in the hostile environment that was the English prison system.

The simplest way is to think of everything one has achieved in the years between 20 and 35. A career, a home, a marriage, children. We had none of those.

Gerry was a young man who loved life, music, football. He would have been the first to tell you he had no interest whatsoever in politics.

The background of what he went to prison for is well documented, as is the injustice he suffered,

But the baggage he carried from that is often overlooked, baggage that one can never check.

The mental scars, not visible, remained unhealed. They eat away at one’s being and reopen constantly.

Gerry fought the demons that an injustice unleashes, but I know that he mostly fought those alone and in the dead of night.

People have expressed the opinion that Gerry must have been an incredible man. No, he was not. He was an ordinary man who suffered an incredible injustice.

No doubt we shall have those who (just like after his release) will extol his virtues, whilst having done nothing themselves whilst he was incarcerated.

If I could be so bold, and on behalf of Gerry, I would like to thank all those very ordinary people who believed in him when (unlike today) it was not politically hip to do so. Irish America always stood with us -- thank you. Irish governments and Irish embassies did not.

I want to thank the folks who stood in the rain outside the British Embassy, who were accused of being the fellow travelers of terrorists,

The ordinary folk in Ireland who were harassed and photographed by the special branch for having the courage to attempt to right a grievous injustice.

We have come a long way along a harsh, painful road.

Gerry helped us all along that journey.

He was a man of immense humor and a big football fan, no doubt glued to the World Cup.

I know he would give a wry smile knowing England went out before him.

Here is his family’s statement. It captures far more eloquently than I can what Gerry represented.

"He brought life, love, intelligence, wit, and strength to our family through its darkest hours. He helped us to survive what we were not meant to survive. We recognize that what he achieved by fighting for justice for us had a far, far greater importance - it forced the world's closed eyes to be opened to injustice; it forced unimaginable wickedness to be acknowledged; we believe it changed the course of history.

Here's your chance to win an Irish pub, takeaway, and apartment for just €23