You have reached the cached page for https://wikimili.com/en/Georgina_Cates
Below is a snapshot of the Web page as it appeared on 4/11/2020 (the last time our crawler visited it). This is the version of the page that was used for ranking your search results. The page may have changed since we last cached it. To see what might have changed (without the highlights), go to the current page.
You searched for: georgina lowe wikipedia encyclopedia We have highlighted matching words that appear in the page below.
Bing is not responsible for the content of this page.
Georgina Cates - WikiMili, The Free Encyclopedia

England is a country that is part of the United Kingdom. It shares land borders with Wales to the west and Scotland to the north-northwest. The Irish Sea lies west of England and the Celtic Sea lies to the southwest. England is separated from continental Europe by the North Sea to the east and the English Channel to the south. The country covers five-eighths of the island of Great Britain, which lies in the North Atlantic, and includes over 100 smaller islands, such as the Isles of Scilly and the Isle of Wight.

Born Clare Woodgate in Colchester, Essex, she attended Colchester County High School for Girls and broke into television acting when she was only sixteen years old, playing the role of the original Jenny Porter on the BBC's 2point4 Children . After two series she left the show to concentrate on acting in television drama such as Casualty and The Bill and in low-budget films. [1] [2]

Colchester is a historic market town and the largest settlement within the borough of Colchester in the county of Essex. Colchester was the first Roman-founded city in Britain, and Colchester lays claim to be regarded as Britain's oldest recorded town. It was for a time the capital of Roman Britain, and is a member of the Most Ancient European Towns Network.

Essex is a county in the south-east of England, north-east of London. One of the home counties, it borders Suffolk and Cambridgeshire to the north, Hertfordshire to the west, Kent across the estuary of the River Thames to the south, and London to the south-west. The county town is Chelmsford, the only city in the county. For government statistical purposes Essex is placed in the East of England region.

The British Broadcasting Corporation (BBC) is a British public service broadcaster. Its headquarters are at Broadcasting House in Westminster, London, and it is the world's oldest national broadcasting organisation and the largest broadcaster in the world by number of employees. It employs over 20,950 staff in total, 16,672 of whom are in public sector broadcasting. The total number of staff is 35,402 when part-time, flexible, and fixed-contract staff are included.

In 1995, Cates (then still known as Clare Woodgate) auditioned for the role of Stella in the film An Awfully Big Adventure but failed to be cast. On returning home she dyed her hair red, and re-invented herself as a 17-year-old Liverpudlian girl called Georgina Cates who had no previous acting experience. When she re-applied for the same role, the casting director hired her. She went on to appear in such films as Frankie Starlight (1995), Illuminata (1998), and A Soldier's Sweetheart (1998). She received critical acclaim for her role as Amanda in Clay Pigeons (1998) with Vince Vaughn and Joaquin Phoenix. After a seven-year break from the movie industry, Cates returned to the independent film genre to co-star in Sinner , for which she won a Best Actress award at the Brooklyn Arts Council International Film & Video Festival. [1] 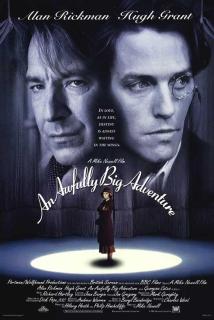 An Awfully Big Adventure is a 1995 British coming-of-age film directed by Mike Newell. The story concerns a teenage girl who joins a local repertory theatre troupe in Liverpool. During a winter production of Peter Pan, the play quickly turns into a dark metaphor for youth as she becomes drawn into a web of sexual politics and intrigue.

Frankie Starlight is a 1995 drama–romantic war film directed by Michael Lindsay-Hogg. The screenplay was written by Ronan O'Leary and Chet Raymo, based on the internationally best-selling novel The Dork of Cork by Raymo.

Illuminata is a 1998 romantic comedy film directed by John Turturro and written by Brandon Cole and John Turturro, based on Cole's play. The cinematographer was Harris Savides. The puppet sequences were done by Roman Paska. Music for the 'Tuccio Operatic Dream Sequence' was composed by Richard Termini.

In 1997, Cates married her second husband, American actor Skeet Ulrich, with whom she had twins. The couple separated in 2004, and divorced in 2005, citing irreconcilable differences. [3]

The United States of America (USA), commonly known as the United States or America, is a country composed of 50 states, a federal district, five major self-governing territories, and various possessions. At 3.8 million square miles, the United States is the world's third or fourth largest country by total area and is slightly smaller than the entire continent of Europe's 3.9 million square miles. With a population of over 327 million people, the U.S. is the third most populous country. The capital is Washington, D.C., and the largest city by population is New York City. Forty-eight states and the capital's federal district are contiguous in North America between Canada and Mexico. The State of Alaska is in the northwest corner of North America, bordered by Canada to the east and across the Bering Strait from Russia to the west. The State of Hawaii is an archipelago in the mid-Pacific Ocean. The U.S. territories are scattered about the Pacific Ocean and the Caribbean Sea, stretching across nine official time zones. The extremely diverse geography, climate, and wildlife of the United States make it one of the world's 17 megadiverse countries.

Bryan Ray "Skeet" Ulrich is an American actor. He is best known for his roles in popular 1990s films, as Billy Loomis in Scream and Chris Hooker in The Craft. Since 2017, he has starred as FP Jones on The CW's Riverdale. His other television roles include Paul Callan in the short-lived ABC drama Miracles, Johnston Jacob "Jake" Green, Jr. in the television series Jericho, and L.A.P.D. Detective Rex Winters, a former Marine from the Law & Order franchise.

The concept of irreconcilable differences provides possible grounds for divorce in a number of jurisdictions. 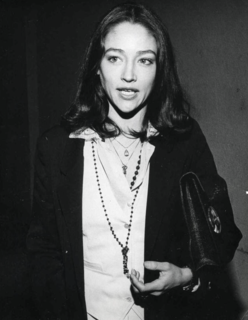 Olivia Hussey is an Argentine-British actress. After appearing in theatre in London, Hussey was chosen to play the role of Juliet in Franco Zeffirelli's 1968 film version of Romeo and Juliet. She won a Golden Globe and the David di Donatello Award for her performance, and gained international recognition.

Michelle Christine Trachtenberg is an American actress. She is best known for playing the lead role of Harriet M. Welsch in Harriet the Spy, Nona F. Mecklenberg in The Adventures of Pete & Pete, Dawn Summers in Buffy the Vampire Slayer, and Georgina Sparks in Gossip Girl.

Debra Lynn Messing is an American actress. After graduating from New York University's Tisch School of the Arts, Messing received short-lived roles on television series such as Ned and Stacey on Fox (1995–1997) and Prey on ABC (1998). She achieved her breakthrough role as Grace Adler, an interior designer, on the NBC sitcom Will & Grace (1998–2006), for which she was critically acclaimed, receiving six Golden Globe Award nominations and five Primetime Emmy Award nominations for Outstanding Lead Actress in a Comedy Series, winning once in 2003.

Claire Trevor was an American actress.

Ellen Rona Barkin is an American actress and producer. Her breakthrough role was in the 1982 film Diner, and in the following years she had starring roles in films such as Tender Mercies (1983), The Adventures of Buckaroo Banzai Across the 8th Dimension (1984), The Big Easy (1987), Johnny Handsome and Sea of Love. 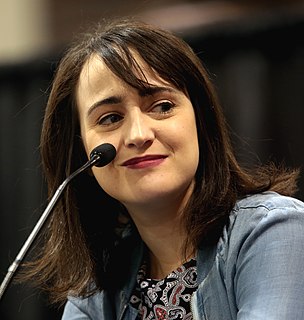 Mara Elizabeth Wilson is an American writer and former child actress. Her best known roles include Natalie Hillard in Mrs. Doubtfire (1993), Susan Walker in Miracle on 34th Street (1994), Matilda Wormwood in Matilda (1996), and Lily Stone in Thomas and the Magic Railroad (2000). Since retiring from film acting, Wilson has focused on writing, penning the play Sheeple which was produced for the New York International Fringe Festival in 2013 as well as publishing a memoir, Where Am I Now?: True Stories of Girlhood and Accidental Fame (2016). 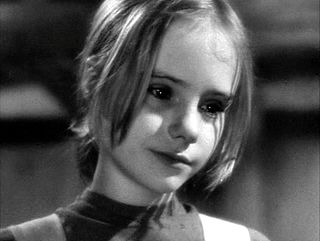 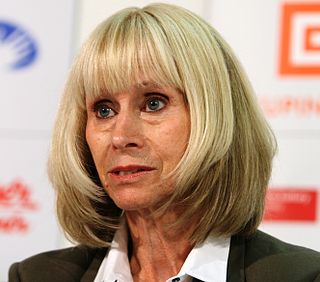 Rita Tushingham is an English actress. She is known for her starring roles in films including A Taste of Honey (1961), The Leather Boys (1964), The Knack …and How to Get It (1965), Doctor Zhivago (1965), and Smashing Time (1967). For A Taste of Honey, she won the Cannes Film Festival Award for Best Actress, and Most Promising Newcomer at both the BAFTA Awards and Golden Globe Awards. Her other film appearances include An Awfully Big Adventure (1995), Under the Skin (1997), and Being Julia (2004). 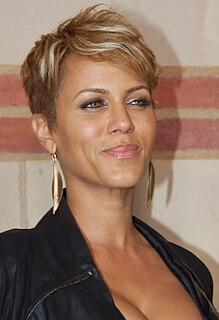 Nicole Ari Parker-Kodjoe is an American actress and model. She made her screen debut with a leading role in the critically acclaimed independent film The Incredibly True Adventure of Two Girls in Love (1995) and went on to appear in Boogie Nights (1997), directed by Paul Thomas Anderson.

Rena Owen is a New Zealand actress in theatre, television and film. Owen is best known for her leading role as Beth Heke in Lee Tamahori's Once Were Warriors and as Taun We in George Lucas's Star Wars: Episode II – Attack of the Clones.

Laura Elizabeth Dern is an American actress. She is the recipient of numerous accolades, including four Golden Globe Awards and a Primetime Emmy Award, and has been nominated for two Academy Awards.

Klea Scott is an American-born Panamanian-Canadian actress, known for her roles on television. She starred in the short-lived CBS police drama Brooklyn South (1997-98), and later was cast as Emma Hollis on the Fox television series Millennium for its third and final season. From 2005 to 2007, she starred in the CBC Television crime drama Intelligence.

Marc Benardout is a British film director and film producer. He is a distant relative of the American composer Irving Berlin and the French science fiction writer Jules Verne.

Lois January was an American actress who performed small roles in several B-movies during the 1930s.

Lord Nicholas Wayman-Harris is a British film editor based in Santa Monica, California. 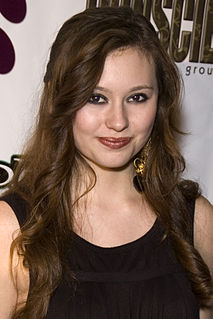 Jillian Clare is an American actress and singer. She is best known for her role as pre-teen Abigail "Abby" Deveraux on Days of Our Lives and for her lead role as Victoria "Tori" Archer on Miss Behave, a teen drama web series that she also produces.

An Awfully Big Adventure is a novel written by Beryl Bainbridge. It was short listed for the Booker Prize in 1990 and adapted as a movie in 1995. The story was inspired by Bainbridge's own experiences working at the Liverpool Playhouse in her youth.