You have reached the cached page for https://www.express.co.uk/entertainment/films/383242/Mark-Strong-Thankfully-my-wife-saw-evil-in-me
Below is a snapshot of the Web page as it appeared on 4/11/2021 (the last time our crawler visited it). This is the version of the page that was used for ranking your search results. The page may have changed since we last cached it. To see what might have changed (without the highlights), go to the current page.
You searched for: gabriel strong and mark strong We have highlighted matching words that appear in the page below.
Bing is not responsible for the content of this page.
Mark Strong: Thankfully, my wife saw evil in me... | Films | Entertainment | Express.co.uk 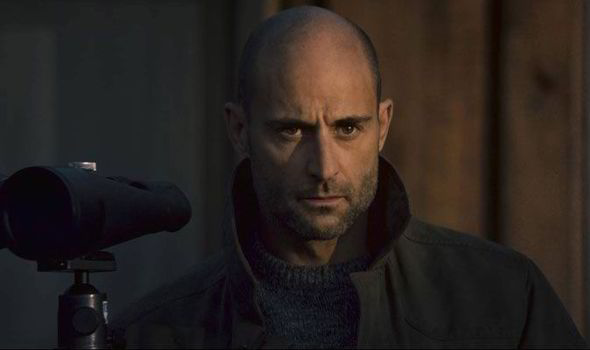 TOUGH GUY: As Jacob Sternwood in thriller Welcome To The Punch

When you subscribe we will use the information you provide to send you these newsletters. Sometimes they'll include recommendations for other related newsletters or services we offer. Our Privacy Notice explains more about how we use your data, and your rights. You can unsubscribe at any time.

Mark Strong knows exactly who to blame for all the bad guys he has played in recent years: his wife. The prolific actor is Hollywood’s favourite go-to villain with an impressive array of nasties on his CV in the likes of Robin Hood, Sherlock Holmes, Kick-Ass, Green Lantern and the new British action-thriller Welcome To The Punch.

It all kicked off, he tells me, when he was cast as East End hoodlum Harry Sparks in the 2004 TV adaptation of Jake Arnott’s The Long Firm, at the urging of then BBC TV executive Liza Marshall. She is now Mrs Strong and a senior executive at Sir Ridley Scott’s film and television company.

“She saw my evil soul before anybody else,” laughs the disarmingly friendly actor as we chat over a cup of tea.

“She realised that I could play the part but nobody else did. The people at the BBC didn’t believe it, nor did the writer Joe Penhall who is now a great mate. They all thought because of the parts I had played: ‘He’s way too nice, he can’t plumb the depths of darkness.’”

Mark got the role and wedding bells soon followed. “ I’m sleeping my way to the top,” jokes the actor who has two children with Marshall, Gabriel, eight, and Roman, five. Daniel Craig, his co-star from seminal TV series Our Friends In The North is godfather to the former (“He is a great godfather and very generous.”)

After The Long Firm, Mark, who trained at the Bristol Old Vic after abandoning a law degree, hit a rich box office seam in big-screen villainy beginning with 2005’s Syriana in which he played an Iranian agent who pulled out CIA spy George Clooney’s fingernails.

However, interspersed with the bad guy stuff are several scene-stealing character roles that show just how good an actor he is, the latest of which was his very memorable performance in Zero Dark Thirty. Mark’s table-thumping scene, in which his CIA boss berates colleagues for failing to catch Osama Bin Laden, was a peerless bit of movie-hijacking. He confides his tactic for picking juicy supporting parts. “A friend in the movies said to me once: ‘There are five key moments in a film which are the ones people talk about afterwards and if you are in one of those you are in the movie.’ For me that scene in Zero Dark Thirty was one of those moments.” 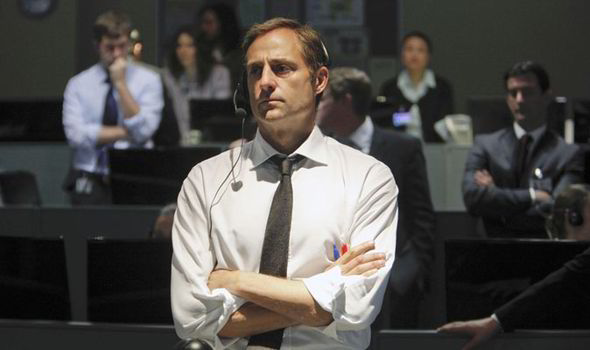 There are five key moments in a film which are the ones people talk about afterwards and if you are in one of those you are in the movie.

Although he played one of the good guys in that Oscar-winning picture, his wife still clearly sees the evil in her beloved. Liza is the executive producer of  his new picture Welcome To The Punch in which he plays a big cheese London crime lord, albeit one who has retired to Iceland with his loot.

Inspired by the slick, silvery police thrillers of Michael Mann and John Woo, it is an entertaining and stylish picture that pits Mark’s Jacob Sternwood against James McAvoy’s obsessive cop Max who has is sucked back into the criminal underworld in London out of love and concern for his troubled young son. He is not actually trying to rob anyone. In the interests of fl eshing out his character, Mark fi lmed several scenes giving Sternwood a more human and sympathetic dimension rooted in his troubled personal life. They did not make the fi nal cut, however.

“It would have been great to have them and it was always envisaged that they would be there but once they got into the edit it was felt they slowed the movie down.” There is no hint of disgruntlement from Mark, he is too much of a pro for that, but you can sense his excitement at the more robust acting challenge presented by his latest project, an adaptation of the bestselling thriller Before I Go To Sleep. The story is essentially a three-hander in which a married woman with amnesia attempts to piece her life back together with the aid of her doctor. Mark plays the latter, Nicole Kidman the troubled woman and Colin Firth is her husband. Filming began a few days ago at Twickenham Studios. Produced by Sir Ridley Scott’s company Scott Free, one of the picture’s executives is Liza. KEEPING things in the family certainly comes naturally to Mark who, having come to fatherhood relatively late, is a committed family man.“For me family comes over and above everything,” says the actor, an only child brought up by his Austrian mother after his Italian father walked out soon after his birth.

“I think as a younger actor I might have felt differently but now at my age it is the be all and end all and everything I do I do for the family, I have to admit.” With two young children and two such busy, high-powered working parents, family life has its challenges, “but you just make it work”. He continues: “When I talk to younger actors and young people in general who are holding off having children because they think they cannot fi t them into their busy lives I now know, and am able to say to them: ‘You’ve just got to get on with it; there is never going to be a right time.’”

In any case, one imagines most children would forgive their busy father’s absences on a fi lm set if their godfather was James Bond. Strong says he caught up with the Skyfall star just last week when he was in London for the premiere of Oz: The Great And The Powerful starring his wife Rachel Weisz. They reminisced about Our Friends In The North. “We were remembering how we walked down the streets of Newcastle one day and looked at each other and said: ‘Do you think this is going to be any good?’ We had no idea it would give us our careers.”

Welcome To The Punch is released on March 15

Gibraltar 'thanks Britain' as vaccination programme closes in on its target

Sound Of Metal: Riz Ahmed is the first Muslim nominated for a Best Actor Oscar

BAFTAs 2021: All the nominees and how to watch awards ahead of ceremony

The Woman in the Window release date, cast, trailer, plot: all about thriller adaptation

Ghostbusters Afterlife cast: Who from the original cast is coming back?

Amazon Prime releases in April 2021: What new movies are on Amazon Prime?

Promising Young Woman streaming: Can I watch Oscar-nominated movie online? Is It legal?

How many Bond girls have there been? Full list of EVERY 007 love interest

Honor Blackman: Bond Girl who was 'no bimbo' and more than a match for Sean Connery