You have reached the cached page for http://www.australiancar.reviews/Subaru_FA20D_Engine.php
Below is a snapshot of the Web page as it appeared on 1/28/2022 (the last time our crawler visited it). This is the version of the page that was used for ranking your search results. The page may have changed since we last cached it. To see what might have changed (without the highlights), go to the current page.
You searched for: full throttle movie download torrent 720p 1080p free We have highlighted matching words that appear in the page below.
Bing is not responsible for the content of this page.
FA20D Subaru Engine
1550
Reviews
62000
Models

The FA20D engine was a 2.0-litre horizontally-opposed (or 'boxer') four-cylinder petrol engine that was manufactured at Subaru's engine plant in Ota, Gunma. The FA20D engine was introduced in the Subaru BRZ and Toyota ZN6 86; for the latter, Toyota initially referred to it as the 4U-GSE before adopting the FA20 name.

Key features of the FA20D engine included it:

The FA20D engine had an aluminium alloy cylinder head with chain-driven double overhead camshafts. The four valves per cylinder – two intake and two exhaust – were actuated by roller rocker arms which had built-in needle bearings that reduced the friction that occurred between the camshafts and the roller rocker arms (which actuated the valves). The hydraulic lash adjuster – located at the fulcrum of the roller rocker arm – consisted primarily of a plunger, plunger spring, check ball and check ball spring. Through the use of oil pressure and spring force, the lash adjuster maintained a constant zero valve clearance.

The camshaft timing gear assembly contained advance and retard oil passages, as well as a detent oil passage to make intermediate locking possible. Furthermore, a thin cam timing oil control valve assembly was installed on the front surface side of the timing chain cover to make the variable valve timing mechanism more compact. The cam timing oil control valve assembly operated according to signals from the ECM, controlling the position of the spool valve and supplying engine oil to the advance hydraulic chamber or retard hydraulic chamber of the camshaft timing gear assembly.

To alter cam timing, the spool valve would be activated by the cam timing oil control valve assembly via a signal from the ECM and move to either the right (to advance timing) or the left (to retard timing). Hydraulic pressure in the advance chamber from negative or positive cam torque (for advance or retard, respectively) would apply pressure to the advance/retard hydraulic chamber through the advance/retard check valve. The rotor vane, which was coupled with the camshaft, would then rotate in the advance/retard direction against the rotation of the camshaft timing gear assembly – which was driven by the timing chain – and advance/retard valve timing. Pressed by hydraulic pressure from the oil pump, the detent oil passage would become blocked so that it did not operate.

When the engine was stopped, the spool valve was put into an intermediate locking position on the intake side by spring power, and maximum advance state on the exhaust side, to prepare for the next activation.

The intake system for the Toyota ZN6 86 and Subaru Z1 BRZ included a 'sound creator', damper and a thin rubber tube to transmit intake pulsations to the cabin. When the intake pulsations reached the sound creator, the damper resonated at certain frequencies. According to Toyota, this design enhanced the engine induction noise heard in the cabin, producing a ‘linear intake sound’ in response to throttle application.

The FA20D engine had:
Based on inputs from sensors, the ECM controlled the injection volume and timing of each type of fuel injector, according to engine load and engine speed, to optimise the fuel:air mixture for engine conditions. According to Toyota, port and direct injection increased performance across the revolution range compared with a port-only injection engine, increasing power by up to 10 kW and torque by up to 20 Nm.

As per the table below, the injection system had the following operating conditions: 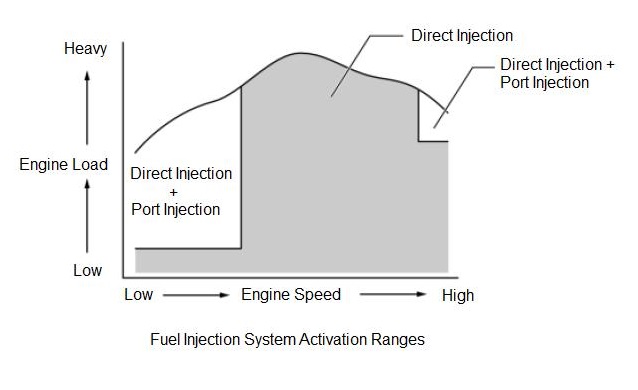 The FA20D engine used a hot-wire, slot-in type air flow meter to measure intake mass – this meter allowed a portion of intake air to flow through the detection area so that the air mass and flow rate could be measured directly. The mass air flow meter also had a built-in intake air temperature sensor.

The FA20D engine had a 4-2-1 exhaust manifold and dual tailpipe outlets. To reduce emissions, the FA20D engine had a returnless fuel system with evaporative emissions control that prevented fuel vapours created in the fuel tank from being released into the atmosphere by catching them in an activated charcoal canister.

For the Subaru BRZ and Toyota 86, there have been reports of
that were accompanied by

Initially, Subaru and Toyota attributed these symptoms to the VVT-i/AVCS controllers not meeting manufacturing tolerances which caused the ECU to detect an abnormality in the cam actuator duty cycle and restrict the operation of the controller. To fix, Subaru and Toyota developed new software mapping that relaxed the ECU’s tolerances and the VVT-i/AVCS controllers were subsequently manufactured to a ‘tighter specification’.

There have been cases, however, where the vehicle has stalled when coming to rest and the ECU has issued error codes P0016 or P0017 – these symptoms have been attributed to a faulty cam sprocket which could cause oil pressure loss. As a result, the hydraulically-controlled camshaft could not respond to ECU signals. If this occurred, the cam sprocket needed to be replaced.