You have reached the cached page for http://benjielayug.com/2019/11/fitzroy-gardens-melbourne-australia.html
Below is a snapshot of the Web page as it appeared on 2/21/2021 (the last time our crawler visited it). This is the version of the page that was used for ranking your search results. The page may have changed since we last cached it. To see what might have changed (without the highlights), go to the current page.
You searched for: fitzroy gardens melbourne australia We have highlighted matching words that appear in the page below.
Bing is not responsible for the content of this page.
Fitzroy Gardens (Melbourne, Australia) – B.L.A.S.T. – Live Life to the Fullest ……… Don't Stay Put 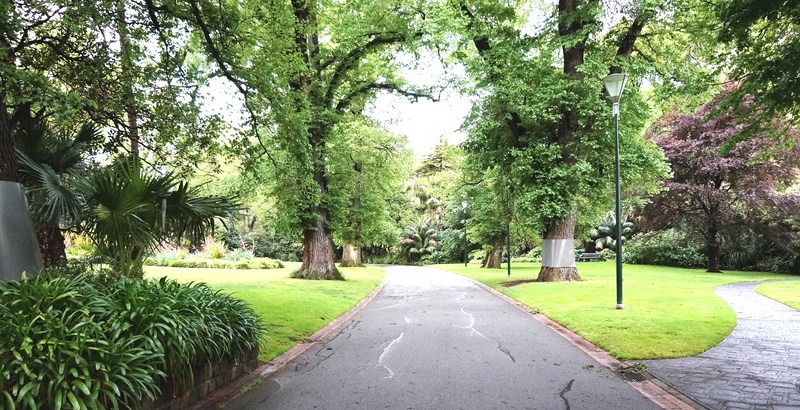 After the 6 PM mass at St. Patrick’s Cathedral, we all walked to the nearby 26-hectare (64-acre) Fitzroy Garden. Located on the southeastern edge of the Melbourne Central Business District, the gardens are bounded by Clarendon Street, Albert Street, Lansdowne Street, and Wellington Parade with the Treasury Gardens, across Lansdowne Street, to the west. 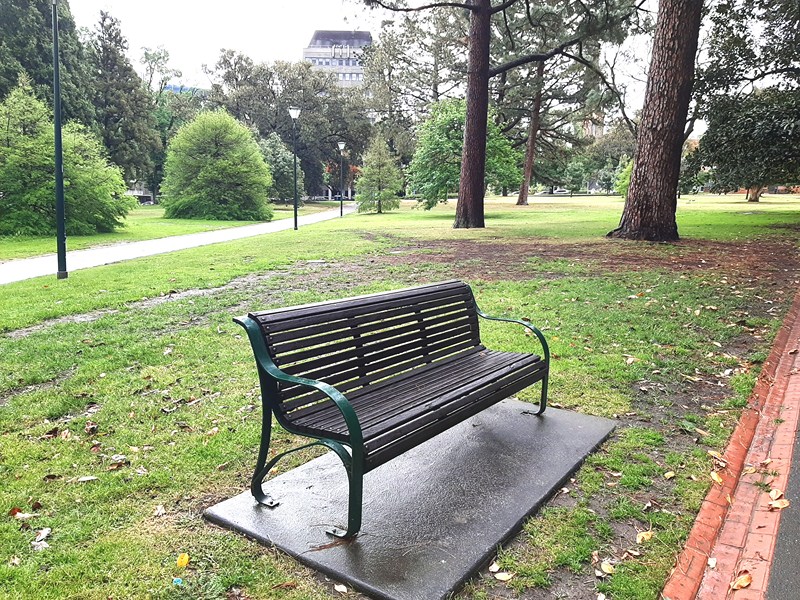 Named after Sir Charles Augustus FitzRoy, a governor (1846-51) of New South Wales and Governor-General of the Australian Colonies (1851-1855), it is one of the major Victorian era landscaped gardens in Australia, adding to Melbourne‘s claim to being the garden city of Australia. 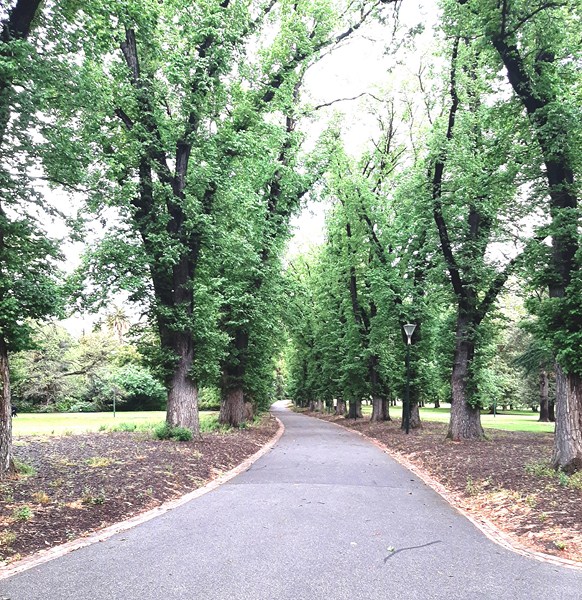 Here’s the historical timeline of the gardens: 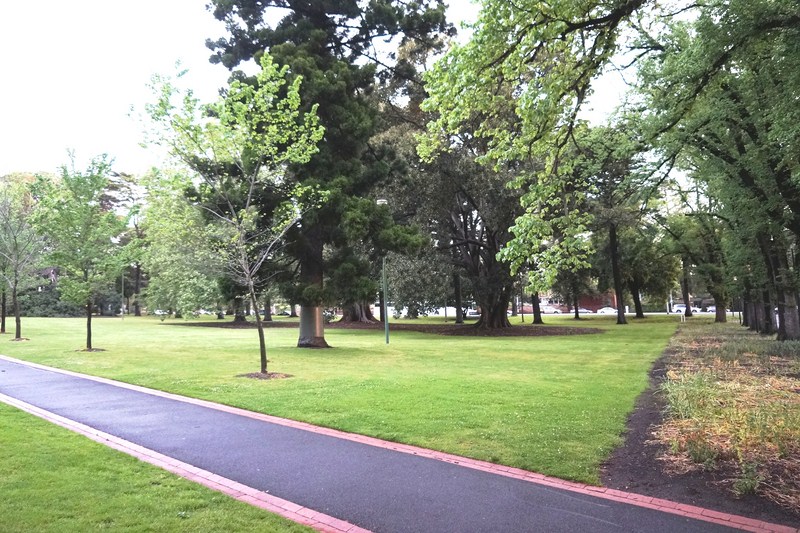 The land on which the garden was built was originally swampy, with a creek draining into the Yarra River. The garden, initially designed by Clement Hodgkinson, was planted by James Sinclair, the park gardener, as a dense woodland with meandering avenues. 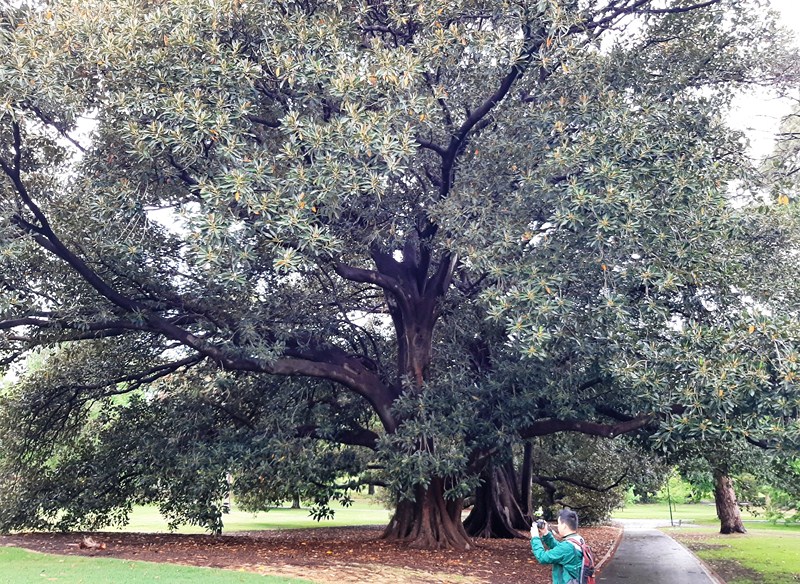 The creek, used for the irrigation of the western side of the gardens for fifty years, was landscaped with ferns and 130 willows but this did not stop it from smelling foul from the sewage from the houses of East Melbourne. 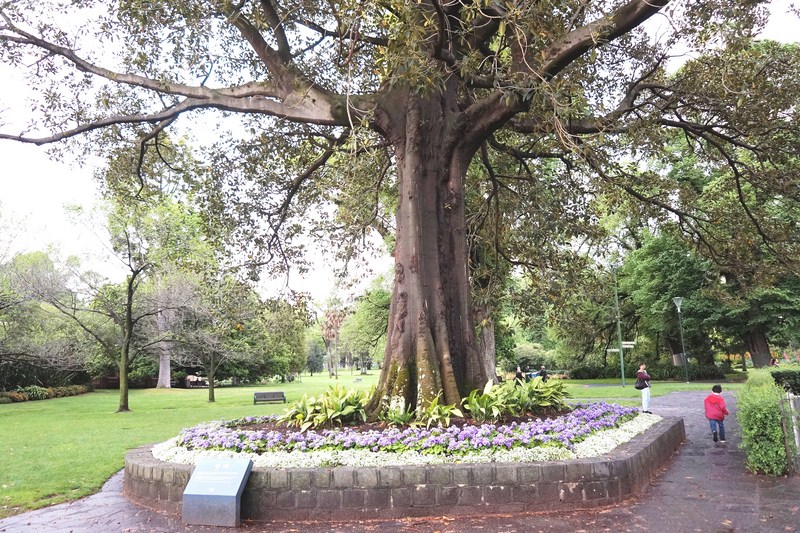 In the early 1900s, the creek water substantially improved with the installation of sewerage mains to the residences of East Melbourne. 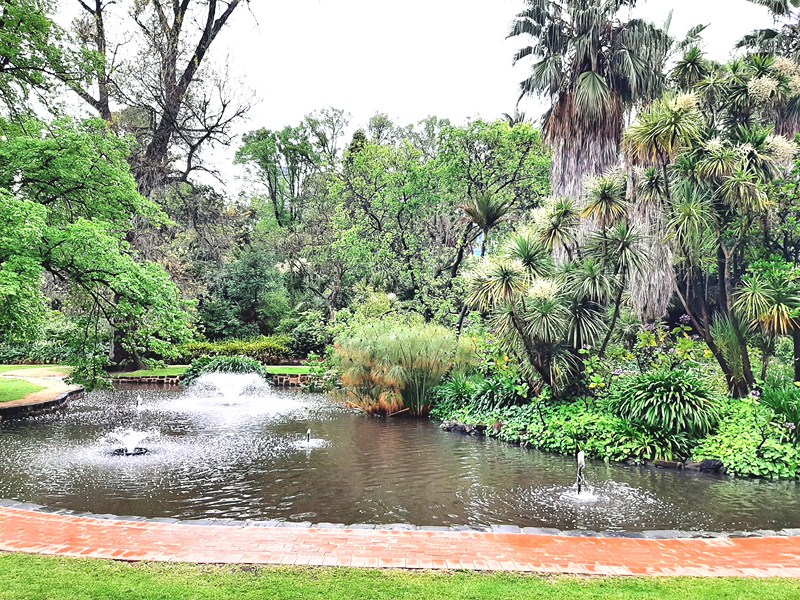 In the early years, to provide wind breaks, quick growing blue gums and wattles were planted while elm trees were planted to create avenues along pathways which, unknowingly, created a pattern resembling the Union Flag. With the creation of new planting in areas like the Mound and the Grey Street Walk, sub tropical planting became a feature of the gardens. 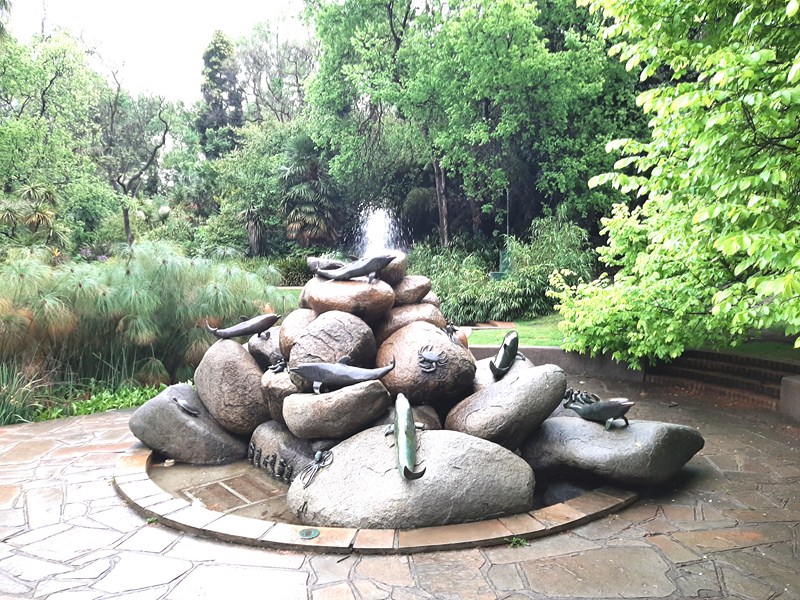 The Dolphin Fountain, installed at the northern end of the lake, adjacent to the Mound, was sculpted by June Arnold and consists of a pyramid of granite boulders upon which are mounted assorted sea creatures – dolphins, octopus, crabs, sea birds, sea horses, starfish, turtles and shrimps. Wealthy benefactors Dinah and Henry Krongold donated $30,000 towards the construction of the fountain and the architectural consultants were Perrott, Lyon and Mathieson.

The trees that line many of the pathways are the most notable feature of the gardens. The gardens, home to rainbow lorikeets, ducks, brushtail and ringtail possums, and microbats (small insect eating bats), are visited at night by grey-headed flying foxes (a large nectar and fruit eating bat) and powerful owls. The presence of these Australian wildlife makes the city gardens especially enjoyable for overseas visitors and locals alike. 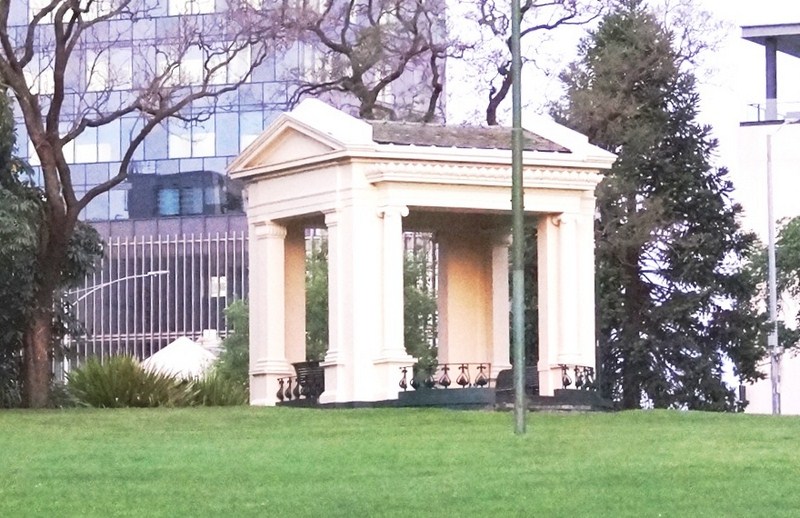 The old, square, Corinthian-style Bandstand, built adjacent to the Gipps Street entrance to the Gardens, is enclosed by a low iron fence. It was designed and erected by George Dodd in 1864 at a cost of 322 pounds.

Set within the garden are a visitor information center and cafe, a conservatory, Cooks’ Cottage, a model Tudor village, an ornamental lake, a scarred tree, tree-lined avenues, a band pavilion, a rotunda, the ” Ola Cohn’s Fairies’ Tree,” fountains and sculptures. 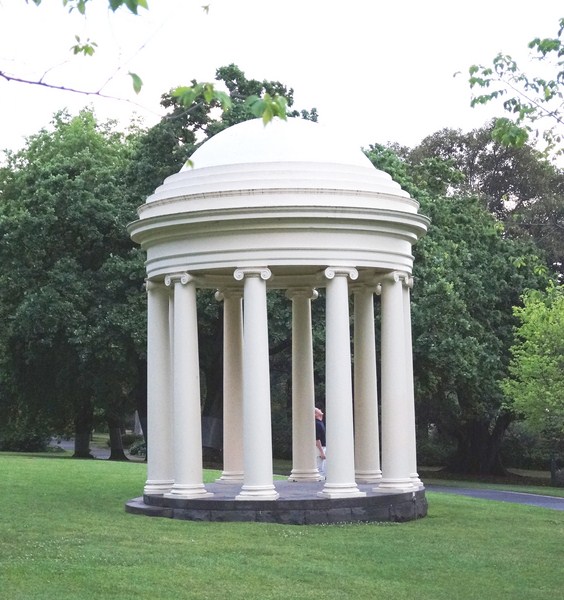 The “Temple of Winds,” a Neo-Classical rotunda, was built in 1873 by Thomas Julian and Co. at a cost of £275. The building consists of a domed concrete roof supported by ten Corinthian columns. 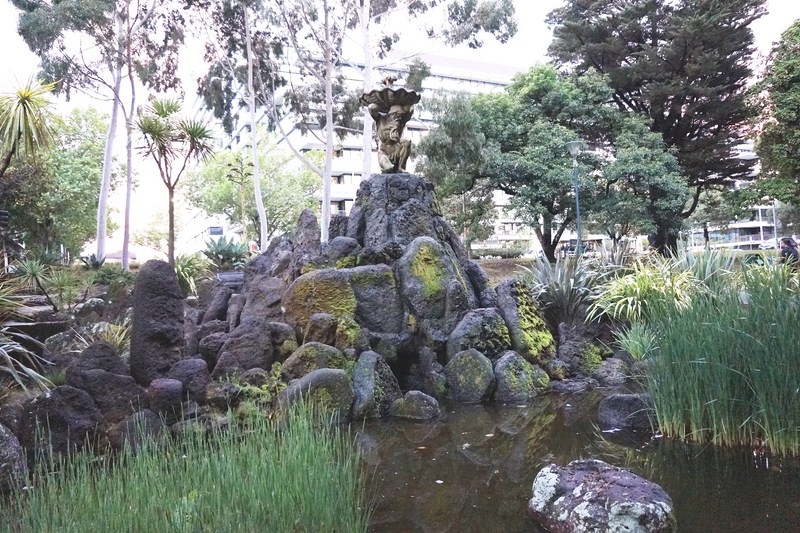 The River God Fountain, located at the north end of the gardens at the junction of paths facing south, was designed and cast in concrete by the sculptor, Charles Summers and was erected in the Fitzroy Gardens in 1862. Its central feature is a figure of a man on bended knee bearing an open clam shell on his shoulders.

The Ola Cohn’s Fairies’ Tree comprises a series of lovely carvings (fairies, dwarfs, gnomes, a marvelous jackass, koalas, flying foxes and a host of typical Australian animals and birds), done from 1931 to May 1934 (Victoria’s Centenary Year) by Miss Ola Cohn, on the stump of one of the original old red gum trees. 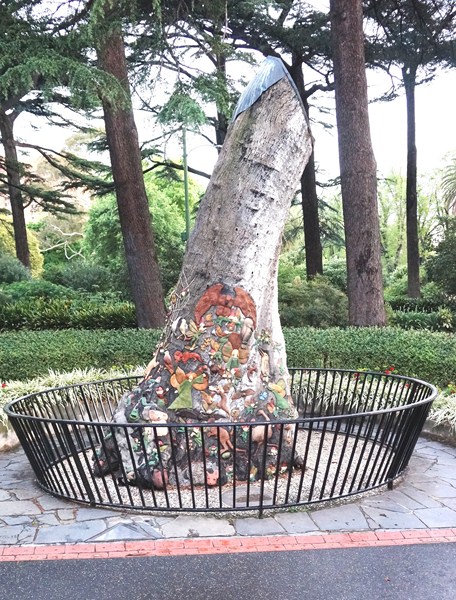 The trunk was extracted from the ground, in 1977, for chemical treatment and the removal of rotted wood. During the process, the mummified remains of an over 40 year old brush tail possum was found, perfectly preserved within the trunk. To prolong its life, the tree was remounted on a concrete base. 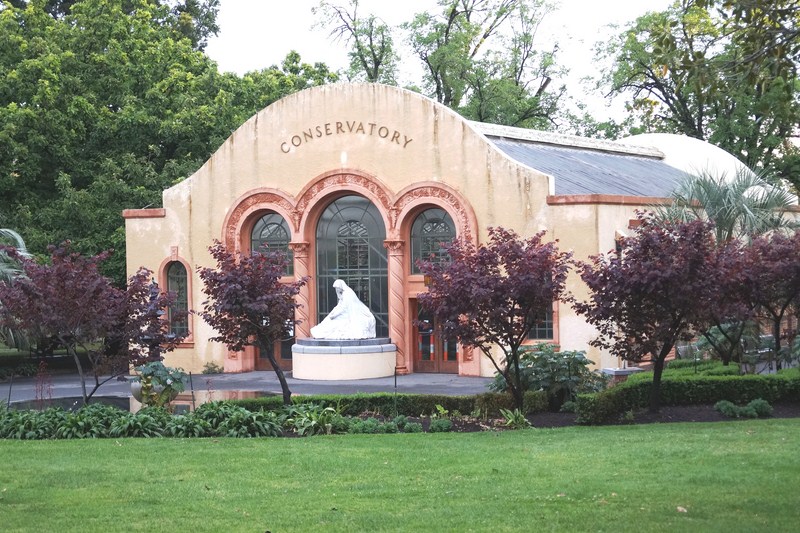 The Conservatory, one of Melbourne’s favorite tourist attractions, was opened on March 13, 1930 and provides 5 separate, spectacular floral displays each year.

The Conservatory Fountain (Boy with Serpent), a cast-iron ornamental fountain located near the rear entrance, features a snake coiled around the figure of a boy, atop a granite shaped ball.

Hydrangea and Fuchsias are in Display 1 (November – February); Tuberous Begonia and Gloxinia in Display 2 (February – April); Tropical and Poinsettia in Display 3 (April – July); Cineraria and Cyclamen in Display 4 (July – September); and Schizanthus and Calceolaria in Display 5 (September – November). 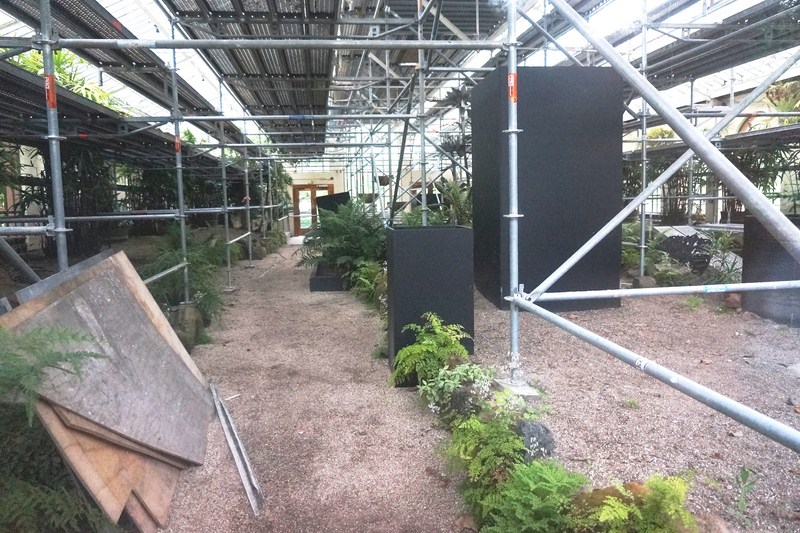 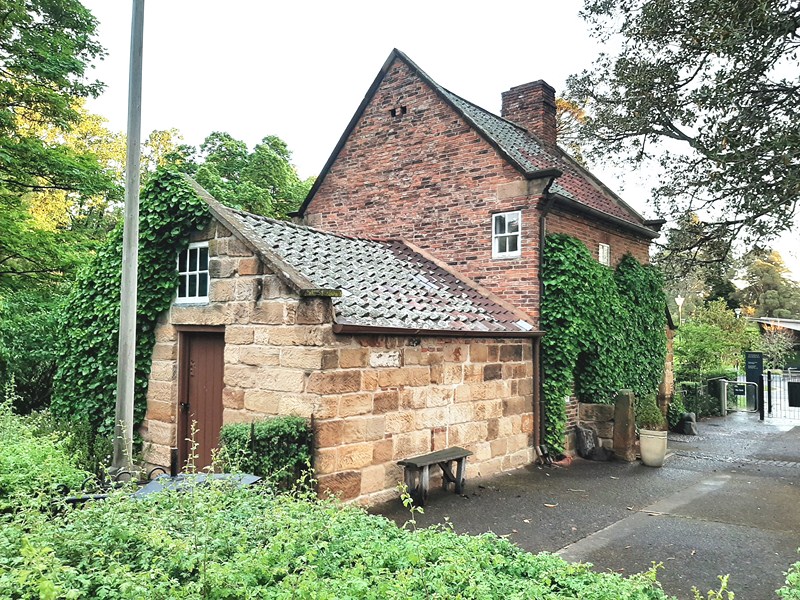 Cooks’ Cottage, which originally stood on an extremity of the village of Great Ayton, Yorkshire, England, was built, rebuilt or bought by Cook’s father in 1755. However, from the date 1755 and the initials of James and Grace (Cook’s mother and father) over the doorway, it is apparent that it is older than the rest of the cottage and it would seem that the cottage was rebuilt, and not originally built by Cook’s father when he bought it. 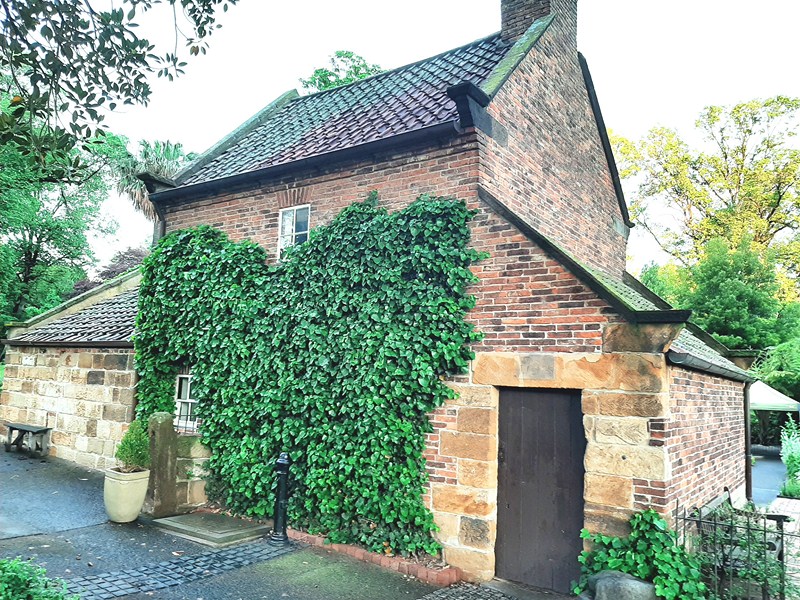 The Great Ayton family cottage is the only concrete historical link we have with Captain James Cook‘s origins (the original thatched cottage in which Cook was born at Marton-in-Cleveland was demolished in 1786) as it is possible that, during his boyhood years from 1736 until 1745, Captain Cook lived in the cottage. In the winter of 1771/72, on his return from the Australia voyage, he also spent some time with his father in the cottage. 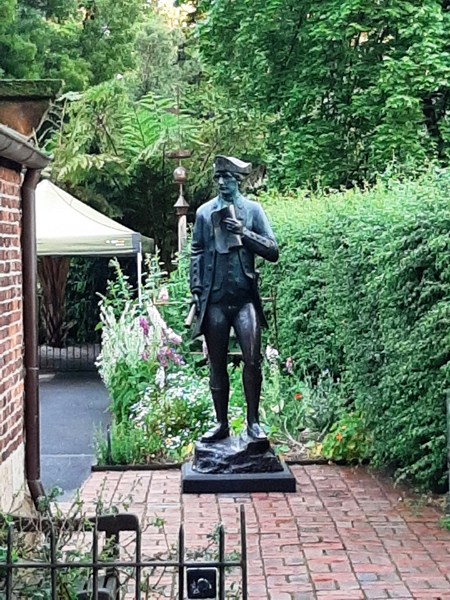 In 1933, the last owner of the cottage, Mrs. Dixon put the cottage up for sale and the prominent Melbournian Russell Grimwade agreed to buy the cottage and present it as a gift to the Victorian people as an ideal focus piece for Victoria’s centenary in 1934. Grimwade dismantled and shipped the cottage to Melbourne in 253 packing cases, arriving in April 1934. 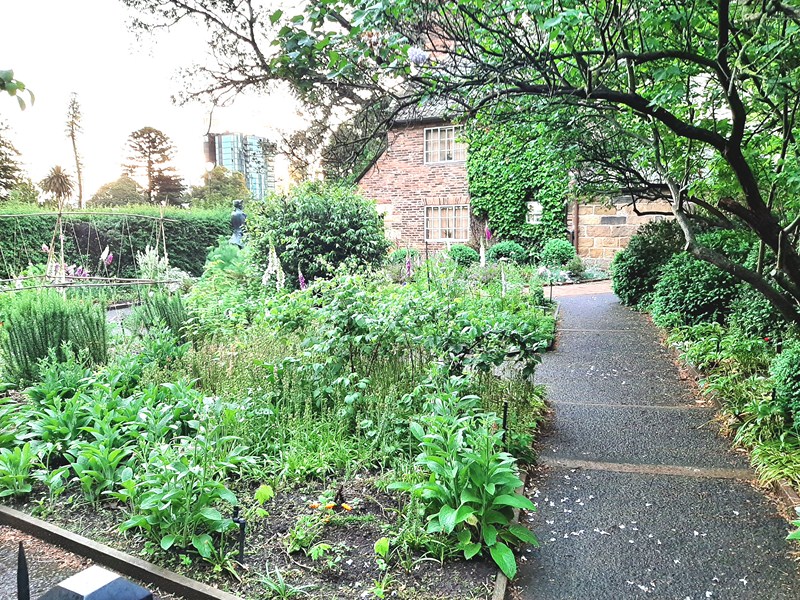 As research and guess work would permit, the cottage was accurately restored to its mid 18th century appearance and completed in six months.  A site in the Fitzroy Gardens, with its large shady European trees, was selected to complement the cottage. On October 15, 1934, during a centenary ceremony, the cottage was handed over to the Lord Mayor, H. Gengoult Smith by Russell Grimwade.  The cottage has undergone two restorations in the late 1950’s and the most recent in 1978.

The Village, situated in the center of the Fitzroy Gardens, was one of three such villages modeled in cement, as a hobby, by the 77 year old Mr. Edgar Wilson, a pensioner who lived in Hamilton Road, Norwood, London, England. In appreciation of Melbourne’s generosity in sending food to Britain during the World War II, one of them was presented to the City of Melbourne through the City of Lambeth, England and was officially opened, on May 21, 1948, by the Right Honorable Lord Mayor of Melbourne, Councilor Sir Raymond Connelly.

The delightful village, representing a typical Kentish village built during the “Tudor” period of English history, is composed of models of various thatched cottages, a village church, school, hotel, barns, stocks, pump, a scale model of Shakespeare’s home and Anne Hathaway’s cottage, and all public buildings. 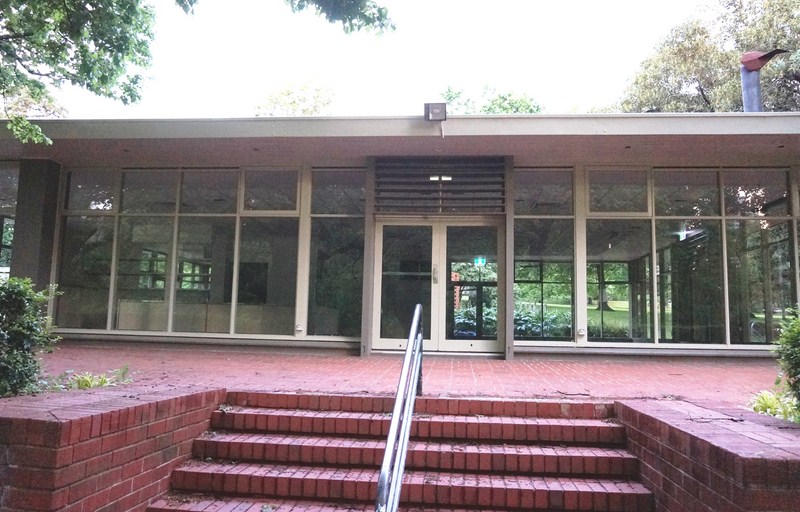 The Italian Romanesque-style, single storey Sinclair’s cottage, a polychrome brick gardener’s cottage located on the main Elm Avenue, was designed by Melbourne architect Francis Maloney White. It was built in 1866 by Thomas Crowson at a cost of 520 pounds. 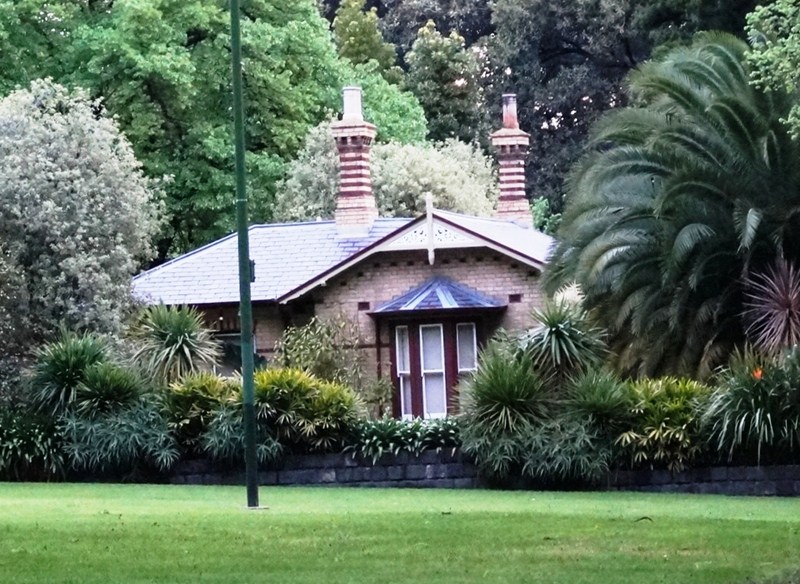 This house has a gabled entrance porch with overhanging eaves; walls of alternating cream and red brickwork (with cream as the dominant color) and two notable stripped chimneys, built in alternating red and cream brickwork courses, which dominate the roof. 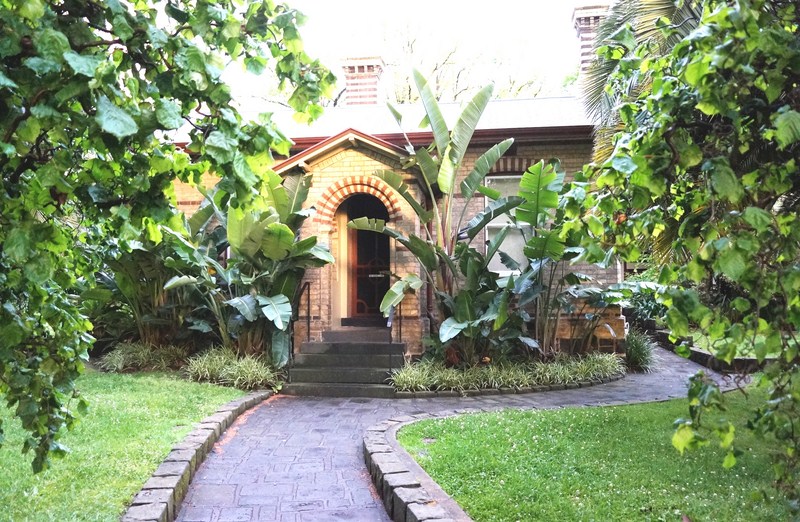 The stables at the back repeat, in a much simpler fashion, the fine details of the main house.

A café and visitor center provides tourism information about Melbourne as well as specific information and services for Cooks’ Cottage and Fitzroy Gardens. 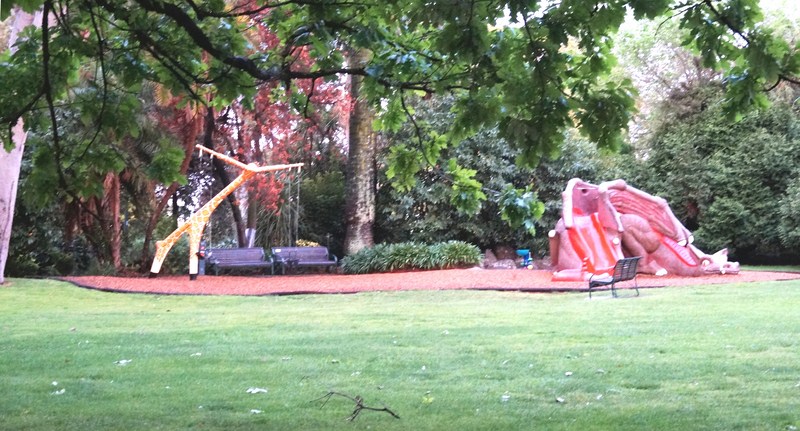 The Children’s Playground, located on the south side of the Grey Street herbaceous border, has a 20-ton sculpted concrete dragon as its centerpiece. The dragon is 7 m. long and 3 m. wide and was sculpted by Martin Moore, Gary Tippet and Aaron Beaucaire from Mothers Art. It was built using a steel frame with a reinforced concrete base.

This travel blog, a diary of the author’s local and international travels, aims to provide the reader with news and information on people, places and events that would interest the avid traveler and tourist. But, it also aims to be much more, providing insights on the wonders of this beautiful country, as well as the world, beyond the strict confines of the city. Have a BLAST seeing old churches, exotic temples, educational museums as well as palm-fringed islands; white sand beaches; thundering waterfalls; placid lakes; fiery sunsets; turquoise seas; cathedral-like caves; swirling rivers; majestic mountains; stupendous, amphitheater-like rice terraces; awesome volcanoes and the like. Get to know the movers and shakers in the tourism industry; find out where to titillate the palate; rejuvenate your body; feed your adrenalin, unwind and relax; satisfy your craving for history and culture; and find out what's being celebrated and where. 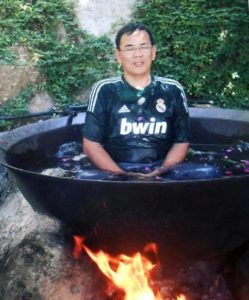 BENJAMIN “BENJIE” LAYUG, an architect by profession (he finished his B. S. Architecture degree from the University of the Philippines Diliman in 1982), is an avid reader, traveler and free-lance travel writer in his spare time, contributing articles to Travel Update, Philippine Daily Inquirer, COLORS, TODAY, 7107 Islands Magazine, Business Day, Bluprint and the Business Mirror.

He is also the author of the following travel books:

Now a senior citizen, he is probably one of the oldest, if not the oldest, active travel blogger in the country today. He also has a lifestyle blog called F.Y.I.:Firing Your Imagination (www.firingyourimagination.blogspot.com).  Benjie has traveled to two-thirds (53) of the country’s 81 provinces and over 20 countries in 4 continents. 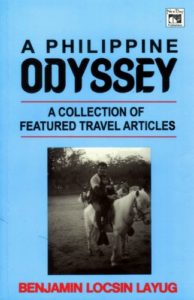 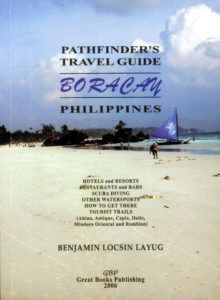 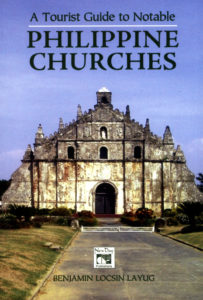 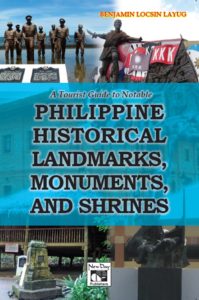 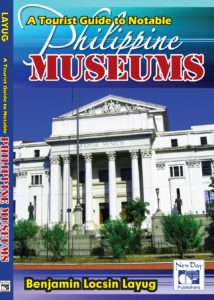