You have reached the cached page for https://www.rottentomatoes.com/m/forever_fever
Below is a snapshot of the Web page as it appeared on 7/20/2020 (the last time our crawler visited it). This is the version of the page that was used for ranking your search results. The page may have changed since we last cached it. To see what might have changed (without the highlights), go to the current page.
You searched for: fever movie 1999 We have highlighted matching words that appear in the page below.
Bing is not responsible for the content of this page.
That's the Way I Like It (Forever Fever) (1999) - Rotten Tomatoes
Home
Top Box Office
Tickets & Showtimes
DVD & Streaming
TV
News 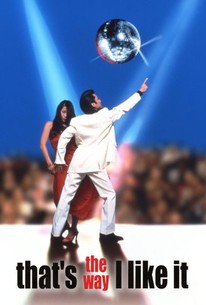 That's the Way I Like It (Forever Fever) Ratings & Reviews Explanation

Glen Goei made his directorial debut with this Singaporean musical comedy in Singlish and Hokkien dialogue. In 1977, laidback Hock (Adrian Pang), always on the brink of getting fired from his supermarket job, hopes to buy a Triumph motorcycle. He lives with his parents, sister Mui (Pam Oci), and brother (Caleb Goh). After seeing a movie titled Forever Fever with a John Travolta look-alike (Dominic Tace), Hock gets inspired. To raise money for the Triumph, Hock takes dance lessons in order to enter a disco competition with a cash prize. Mei (Medaline Tan), who secretly loves Hock, goes with him to his lessons. Hock falls hard for another dance entrant, Julie (Anna Belle Francis), which does not please her boyfriend, Richard (Pierre Png). Some anachronisms are evident in the use of modern Singapore for period location scenes.

Jerrold Wong
as Tranny No. 2

Moe Kassim
as Tranny No. 3

Jacqueline Pereira
as Ticket Seller No. 2

Michelle Chua
as Ticket Seller No. 3

Najip Ali
as Can Thrower

Irwan Bin Usop
as Gangster No. 1

Teo Kuan Soon
as Gangster No. 2

Lee Frederick
as Tranny No. 4

Leroy Bakar
as Tranny No. 5

Teri-Anne Lee
as Cashier No. 1

Juliana Abdul Ajis
as Cashier No. 2

Jonathan Goh
as Schoolboy No. 1 on Motorbike

Critic Reviews for That's the Way I Like It (Forever Fever)

Audience Reviews for That's the Way I Like It (Forever Fever)

There are no featured audience reviews for That's the Way I Like It (Forever Fever) at this time.

That's the Way I Like It (Forever Fever) Quotes