You have reached the cached page for https://pagesix.com/article/pregnant-celebrities-2021/
Below is a snapshot of the Web page as it appeared on 5/8/2021 (the last time our crawler visited it). This is the version of the page that was used for ranking your search results. The page may have changed since we last cached it. To see what might have changed (without the highlights), go to the current page.
You searched for: emma stone pregnant We have highlighted matching words that appear in the page below.
Bing is not responsible for the content of this page.
Pregnant celebrities 2021: Stars expecting a baby this year Skip to main content 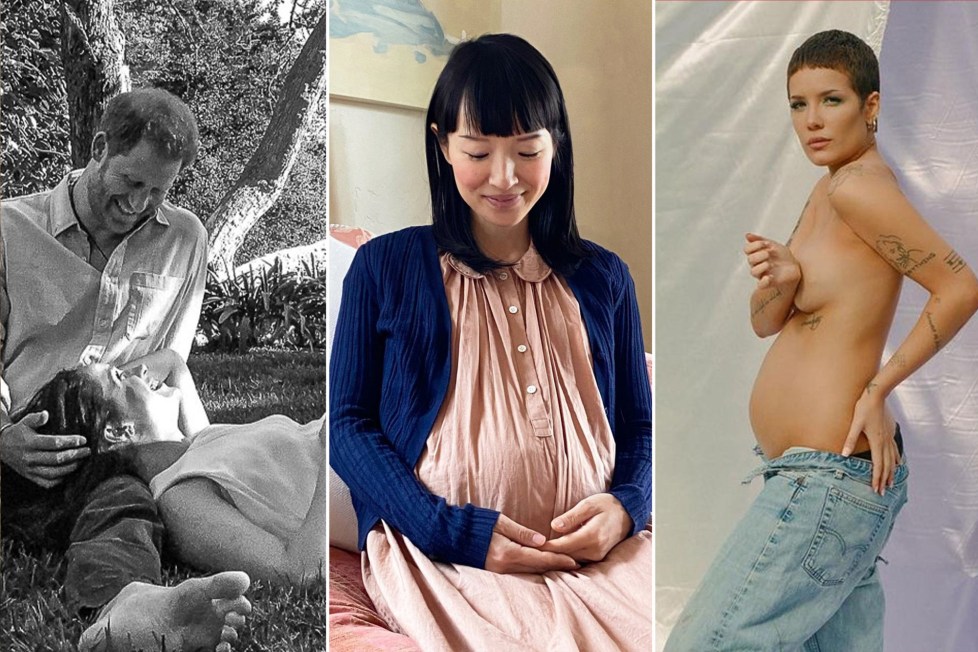 Pregnant celebrities 2021: All the stars expecting a baby this year

Amid all the difficulties of the past year, these celebrities have something to celebrate: a new baby. See which stars are expanding their families this year.

“Boy Meets World” alum Danielle Fishel has another baby boy on the way. The actress confirmed on her 40th birthday in May that she and husband Jensen Karp are expecting their second child together.

The couple has been married since 2018 and welcomed their first child, son Adler, in June 2019.

A Little Mix member has a little bun in the oven.

Leigh-Anne Pinnock announced she is expecting her first child with fiancé Andre Gray by posting a stunning photo shoot to Instagram.

“We’ve dreamed about this moment for so long and we can’t believe the dream is finally coming true… we can’t wait to meet you,” the singer captioned the slideshow.

The couple got engaged last May after four years together.

Amber Stevens and Andrew West announced in April that they’re expecting their second child together, due in the summer.

“While in NY shooting @runtheworldstarz I was also working on another project and in the early morning of Nov 22, @andrewjwest birthday, we confirmed that second project was a success!” Stevens captioned a slideshow of pics with West and their 2-year-old daughter Ava.

“Below Deck Sailing Yacht” star Dani Soares revealed in late April that she had a baby on board. “It’s just you and I little baby,” she captioned a bump-baring underwear photo on Instagram.

Josh and Anna Duggar are expecting baby No. 7.

“It’s a GIRL!!!!!” Anna captioned a video announcing the news. “We are overjoyed to announce baby seven is on the way and we can’t wait to hold her in our arms this fall!”

The couple have yet to announce a name, but it’s likely they’ll continue their tradition of “M” names with their seventh child. Their first six children are Mackenzie Michael, Marcus, Meredith, Mason and Maryella.

Ronda Rousey announced in April that she’s pregnant and expecting her first child. The WWE star and former UFC champion shared the news in a video on her YouTube channel with husband Travis Browne.

“Queer Eye” star Tan France announced in April that he and his husband, Rob France, are expecting their first child.

“So happy to finally share that WE’RE HAVING A BABY!” Tan, 37, wrote on Instagram alongside a photo of himself with an ultrasound crudely superimposed over his bare stomach.

Abby De La Rosa announced on Instagram that she and Nick Cannon are expecting twin boys.

“Thank you for choosing me to be your Mommy. I know the Lord has destined me and prepared me for the gift of not one but two little angels,” she captioned a photo from her maternity shoot.

The reality star took to Instagram to share the news, posting a photo of four positive pregnancy tests, as well as a sonogram.

“Well the secret is out for everyone to know now!!,” she wrote. “Baby Efird #2 coming 2021 ❤️. After almost 3 years we are finally having another blessing and couldn’t be happier. 🥳🙏🏼😊🥰 @official_josh_efird.”

The pregnant mother of two announced the news via Instagram, adding that she’ll be documenting much of her pregnancy journey on OnlyFans.

“Subscribe if you wanna ride along for the full experience (& love pregnant bodies as much as I do),” she told fans online.

Kara Keough, daughter of “Real Housewives of Orange County” alum Jeana Keough, announced in early April that she and husband Kyle Bosworth are expecting a baby.

The couple, who are also parents to 5-year-old daughter Decker, shared the news nearly one year after the death of their infant son McCoy.

And baby will soon make four for Kirsten Dunst and Jesse Plemons. The actress announced her second pregnancy in late March on the cover of W Magazine.

Dressed in Rodarte that covered her growing baby bump, Dunst quipped of the shoot: “Every shot was on the floor. I was like, ‘I can’t get up.’ I felt like Urkel.”

Dunst and Plemons announced their engagement in 2017 and welcomed their first child, son Ennis Howard, a year later.

The “Ridin’ Solo” crooner, who met Frumes at Equinox right before quarantine, previously teased to Page Six that his niece was starting to give him “baby fever.”

“This was not supposed to happen this way, but it’s just so eerie and cosmically funny that it has,” the expectant mother said about the timing of her pregnancy and the film.

This is the first child for both Glazer and Rooklin, who quietly tied the knot in 2017.

In March, Granger Smith and his wife Amber said they are expecting a baby boy nearly two years after their 3-year-old son, River, died in a tragic accidental drowning.

Gal Gadot confirmed her third pregnancy via Twitter the day after she appeared in a flowing Givenchy dress at the 20201 Golden Globes virtual ceremony on Feb. 28.

“Here we go again,” she captioned a sweet family snap with her husband, Yaron Varsano, and their two daughters, Maya and Alma, cradling her baby bump.

British singer Ellie Goulding is pregnant with her first child with husband Caspar Jopling. Goulding announced the news in Vogue in February.

“The thought of getting pregnant didn’t seem like it could be a reality,” she told the magazine. “Becoming pregnant kind of made me feel human.”

“Teen Mom OG” star Catelynn Lowell announced in February that she’s pregnant and expecting her fourth child with Tyler Baltierra, months after she revealed the couple had experienced a pregnancy loss.

“This rainbow was worth the storm,” Catelynn wrote alongside an Instagram photo of daughters Novalee and Vaeda. “Baby Baltierra coming soon.”

Lowell and Baltierra’s eldest daughter Carly was adopted by Brandon and Teresa Davis in 2009; the families keep in touch.

Ne-yo and Crystal Smith are expecting their third child together.

“Overjoyed to announce……the family is expanding…!” Ne-Yo wrote on social media in February.

The couple announced that Crystal is pregnant again after they reconciled their relationship during their coronavirus quarantine following a brief breakup.

Ne-Yo and Smith have two sons together, Shaffer and Roman. The “Let Me Love You” crooner also shares two children with his ex Monyetta Shaw.

Jessa Duggar announced in February that she is pregnant with baby No. 4.

She and husband Ben Seewald also revealed that she suffered a pregnancy loss last year.

“After the heartbreaking loss of a baby last year, we’re overjoyed to share that another little Seewald is on the way!” the couple said through TLC.

“Selling Sunset” star Christine Quinn is going to be a mom.

In February, the Netflix personality confirmed she’s pregnant and expecting her first child with husband Christian Richard. The couple tied the knot in December 2019.

After suffering a miscarriage in July 2020, Meghan Markle and Prince Harry announced on Valentine’s Day that they’re expecting their second child.

“The Duke and Duchess of Sussex are overjoyed to be expecting their second child,” a spokesperson for the couple told Page Six.

They announced the news with an intimate black-and-white photo. Their son Archie was born in May 2019.

Tennis star Caroline Wozniacki revealed via Twitter that she and hubby David Lee will be welcoming their first child — a baby girl — June 2021.

“The Hills” star Jason Wahler and his wife, Ashley, announced in February that they’re prepping for their second child. “The newest addition to our family is coming June 2021!” they both captioned a snap holding up a sonogram. They already share a daughter named Delilah.

Marie Kondo sparked some joy when she announced she’s expecting baby No. 3 with her husband, Takumi Kawahara. She and Kawahara have two young daughters, Satsuki and Miko.

Halsey surprised everyone in January when she announced she was expecting her first child. She posted photos baring her baby bump and tagged Alev Aydin, who many believe to be the father of her child.

Shawn Johnson and Andrew East, who are the parents of young daughter Drew Hazel, revealed in January that Johnson has another bun in the oven. The Olympic gold medalist said she and East began trying for another child immediately after their little girl’s birth in November 2019, which followed a miscarriage.

Nick Carter and wife Lauren Kitt Carter announced in January that they have another baby on the way — which came as a total shock to the couple. The Backstreet Boy and the actress — who are the parents of son Odin and daughter Saoirse — told People they’ve gone through “multiple miscarriages” over the years and never expected to conceive naturally again.

“Smallville” actor Tom Welling and his wife, Jessica Rose Lee, confirmed in January that they have a second child on the way. They welcomed son Thomson Wylde Welling in 2019.

Famously private star Emma Stone stepped out in the new year with a surprise. In January, the “La La Land” actress was photographed showing a baby bump while out in Los Angeles.

She and former “SNL” segment director Dave McCary secretly tied the knot in 2020 after their scheduled wedding had to be postponed due to the ongoing coronavirus pandemic.

Country crooner Elle King joyfully announced on Instagram that she and her fiancé Dan Tooker are expecting.

“You see this miracle baby comes after two very big losses,” the, “Another You” singer wrote adding, “What women go through on this journey make us nothing less than WARRIORS. So thank you for your prayers and love for our high-risk pregnancy!”

King is the daughter of “SNL” alum Rob Schneider.