You have reached the cached page for https://www.tuko.co.ke/324153-emma-heming-age-height-wedding-children-net-worth.html
Below is a snapshot of the Web page as it appeared on 1/18/2021 (the last time our crawler visited it). This is the version of the page that was used for ranking your search results. The page may have changed since we last cached it. To see what might have changed (without the highlights), go to the current page.
You searched for: emma heming We have highlighted matching words that appear in the page below.
Bing is not responsible for the content of this page.
Emma Heming age, height, wedding, children and net worth ▷ Tuko.co.ke

a year ago read comments by  Caiaphas Wanjala

Emma Frances Heming is a renowned model, actress, and charity promoter who achieved success at a tender age. Emma is arguably one of the talented fashion models in the world, with extensive experience collaborating with some of the reputable fashion brands. In 2005, Maxim Magazine ranked Emma Heming #86 on its "Hot 100" models. 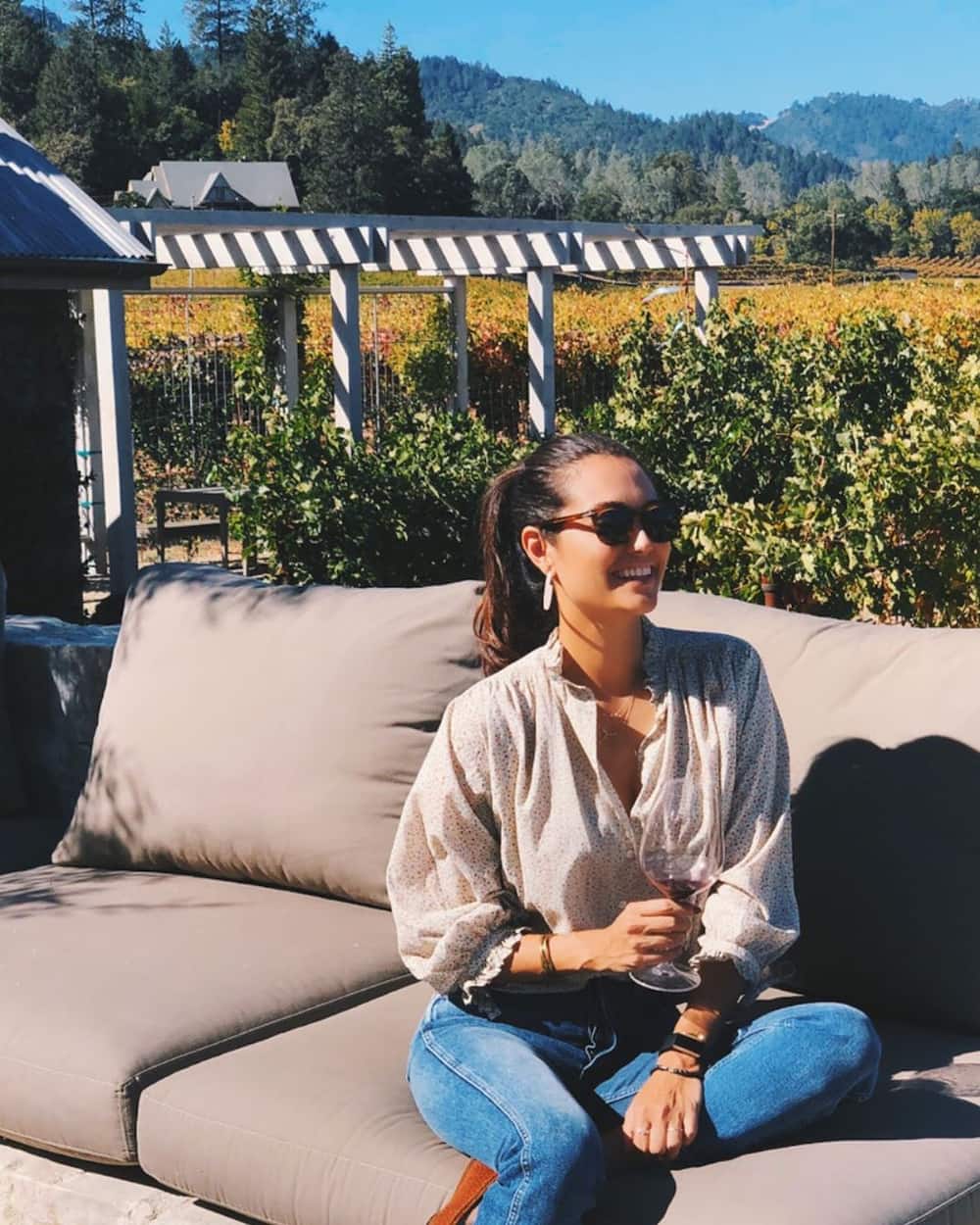 In the course of her modeling career, Frances has appeared in multiple advertising campaigns across the globe. John Frieda, GAP, Escada, Dior Bronze, Intimissimi, Garnier, Redken, and Palmers are some of the ads Emma has featured that has caught the attention of many. Further fueling her prominence in the limelight was her marriage to one of the wealthiest actors in the world. To date, people are eager to know about this attractive model.

Frances Heming's father was English, and her mother was Guyanese called Zorina Heming. Emma grew up in North London, Her father's native land, but later relocated to Southern California, US, with her mother after her parents separated. This was closer to her mom's family, and they stayed there until Emma completed school.

At a young age of sixteen, Emma took part in a Supermodel contest organized by Lorraine Ashton Modelling Agency, "The British Elle Supermodel" emerging the winner. Her mother is the one who entered her into the competition. This was the beginning of her profession as a model and has since worked for top fashion and fragrance designers like Valentino, Christian, Dior, Ralph, Gucci, Lauren, and Chanel, to name a few.

Besides, she has walked several runways, appeared in magazines, billboards, and ads promotions all over the world. Other than modeling, Emma is also an actress, and she has appeared in four films as well as one TV show.

Francesca from Too Hot Too Handle: age, ethnicity, family, background 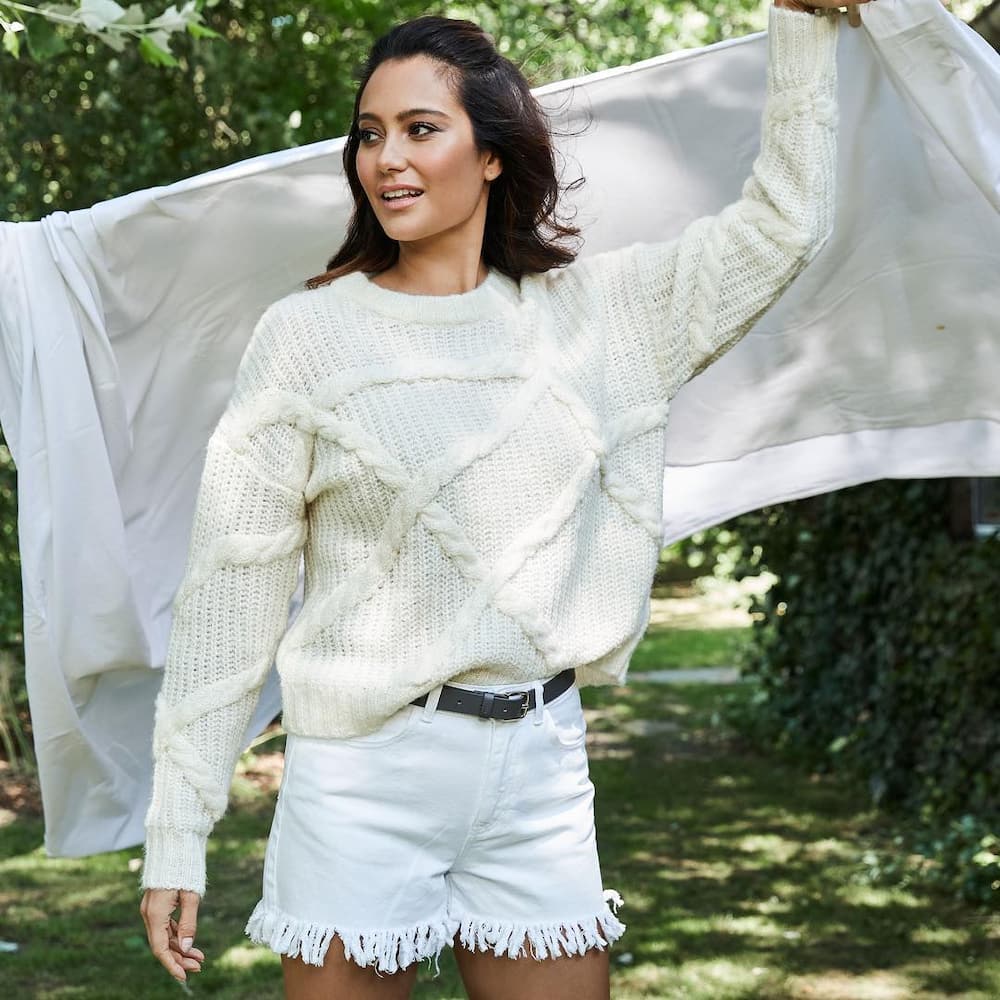 What is Emma Heming height? The supermodel is blessed with a killer physique. She is 5 feet and 10 inches (1.78 meters) tall with a corresponding weight of 53 kg (116.84lbs). Besides, Emma has chestnut looking eyes with dark chestnut hair.

When did Bruce Willis get married?

Moving on to her personal life, Emma Heming is married to the love of her life Bruce Willis. The two met back in 2007 at the gym as they shared the same instructor who introduced them, and the rest, as they say, is history.

After dating for three years, Bruce and Emma tied the knot on the 21st of March 2009 at the Turks and Caicos Islands. They had to repeat the marriage ceremony six days later in Beverly Hills, California, as the previous one was not legally binding. 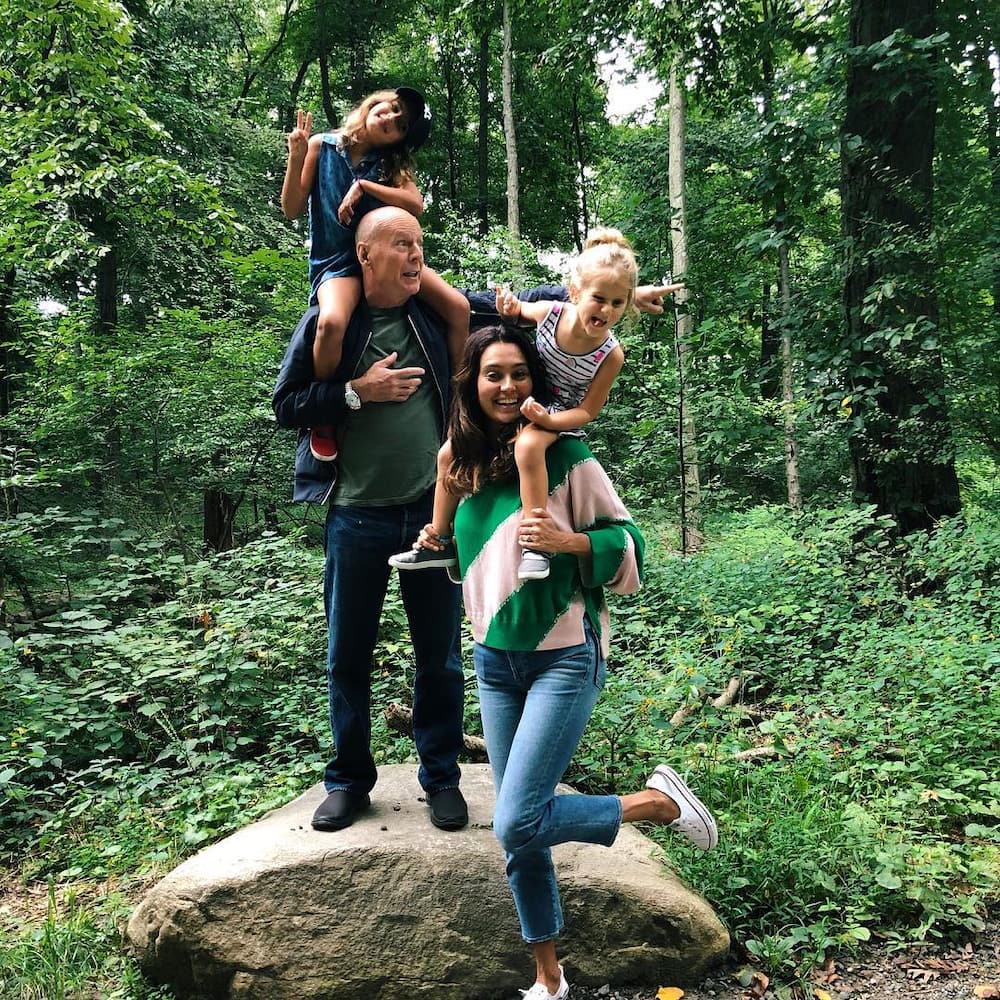 Is Bruce Willis still married to Emma Heming? Bruce Willis and Emma Heming have a considerable age gap difference of 23 years. Despite this, Mrs. Willis says she knew Bruce was the man for her when they first met. Before the couple met, Emma had not been married before and did not have any kids. Willis and Heming celebrated their tenth marriage anniversary in March 2019 with a vow renewal ceremony. It seems the two are still very much in love with no likelihood of a divorce or separation.

To mark their 10th year in marriage, Bruce and his wife renewed their wedding vows in a ceremony organized at the beach. Bruce Willis Ex-wife Demi was also in attendance. Below are images from the vow renewal from Emma Heming Instagram Account. 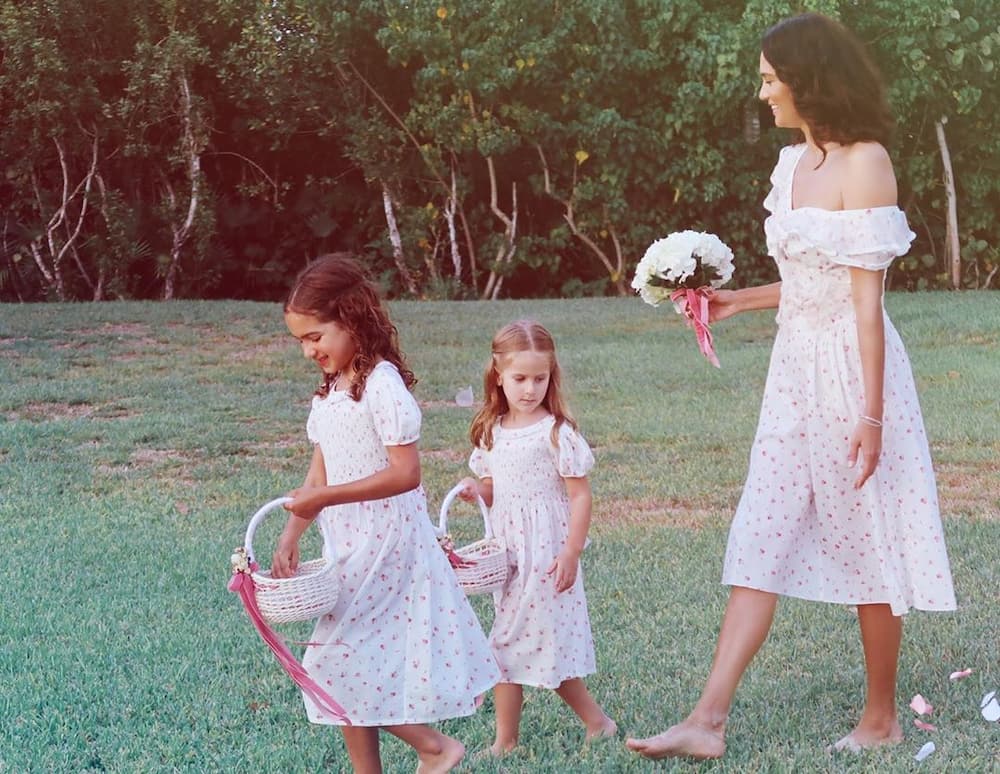 Emma Heming children, Mabel and Evelyn, were the flower girls at the vow renewal ceremony. Bruce and his wife sealing their wedding vow renewal with a kiss. Heming posted the picture on Instagram and captioned it, "We said, we do, again, ten years later, #happyanniversarymylove." 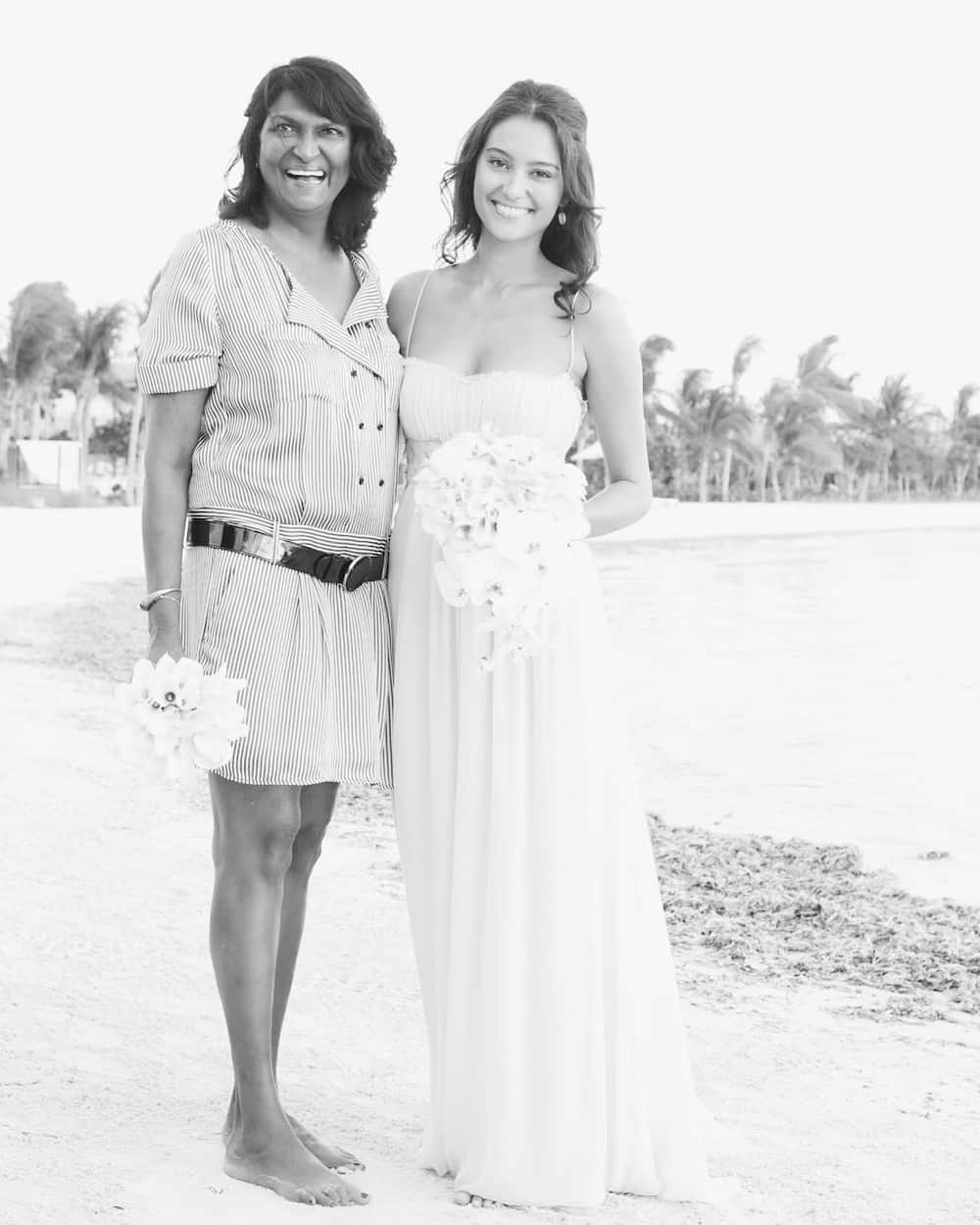 This is a picture of Zorina Heming and Emma during her first wedding to Bruce. Mrs. Willis posted the image to wish her mother a happy birthday, and she thanked her for always supporting her throughout. 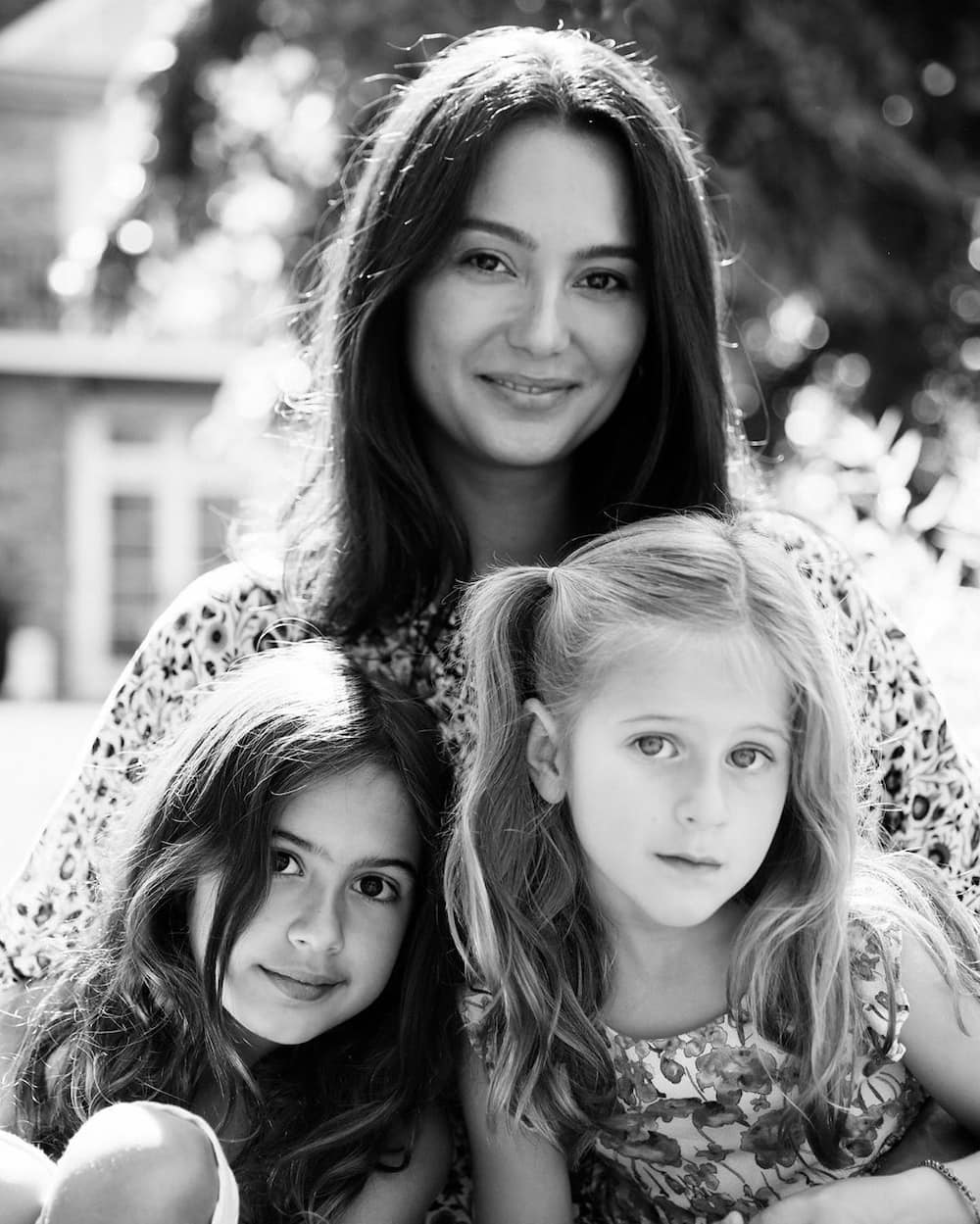 Bruce and Emma have two adorable children together, Mabel Ray Willis, born in 2012, and Evelyn Penn Willis, born in 2014. Besides, Emma is the stepmother to Bruce's three daughters that he had during his first marriage. Who was Bruce Willis married to? Bruce's first wife was Demi Moore, and they had Rumer Willis in 1988, Scout Willis in 1991, Tallulah Willis in 1994. Their divorce was finalized in 2000. Even though they are no longer together, the two are great co-parents, and Bruce was in attendance at Demi's marriage to Ashton Kutcher in 2005.

Grace Msalame: Everything you wanted to know about the beautiful TV host

Emma and Demi also have the best relationship. During Demi's birthday on the 11th of November 2018, Mrs. Willis wished her a happy birthday and expressed her gratitude for calling her family. Here is the picture. 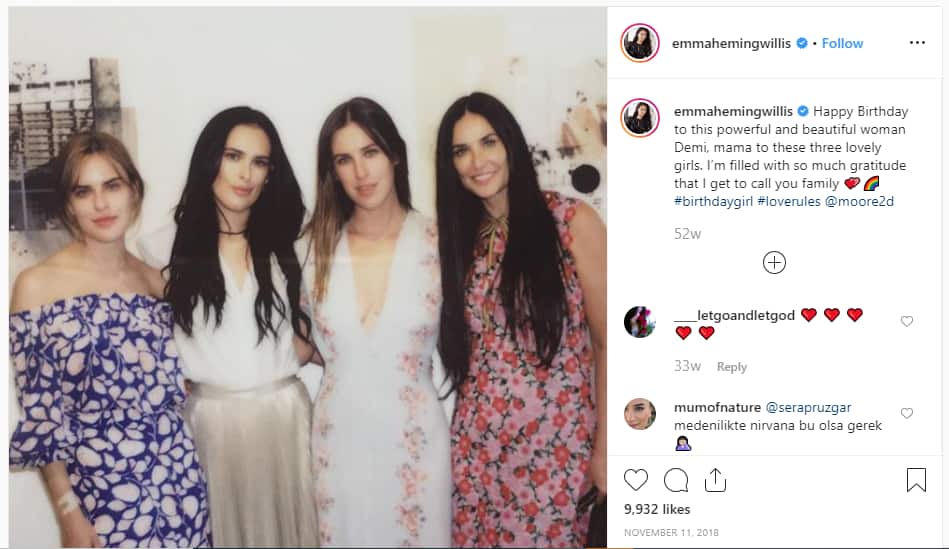 Bruce Willis's wife's net worth is reported to be $5 million. This is wealth she has accumulated from her modeling occupation as she was one of the most sought after models working with top brands in the fashion industry. Besides modeling, she has also acted in several films, two of which she appeared alongside her husband. The first movie Emma filmed with her spouse was Perfect Stranger (2007), with the second one being Red 2 (2013).

How much is Bruce Willis worth? Bruce Willis's net worth is estimated at $180 million, making him one of the richest male actors in Hollywood.

Currently, Emma devotes her time and money to assist the less privileged in the society. She is the ambassador of "Room to Grow", a non-profit company that aids needy children by giving them opportunities that improve their social standing.

Emma Heming is beautiful, and there is no denying it. Her beauty and charm have won millions of hearts. Besides, she is not only pretty but also brainy making her the complete package. We also cannot believe how amazing she looks at 41 years and after two babies. Catch up with Emma Heming Willis on her Instagram.