You have reached the cached page for https://allthatsinteresting.com/madeleine-mccann
Below is a snapshot of the Web page as it appeared on 1/17/2022 (the last time our crawler visited it). This is the version of the page that was used for ranking your search results. The page may have changed since we last cached it. To see what might have changed (without the highlights), go to the current page.
You searched for: disappearance of madeleine mccann suspects parents today We have highlighted matching words that appear in the page below.
Bing is not responsible for the content of this page.
Inside Madeleine McCann's Disappearance That Remains Unsolved Today

What Happened To Madeleine McCann? Inside The Three-Year-Old’s Chilling Disappearance

The disappearance of Madeleine McCann in 2007 continues to baffle detectives 13 years later. Here's what happened the night she vanished — and where the case stands today.

When she was three years old, Madeleine McCann vanished into thin air. The little British girl disappeared from her family’s hotel room in Portugal in 2007. The confounding incident has since become “the most heavily reported missing-person case in modern history.”

There were no signs of forced entry or any rational explanation as to how it happened. Over the following weeks, theories ranged from an abduction by a stranger to Madeleine’s own parents covering up her accidental death. A child sex-trafficking ring also entered the discussion.

Four months after her disappearance, the Portuguese police classified her parents Kate and Gerry McCann as formal suspects. However, that designation was later lifted due to lack of evidence. The incident soon became international in scope, with authorities and publishers from around the world entering the fray and offering opinions.

Scotland Yard opened its own inquiry in 2011, while the Portuguese police continued to explore new theories. In the meantime, the British media spectacle surrounding this story was paralleled only by the death of Princess Diana. Even the Tottenham Hotspurs got involved — by wearing Madeleine McCann t-shirts before a major soccer game. 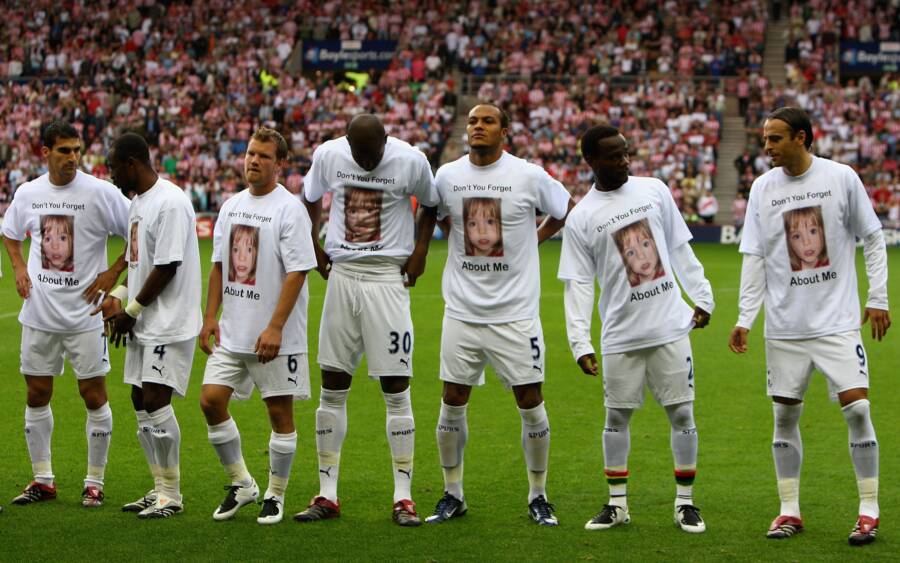 Clive Brunskill/Getty ImagesPlayers of the Tottenham Hotspurs lined up in Madeleine McCann shirts before a Barclays Premier League match against Sunderland at the Stadium of Light. August 11, 2007. Sunderland, England.

Some people, among them former detectives, have called the case “unsolvable” as recently as January 2020. Too much time has elapsed. There are too many holes in too many stories. Crucial CCTV cameras were strangely not turned on when they normally should’ve been.

With a flurry of conspiracy theories added on top of all that, it’s possible that Maddie — who would be 16 years old today — might truly be gone for good.

Here’s what we do know.

When Did Maddie McCann Go Missing?

In 2007, Kate and Gerry McCann took their children — three-year-old Madeleine and her two-year-old twin siblings — on vacation at a resort in Praia da Luz (“Beach Of Light”) in Portugal.

The apartment they rented was on the ground floor. 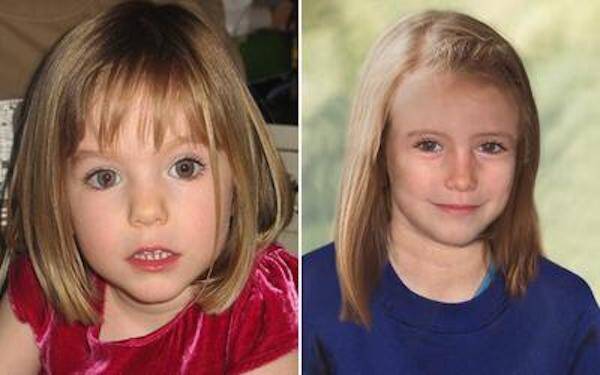 Wikimedia CommonsOn the left is Madeleine McCann at age three. The image on the right is an age-progressed depiction of how she may have looked at age nine.

Madeleine McCann vanished from that very room on the night of May 3, 2007, when her parents left to have dinner with friends at a tapas restaurant at 8:30 p.m. They left the girl and her siblings in the room as they slept.

It was only later that the McCanns recalled Maddie asking over breakfast that morning: “Why didn’t you come when [my brother] and I cried last night?” This led them to believe that someone uninvited may have been in the room — perhaps more than once. 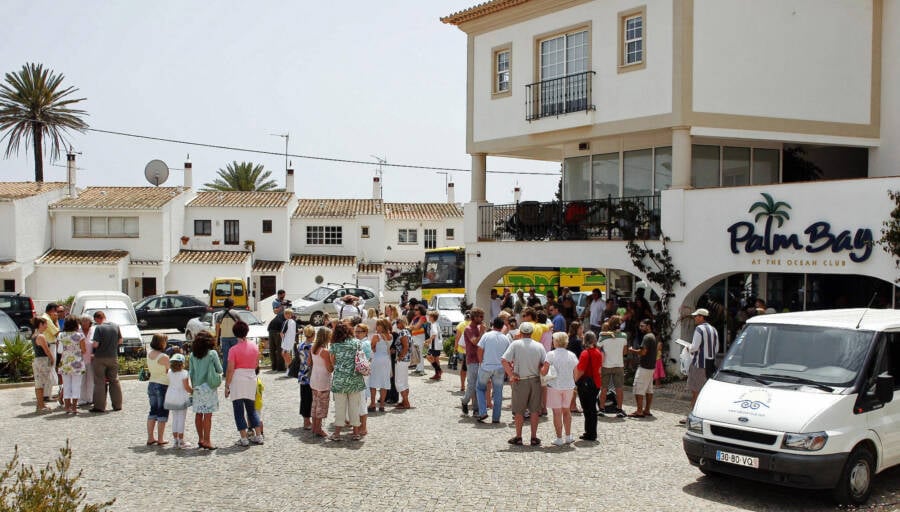 With the restaurant being so close to the apartment, the McCanns checked on their kids throughout dinner. It was 10 p.m. when Kate McCann noticed her daughter was missing. From that point on, their lives would never be the same.

Madeleine hasn’t been seen since.

The Disappearance Of Madeleine McCann

One of the first suspects in Madeleine’s disappearance was a 33-year-old man named Robert Murat. The British-Portuguese real estate consultant lived near the McCann’s apartment. And around 9:15 p.m. that night, a man had been seen walking in the direction of Murat’s home — carrying a child.

Of course, at the time, nobody knew Madeleine was even missing, or that the child being carried might’ve been her. As it turned out, no solid evidence linked Murat to the case — and his status as a suspect was later lifted. 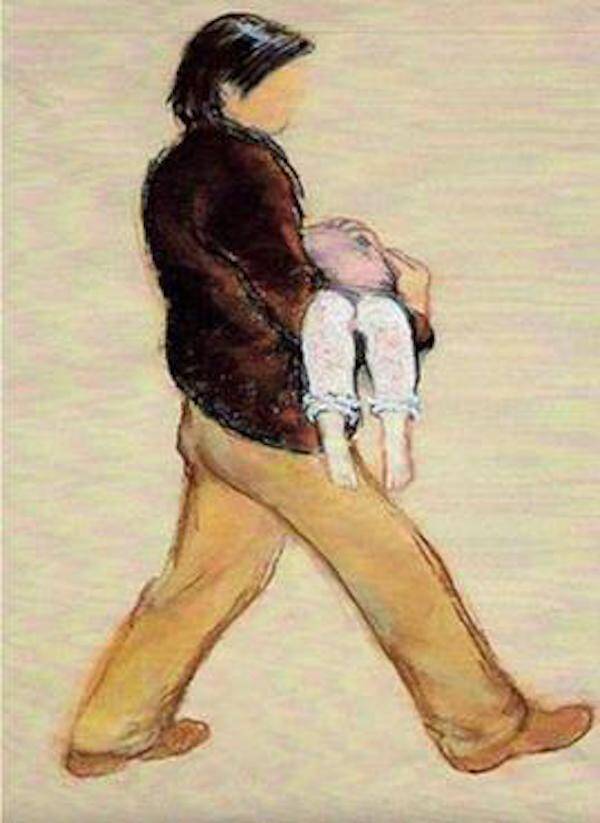 Four months after Madeleine’s disappearance, Portuguese police added Madeleine’s parents to their list of arguidos, or suspects. Some cops believed the girl had died in their apartment, and that the supposed child abduction was entirely fabricated to cover up her death.

While that might sound pretty harsh to parents whose child had been lost for a distressing amount of time, authorities did have their reasons to consider them as possible suspects. Apparently, two sniffer dogs had been brought to the scene by British police in July 2007.

One canine was trained specifically to detect human blood — the other, the scent of dead bodies.

The animals were walked through numerous locations, but only alerted their officers inside the family’s apartment — and while inside the Renault Scenic hire car that the McCanns rented 24 days after their daughter went missing.

Authorities thus theorized that Gerry and Kate McCann may have hidden their daughter’s corpse, faked the abduction, and placed the body into the car weeks later. With the body yet to be discovered, police believed the two adults concealed the corpse in an undetermined location. 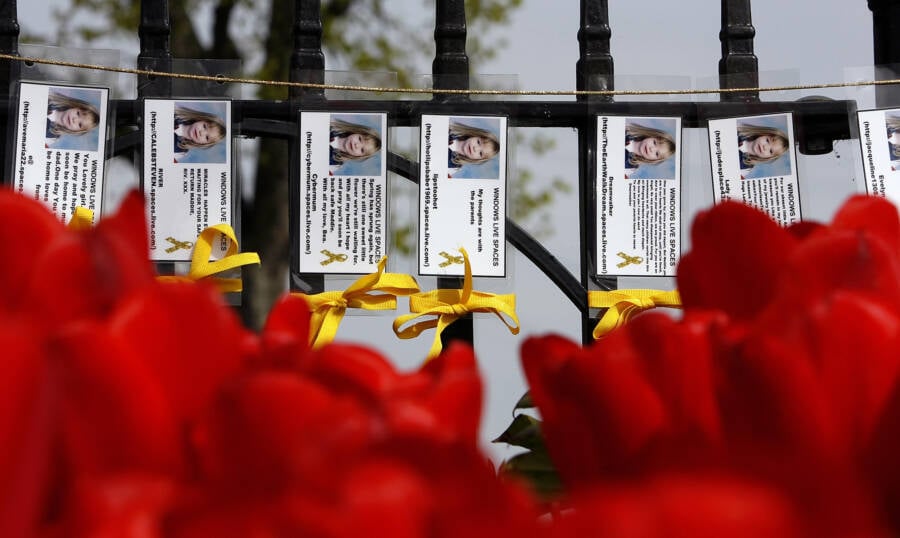 Leon Neal/AFP/Getty ImagesRibbons and messages tied to a fence in Madeleine’s hometown of Rothley, Leicestershire, on the day of the first anniversary of her disappearance.

As for the motive behind this cold-blooded act the McCanns were being accused of, it was quite mundane: an accident and the consequent fear of prison. The theory argues that Gerry and Kate McCann — who were both doctors — gave their daughter too much sedative to sleep.

While a seemingly harmless solution to garnering an uninterrupted dinner with adults, the medication supposedly killed Madeleine — leaving her terrified parents desperate to stay out of jail. Ultimately, it was the hair and fiber analysis from the car and the apartment that led authorities to label the parents as suspects.

However, sniffer dog evidence is rarely airtight. One U.S. court case saw a judge agree with analysis of three dogs’ performances that found they were incorrect 78 percent, 71 percent, and 62 percent of the time. The DNA analysis, however, was a little more convincing.

John Lowe of the U.K.’s Forensic Science Service (FSS) said 15 out of 19 components of Madeleine’s DNA profile were found in the hire car. Nonetheless, this still came with caveats large enough to offer some reasonable doubt. 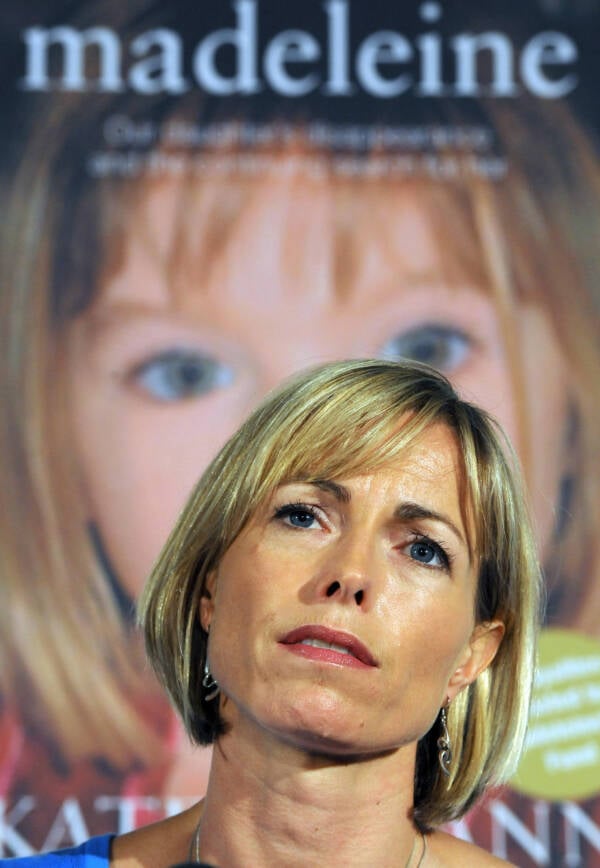 Anthony Devlin/PA Images/Getty ImagesKate McCann speaks at a publishing event in London for her book on Madeleine’s disappearance.

“It’s important to stress that 50 percent of Madeleine’s profile will be shared with each parent,” he said. “It is not possible, in a mixture of more than two people, to determine or evaluate which specific DNA components pair with each other… Therefore, we cannot answer the question: Is the match genuine, or is it a chance match?”

Kate and Gerry McCann had their suspect status removed in July 2008. They described the early suspicion of them as “ludicrous.” Meanwhile, they still hold out hope to this day — nearly 13 years after the disappearance — that Madeleine might someday be found.

In the meantime, many alternative theories have sprung up.

Where Is She? Theories About The Madeleine McCann Case 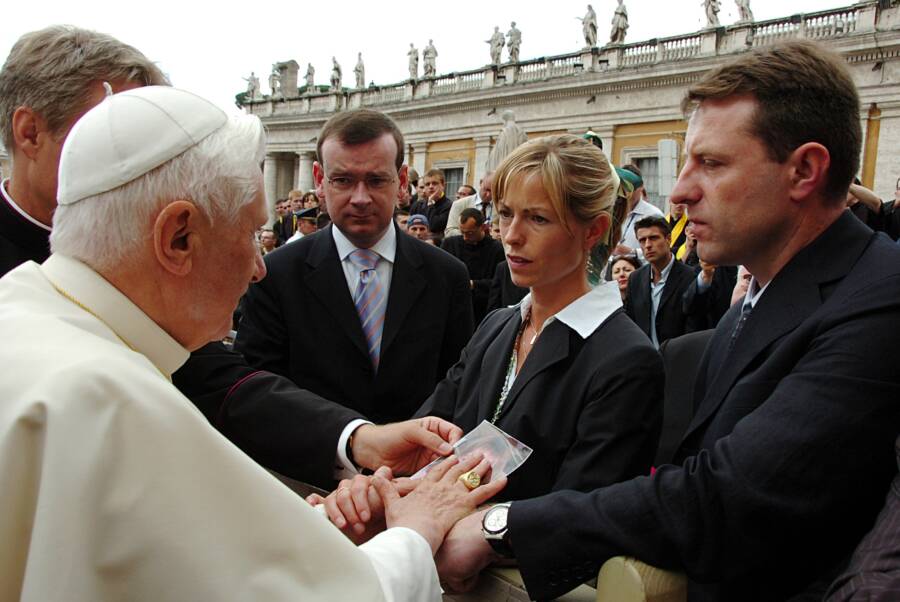 One theory centers on a potential burglary gone wrong. Madeleine is said to have been abducted after waking up and witnessing the crime. Scotland Yard hasn’t ruled this out, but it’s also likely that such a scenario would have robbers acting in panic and thus leaving obvious clues behind.

Nonetheless, police did identify four Praia da Luz locals who seemed to fit that bill. Their locations at the time of the child’s disappearance did seem to fit a burglary pattern. The men were questioned in 2014 but released when Scotland Yard found no concrete evidence against them.

Former head of the Policia Judiciaria officers’ union Carlos Anjos never considered this a valid hypothesis in the first place.

Another theory claims Madeleine was abducted by a local pedophile. Reports in 2009 found the region had been “awash with pedophiles” at the time of her disappearance. One source said at the time, “There are 38 known sex offenders in the Algarve. The area is a magnet for pedophiles.” 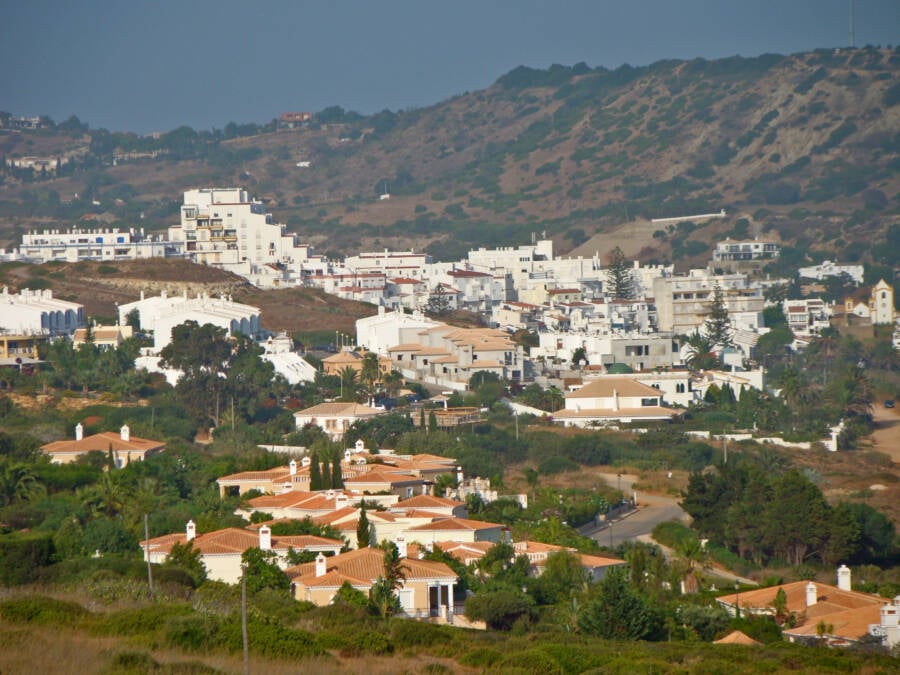 Wikimedia CommonsPraia da Luz is a holiday hotspot for many from the U.K. At the time of Madeleine’s disappearance, it’s been said that the town was filled with pedophiles.

The source continued, “There have been seven sexual assaults involving children of tourists in the Algarve in the last four years. They all have the same modus operandi as Madeleine’s disappearance — that is, a break-in at a holiday apartment and children molested. Five happened before Madeleine’s abduction, and two afterwards. One took place a month before she vanished.”

Oddly enough, former MP Sir Clement Freud — who had a holiday home there and knew the McCanns — was later outed as a pedophile. One of his former victims said she felt “uneasy” when she realized he knew Madeleine’s parents: “Nobody else would have thought Freud capable of abuse and rape but he did it to me.” 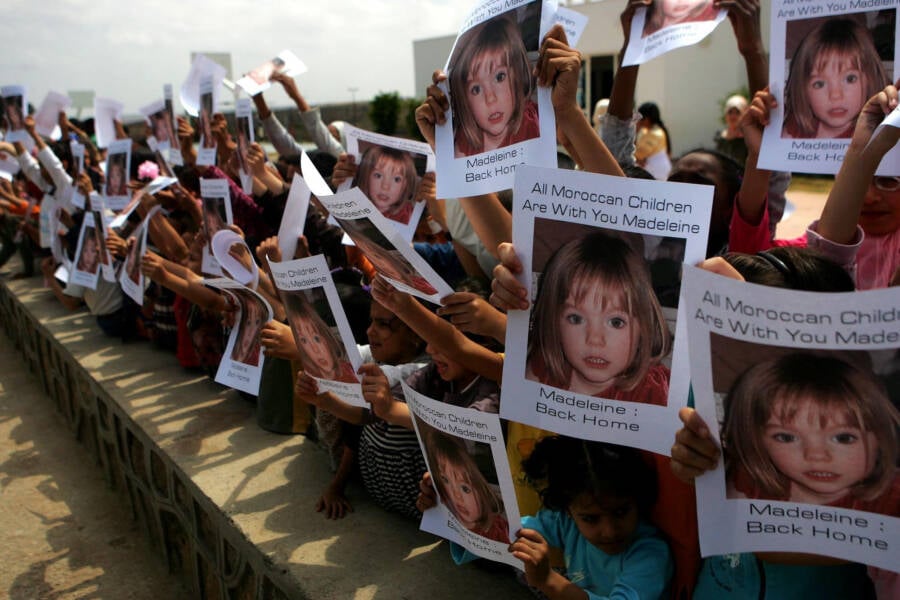 Nonetheless, investigators pointed out that pedophiles rarely risk breaking into a home to get to a child.

Yet another theory proposes Madeleine wandered outside after waking up and was hit by a car. The driver could’ve panicked and then disposed of the body. However, that theory is rather thin.

Sources from Maddie’s family claim she wasn’t even capable of opening the heavy shutters of the window, let alone climbing out to go outside. Most importantly — why would the girl have wandered into the dark, leading toward the road, rather than toward the festive restaurant area?

The most engrossing theory, particularly in a post-Jeffrey Epstein world, points toward child trafficking. Girls matching her description have been spotted in a variety of places from Europe to Africa. In 2008, police were investigating a lead claiming Madeleine was abducted at the behest of a Belgium-based pedophile ring.

The group allegedly ordered a “young girl,” and may have even taken a photo of McCann beforehand to sign off on her appearance. Other theories suggested she was abducted and taken to Lagos Marina, which was nearby the hotel, and put on a boat bound for Morocco.

A 2012 Sky News interview with Kate and Gerry McCann.

The sightings there were so convincing that the McCanns even visited the country after Madeleine vanished. Most ominously, Morocco is known to lead to a popular trafficking route to Mauritania — which was the last country on Earth to abolish slavery.

“The Mauritania line is certainly a possibility,” said former Scotland Yard detective Colin Sutton. “If someone wanted to get a three-year-old child into Africa, it’s the obvious route. The infrastructure and contacts for people smuggling are clearly there.”

The Netflix documentary The Disappearance of Madeleine McCann premiered on March 15, 2019.

The 2019 Netflix documentary The Disappearance of Madeleine McCann retells the tragic story from beginning to unresolved end. According to The Guardian, it covers the history of the Algarve as a holiday destination, interviews with journalists, and the media frenzy this case stirred up.

In the end, Madeleine McCann’s story is one that happens far too often. Whether by accidental death, intentional abduction, or sex trafficking, the child vanished without a trace. Her case remains unsolved.

Marco Margaritoff
A staff writer for All That’s Interesting, Marco Margaritoff has also published work at outlets including People, VICE, and Complex, covering everything from film to finance to technology. He holds dual bachelor's degrees from Pace University and a master's degree from New York University.
You might also like
Remove Ads
×
Follow ati On
Join The All That's Interesting Weekly Dispatch
Like Follow
Posting....