You have reached the cached page for https://gemcrust.fandom.com/wiki/Non-GemCrust_Gemsonas/Peridot
Below is a snapshot of the Web page as it appeared on 5/4/2021 (the last time our crawler visited it). This is the version of the page that was used for ranking your search results. The page may have changed since we last cached it. To see what might have changed (without the highlights), go to the current page.
You searched for: did peridot use her gem ring We have highlighted matching words that appear in the page below.
Bing is not responsible for the content of this page.
Peridot | GemCrust Wikia | Fandom

This article is about the Non-GemCrust Gemsona. You may be looking for another Peridot.

Peridot is a Gem, and an original character created by Peridot09. GemCrust has drawn art of this character as a commission.

She has an appearance similar to that of other Peridots, as that is what she is.

Peridot was lime-green skin and yellow-green hair, but her true eye colors are unknown due to the lemon-yellow visor she wears. Her hair is also styled into a tetrahedron shape, though slightly unkempt, as evidenced by the frayed "angles". Her gemstone in embedded in her left forearm.

Peridot still wears her white tank top, which now sports a yellow star in the center. She now wears light brown shorts with with matching socks.

Peridot is a pretty chill Gem; she doesn't get angry over little things. She can be a bit goofy at times. She doesn't fear the Great Diamond Authority. Originally on Homeworld, however, her personality was pretty bland, as she was filled with extreme boredom.

Peridot was on Homeworld only for a week, but felt really bored there. One day, her Hessonite took her to Earth on a mission to investigate the planet. Peridot immediately fell in love with it and abandoned her limb enhancers.

Hessonite found them and went back to Homeworld, only to come back with two Jaspers to capture Peridot, who refused to go back. While one of the Jaspers poofed Peridot, the other one tried to protect her – but was spared by Hessonite who didn't report her betrayal to the Diamonds. Upon reforming, Peridot officially defected, but eventually had to deal with the Diamonds because her Hessonite returned. She luckily escaped and went back home.

She lives alone in a house given to her by a human named James. Peridot also writes in a book ever since she learned how to write in English. When visiting Beach City (her home not far from there) she sees the diamond hand ships heading to the Crystal Temple. She heads there and meets the Crystal Gems for the first time. She helps battle the diamonds and learns Steven is Rose Quartz and Pink Diamond.

During "Legs From Here to Homeworld," she goes back to Homeworld with the gems. Later, during "Together Alone," she gets poofed along with the others during the ball. She reforms, having Steven pull her out of her gem, but not staying fused long enough to become one temporarily fused with her. She enters the head ship with him and was placed under White's control. After dealing with White and helping heal the corrupted gems, she went home.

She wasn't present during Steven's encounter with Spinel. During "Welcome to Little Homeschool," she attended Amethyst's class. She also helped set up Bluebird's welcome party.

Peridot didn't return to his house until the episode "I am my Monster," where she had warped in to visit only to discover Steven in his monstrous state. She helped the others get Steven back to normal. In "The Future," she does say her goodbyes to him at Little Homeworld, and she was rather emotional.

When she met him, she didn't have time to react to him being a hybrid, since she dropped in as Peridot got poofed and shortly after saw Steven get crushed. She seemed to start to like him during "Legs From Here to Homeworld."

Peridot was happy when she found her. She was especially amazed by the fact that she was a fusion.

Amethyst was the first gem Peridot actually made contact with in "From legs here to Homeworld" as they both have similar personalities and their forms look similar.

Peridot didn't have much of a reaction to Pearl. She is rather indifferent of her.

Bismuth was surprised to see another small Peridot like her. She was amazed at Peridot's mace proficiency.

After meeting her on Homeworld, she grew attached to her. She is also considered her first crush.

After meeting her on Homeworld, she grew a liking of Lapis.

Peridot doesn't care much for Yellow, but Yellow finds her annoying which is why she poofed her during "Together Alone."

Peridot kinda would make fun of Blue because of her constant mourning. This is due to Peridot not knowing who Pink Diamond was.

Originally, Peridot did lack fear of the authority until she heard about White. Peridot doesn't know what to think of her, but she gets chills thinking about White. 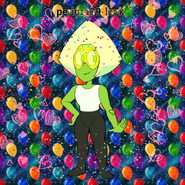 Picture made by Perla Legionario.
Add a photo to this gallery
Retrieved from "https://gemcrust.fandom.com/wiki/Non-GemCrust_Gemsonas/Peridot?oldid=65422"
Community content is available under CC-BY-SA unless otherwise noted.